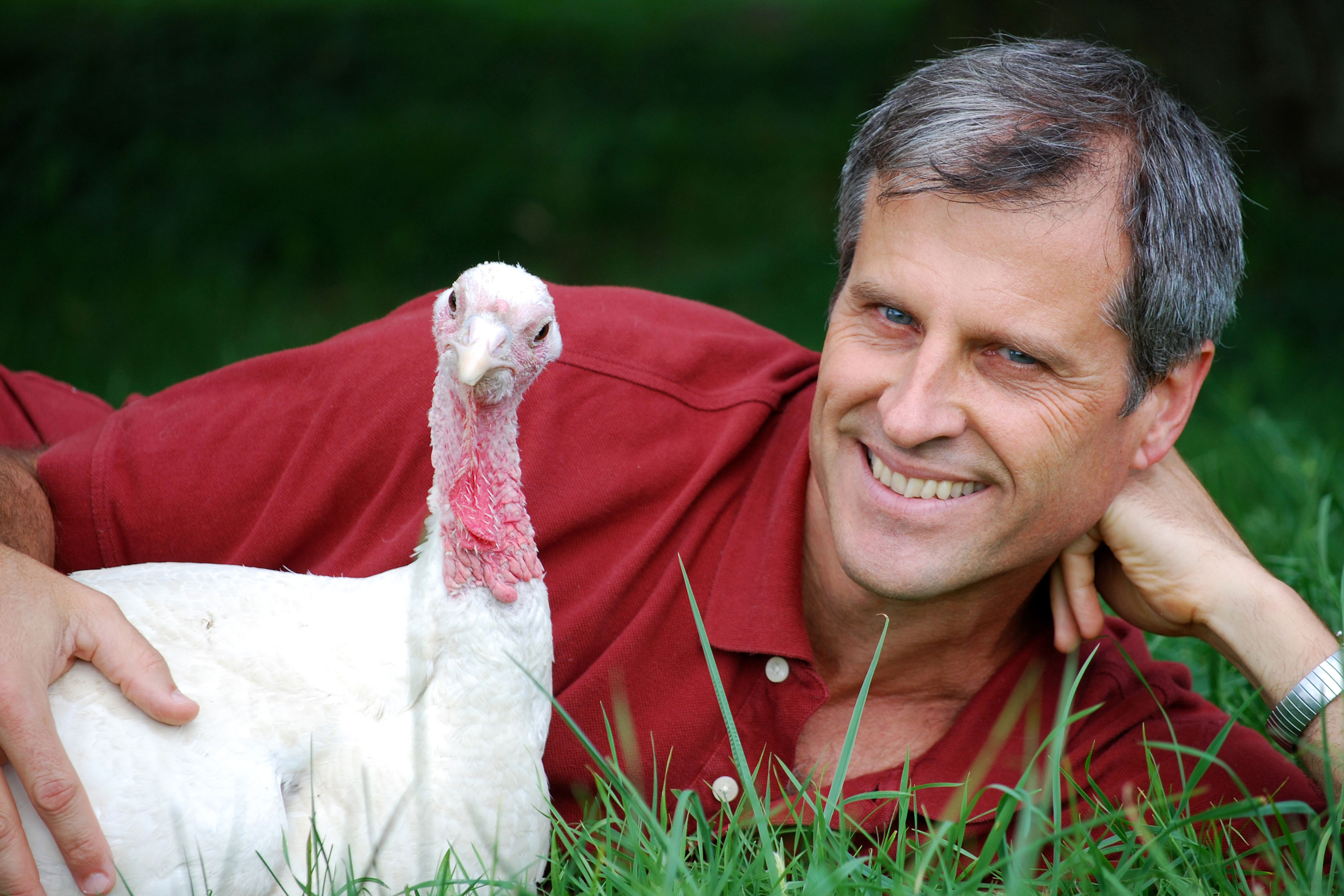 Gene Baur is the president and co-founder of Farm Sanctuary, an organization whose mission is to promote compassionate living through the rescue of farm animals, education and advocacy. A vegan since 1985, Baur has been called "the conscience of the food movement."

"Farm animals, like all animals, have feelings," Baur says. "They have complex cognitive abilities... and they deserve to be treated with respect and compassion."

He spoke with Earth Eats when his speaking tour made a stop in Bloomington, Indiana.

Annie Corrigan: How did a Hollywood, California kid get into farm animals?

Gene Baur: I grew up wanting to make a positive difference in the world is the bottom line. As time went, I learned about different things. I got involved with human rights organizations and environmental organizations, then I learned about factory farming and the many problems caused by it, and it was an issue that was not getting a lot of attention in the mid-1980s, so I co-founded Farm Sanctuary, and I've been doing this work ever since.

AC: And now it's headline news when stuff happens in factory farms. I guess we've come a long way, would you say that?

GB: I would say we've come a long way in terms of awareness. People are now starting to think about the fact that these animals are treated badly on factory farms, and more and more citizens are starting to make choices that are different in terms of how they eat and are starting to eat more plant foods. They're going to farmer's markets, participating in community supported agriculture programs, and there are more and more vegan restaurants and vegan items on the menus of mainstream restaurants. So, there are some really good things happening in terms of awareness, but we still have billions of animals that are treated very badly on factory farms. There's still a lot of work to do.

AC: Let's talk about the story of one of the animals that your organization has saved.

GB: Yeah well, how about Opie. He's a calf I found at a stockyard. He was sent to the stockyard on the day he was born. He was still wet from afterbirth, and he was there to be sold at the auction, but he was very sick and he fell and he was left to die in an alleyway. He was dying of hypothermia. So, I went to the stockyard worker and I asked what was happening with the calf, and he said he had to bury him later today. I said what if I take him off your hands, and he said sure go ahead. I took the calf to a nearby vet who treated him and he ultimately recovered and ended up weighing close to 3,000 pounds. He lived a good long life at Farm Sanctuary.

It's wonderful to see animals who had been so mistreated and neglected and denied basic humane consideration come to the sanctuary, be given care and watch them recover. As their lives are transformed, in a way so are ours. It's a beautiful thing to see.

AC: I'm reluctant to ask this next question because I know what you're going to say. Tell me some of the things you've seen when you've visited factory farms.

GB: Well, I've found living animals literally thrown in trash cans or left on piles of dead animals, and whenever possible we rescue those animals. I've also seen animals put in cages, in crates, packed so tightly they can't even turn around or stretch their limbs or move for their whole lives. These animals sometimes have bruises and abrasions on their bodies from constantly scraping against the metal bars of their enclosures. I found animals too sick to walk being dragged onto trucks and taken to slaughter to be used for human food. Sometimes they're pushed with forklifts, dragged with chains. The bottom line is that these are living, feeling animals, and they deserve better. They deserve to be treated with compassion and respect. And how we treat other animals says an awful lot about us.

So, I think we need to really examine our food system. At the end of the day, we should make food choices that we feel good about instead of saying 'Don't tell me, I don't want to know,' which is too often what people say when they hear about factory farming or when the topic comes up.

Also, it's important to recognize that we can live and do very well by eating only plant foods and not eating any meat, milk or eggs. I've been a vegan since 1985, and there are many other people who are now adopting a vegan lifestyle for health reasons as well as for environmental reasons and also because they care about animals. So, just to recognize that that is an option that people can choose.

AC: Then the next logical question is, in your ideal world, would we all be vegetarians or vegans?

GB: In an ideal world, we would not be killing and eating other animals, in my ideal world. But each person has their own opinion and may have another vision of what the ideal world looks like. But, from my standpoint, when you are raising animals and then killing them -- killing is an inherently violent act, and it's one that we don't need to engage in. I think it's important for us to recognize the facts of the matter and then ultimately to make choices that are aligned with our own values.

For me, being vegan is a lifestyle. It's almost like a religion. I would love other people to share my lifestyle and my religion just because I think it makes a lot of sense, but I also recognize that everybody has their own opinion, and that I can't answer questions for other people, they have to make their own decisions.

What I would encourage, though, is that people make decisions about their food that are aligned with their own values and aligned with their own interests, to look clearly at the kind of food system we're supporting and to be conscientious about it. And I think that when that happens, a lot of people are going to stop supporting the factory farming industry. I think a lot of people are also going to decide that killing animals is a violent act that's not necessary and will decide to become vegetarian or vegan. But that's up to each person on their own to decide.

Also, when we talk about interests, there are assumptions about what we need to eat for nutrition. A lot of people think we need to eat meat for protein or for some other reason, or that we need to drink cow's milk to get calcium so we don't get osteoporosis. Those are complete myths. I've been a vegan since 1985. I get everything I need from plant foods. In our country, we drink a lot of cow's milk and we also get a lot of osteoporosis. We need to look at the empirical evidence and then ultimately make our own choices, but those choices should really be informed instead of based on assumptions and habits that we grow up with.

You know, I grew up eating meat, but it wasn't a conscious choice I made. It was something everyone around me was doing. Once I started looking into the issues and assessing them, I decided I didn't need to eat any animal foods, and that's one of the best decisions I've ever made.

AC: About killing animals for food. We're a local/sustainable food show, so we talk to a lot of farmers. This one particular farmer is named Jim Fiedler. He raises certified organic, grass-fed, free range cows, pigs and chickens in southern Indiana on the Ohio River. He said, "We identify our pigs as happy pigs. They have one bad day, and I wish that's all I had in my life." What would you say to that?

GB: I would say that it's good that these animals are being given some decency in their lives unlike most animals that are raised for food.

But I would also say that in many cases you have animals that are raised and slaughtered, and they're being marketed in a way that sounds a lot better than it is. I cannot speak to this particular situation, but the term free-range, for example, makes people believe that these animals are outdoors free ranging. But free range only requires that animals be given access to the outdoors, and that's not defined. So, you often have animals raised in warehouses with a small door that goes to a crummy little paddock, and that's technically free range when it doesn't really meet what most people would assume free range means.

I think if people are going to buy animal foods it's important to get to know the farmers, ideally go to farmers markets, maybe even visit the farms to see what's happening, because a lot of times these labels are very misleading.

More: Read part 2 of Earth Eats' interview with Gene Baur where he talks about how legislation has both help and hurt farm animals.