How Your Food Gets The ‘Non-GMO’ Label 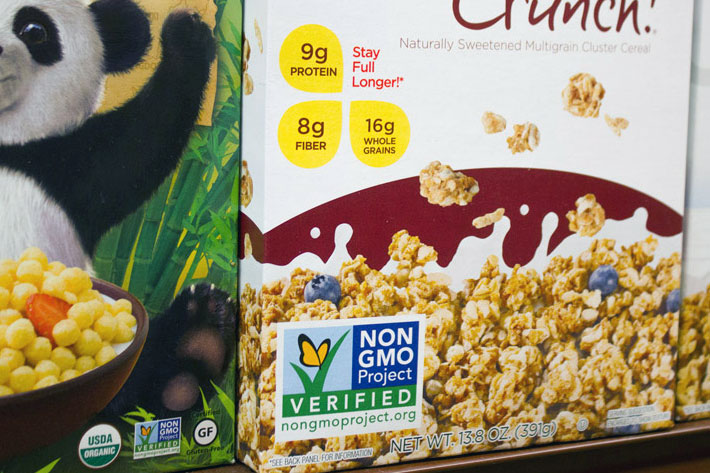 Demand for products that don't contain genetically modified organisms, or GMOs, is exploding.

Many food companies are seeking certification that their products don't have any genetically modified ingredients, and not just the brands popular in the health food aisle. Even plain Cheerios, that iconic cereal from General Mills, no longer contains GMOs.

"We currently are at over $8.5 billion in annual sales of verified products," said Megan Westgate, executive director of the Non-GMO Project, the main supplier of non-GMO labels.

To receive the label, a product has to be certified as containing ingredients with less than 1 percent genetic modification. Westgate says that's a realistic standard, while totally GMO-free is not. She says natural foods stores began the process of defining a standard, involving other interested players along the way, including consumers. Now, General Mills is just one of the big food companies selling non-GMO products.

Sales of food labeled as "Non-GMO" ballooned to over $3 billion in 2013, according to the Wall Street Journal.

"Interestingly, with all of this traction in the natural sector," Westgate said, "we're increasingly seeing more conventional companies coming on board and having their products verified."

But how does a company get into the non-GMO game? They might call Food Chain ID, a company in Fairfield, Iowa, that can shepherd them through the process. It's one of the third-party auditors that certifies products for the Non-GMO Project.

The demand is now very, very high and it has been for probably over a year in particular.

"We start looking at ingredients and we identify what are all the ingredients?" said David Carter, Food Chain ID's general manager. "And of course the label itself doesn't always identify all of those, so we need to be sure that we have a list of all the processing aids, the carriers and all the inputs that go into a product."

Next, they figure out where each thing came from. If there's honey in the cookies, the company will have to show that the bees who make that honey aren't foraging on genetically modified corn. When there's that risk, even the chance an ingredient could contain a genetic modification, DNA testing is in order.

FoodChain ID has a lab where a machine can extract the DNA from ingredient samples in order to analyze it. If that test finds no evidence of GMOs, the ingredient can go in the cookies. Carter says he can barely keep up with the number of inquiries coming in from companies that want certification.

"The demand is now very, very high and it has been for probably over a year in particular," Carter said.

It may take hundreds of dollars for some products to get a "Non-GMO" label, depending on how many ingredients are already verified as being GMO-free.

Even with the added interest, non-GMO products remain a small fraction of the marketplace. More than 90 percent of corn and soybeans grown in the U.S. contains genetically modified traits. And those two crops are ubiquitous in processed foods like packaged cookies. Still, if the current trend continues, it seems likely that some farmers will start considering going back to seeds without GMOs.

"We are a very small company," Paez said, "so our strategy is to find niche markets for farmers that are looking for non-GMO products."

Farmers pay a premium to grow crops genetically modified to withstand pests, and so they can use herbicides to kill weeds. Paez and his wife, Mary Jane, hope to develop seeds than can achieve the same yields without those expensive, patented traits. This past season, they grew test plots on a farm in Boone County, Iowa, which they harvested this fall with an ancient red Massey Ferguson combine.

Paez studies the effectiveness of each hybrid seed variety. It's slow and meticulous work. But the careful data collection is key to determining whether a new hybrid can be competitive in the marketplace.

"One of the main things is yield," Paez said. "Stand-ability, consistent performance, disease tolerance, things like that."

If these seeds make the grade, farmers could potentially save some money on seed. And their grain might fetch a premium, especially as demand for non-GMO animal feed grows. Because the only way to end up with non-GMO certified meat is to raise animals on non-GMO feed.