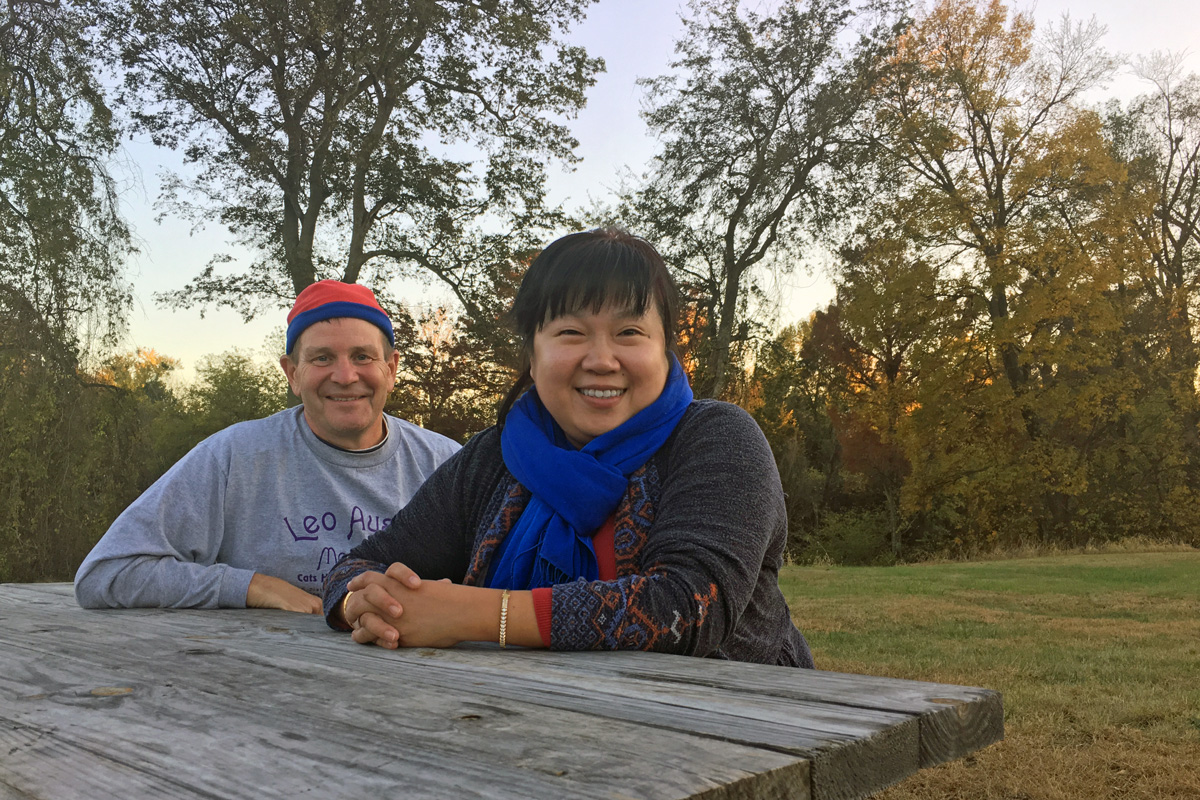 "It's real just gooey and thick and mushy. But it's real white."

Maybe you've never heard of surimi, but you've likely eaten it before; it's in imitation crabmeat. But you've probably never had this kind. This surimi is made from a fish many people wouldn't expect â€“ or eat.

It's made from Asian carp.

Carp is a catchall term for fish in the family Cyprinidae, a large group of fish native to Europe and North America that have also been domesticated across Asia.

There are over 1700 species of carp -- silver, common, grass, black, and mud, to name a few -- and a lot of them are known as boney, bottom feeders that have too strong of a "fishy" taste.

In fact, if you Google "carp," the first phrase that comes up is "carp trash fish."

But the Asian carp isn't a trash fish. A filter feeder cultivated as part of a multi-tiered Chinese aquaculture system over 1,000 years ago, Asian carp was imported by farmers to the U.S. in the 1970s to help keep commercial fishponds clean. Asian carpÂ don't eat other fish. Rather, they eat plankton, which is great news for commercial fishponds, but bad news for bodies of water where native fish rely on that same plankton for their food supply.

Though many think Asian carp escaped the commercial fishponds during floods in the 1990s, Asian carp lived in the Mississippi River basin since before 1990, though exactly how they got there is unknown.

Now, Asian carp are found in bodies of fresh water throughout the United States, like the Mississippi River and Kentucky Lake. They're an invasive species and a big problem for both ecosystems and the fishing industry.

But where most see an enemy, Fin Gourmet owners Lula Luu and John Crilly see an opportunity. They're in the business of changing minds about Asian carp, and about people.

"There are many, many false perceptions of this fish," Fin Gourmet owner Lula Luu says.

"We always get tickled when we go to farmer's markets or food demos, and we say â€˜try the fish.' â€˜Oh, I'm not going to try that trashy fish.' â€˜Well have you ever eaten it?' â€˜No, but it's terrible.' â€˜Try it. You can spit it out, won't hurt my feelings.' â€˜Oh, that's delicious,'" she says. "That's exactly how many people see our staff."

Fin Gourmet's hometown of Paducah is a town of about 25,000, nestled between the Mississippi River and Kentucky Lake, near the confluence of the Tennessee and Ohio Rivers.

Earlier this year, Kentucky was named one of five states hit hardest by the prescription pill and heroin epidemic.

Lula says they've always wanted to be a triple-bottom-line business, one that has a positive social, environmental, and financial impact.

Part of their positive social impact is whom they hire. Fin is a second chance employer. They team of about 15 people is comprised of some of the most vulnerable people in the community -- at-risk women, former addicts, and people convicted of felonies.

"The way I grew up, you worked hard, you went to church, and you were involved in drugs and alcohol," Amanda says. "It was a very confused, ride-the-fence type of life."

She was raised in a small town in western Kentucky, where she remembers moving around a lot, battling anorexia and bulimia as an adolescent, being exposed to drugs as early as five years old. She says back then, those experiences were normal.

Like hundred of thousands of other vulnerable Americans, Amanda developed an addiction to heroin in her late teens.

"It numbed my pain, it numbed my feelings. It just numbed me completely," she says. "It took away the pain, but it made my life living hell."

Amanda has two young boys, and at one point during her addiction, they were taken into state custody. After court battles, foster families, and relapses, her parental rights were eventually terminated completely.Â

"I strived every day since I was 17 to be somebody, and have something," Amanda says. "To take care of my children, and give them something better that what I had in life."

She found herself in a position many addicts have been in before -- with absolutely nothing to lose.

"I realized that death didn't even scare me. I overdosed like eight times, and for some reason, God gave me that eighth breath."

At that point, she knew she had to change - but she didn't know how.

Two days later, she was arrested.

It turned out to be the best thing that ever happened to her. The judge told her she "was going to just sit for a while." Amanda was sentenced to jail time, and instead of being defeated by her addiction and her sentence, she decided to use that time to get sober.

"When I hit my rock bottom and I knew that I was never going to be anything in life, it just motivated me," Amanda says. "I turned that from a negative to a positive and I said I didn't care what it took, I was going to get sober."

The Mississippi River is a very long river. It would be an incredible opportunity to replicate Fin. There are a lot of people who could use this sense of hope.

After serving her sentence, Amanda ended up at a 6-month residential recovery program called Ladies Living Free, an organization Lula worked with to provide graduates with employment opportunities.

"Lula had called up there and said, â€˜We're a second chance company, we like to reach out to people that would like a second chance in life.' So I called them every week for like, a whole month, and I told them I wanted to learn everything."

"She kept calling! I mean, this girl would not stop." Lula recalls. "So we hired her."

Amanda wanted to learn everything she could about the fish business. She often worked 16â€“18 hour days, fishing at night, and heading straight to the processing site the next morning.

"I worked 110 hours every two weeks," she says. "There was never a moment where I was not doing anything."

It was exactly what she needed.

She stayed busy to kick her addiction, and it worked. She's been sober since February 2014. But her addiction was just a symptom of other underlying problems, and some of her other old habits were ever harder to overcome.

"Used to, nobody could be behind me," Amanda says. "I'd be like, â€˜Listen, you've got to get somewhere else, you know you cannot stand behind me.'"

Lula says Amanda did things that were off - that it was disrupting the team, and Amanda agrees.

"I had a lot of rough communication skills," Amanda says. "I was still learning not to be so defensive."

Lula wasn't sure how Amanda would take criticism, but she knew she and John had to try to get through to her.

"We talked to her. And she took it not as maliciousness, she took it as, it's to better herself. She truly listened. And she improved."

Now, Lula says, she and John can't imagine having anybody else help run operations at Fin.

"She's incredible. Of all the different managers that I've had and hold dear, she has surpassed all of them. She really believes in what we're doing."

"I'm fighting every day to be the best person I need to be," Amanda says. "By being here and learning and watching Lula and John and how they communicate with people, I just really learn from how they handle situations."

Fin provides their second chance employees with meaningful work and steady income, but Amanda says it's the continued support, flexibility, and understanding that lift them up the most.

"I have gained everything within two years that I've tried my whole life to gain. I'm sober, I'm happy, I can love somebody else â€“ you know, I've gotten married, and so much more of just peace, joy, and love that I never had in my whole life."

Lula says they'd love to continue to help bring back the inland fishing industry by expanding their business to other communities battling addiction and invasive fish species.

"The Mississippi River is a very long river. It would be an incredible opportunity to replicate Fin. There are a lot of people who could use this sense of hope."

They've positioned themselves as a high-end, made-in-the USA product. Right now, they sell to lots of fine dining restaurants in Kentucky where it's often not called carp, but Kentucky Blue Snapper.

Sometimes, that's the only way to get people to eat it. And then, as Lula says, "it sells like crazy."Â

"I've already identified my next species. I want to deal with snakeheads."

It might be a good idea to change that name, too.