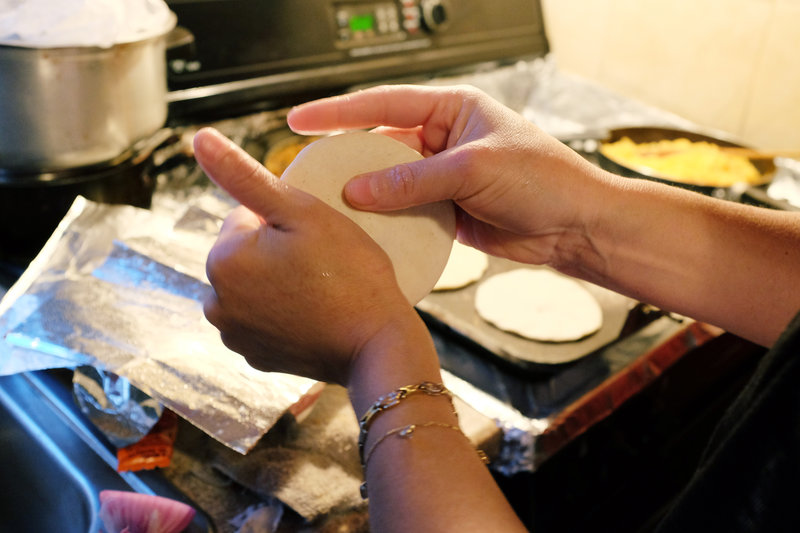 In a narrow alley just behind a busy Queens street, HernÃ¡n's kitchen makes more than 4,000 churros each day for street vendors to sell across New York City. From 3 a.m., hours before nearby shop owners unlock their front gates, the kitchen fills with the sound of churro batter beating against the sides of large industrial mixers.

The kneaded dough is shaped by a long dispenser that drops it into sizzling hot oil. The churros - long, striated doughnuts - are finished with a sprinkling of sugar and cinnamon and stacked high on baking trays by HernÃ¡n's wife.

HernÃ¡n moves quickly, grabbing dough from the mixer before hurrying to the fryer so the churros are ready when his vendors come to pick up their orders. Time is of the essence - he can't risk losing any more buyers.

It took HernÃ¡n 14 years to build up his wholesale churro business but only one week, following the election of Donald Trump, for him to lose half of his customers.

"My business has been affected greatly this year. My vendors are scared they will get caught and deported," HernÃ¡n says, speaking in Spanish. We are not using his or other vendors' full names because of their fear of deportation. "They have left and started working other types of jobs now."

Within the first 100 days of Trump's presidency, Immigration and Customs Enforcement (ICE) arrested more than 41,000 people - an increase of 37.6 percent from the previous year. The surge in ICE arrests across the nation, coupled with other immigration policies of the Trump administration, have spurred a noticeable drop in vendors selling on New York City streets, as well as a decline in the number of street vendor customers.

"I remember the first few months of [Trump's presidency] there was no one on the streets in Queens. There were not a lot of vendors out or people walking to be the customers of vendors," says Sean Basinski, director of The Street Vendor Project, a nonprofit organization that provides legal representation and advocacy for street vendors in the city.

There's no statistical information on the economic impact the Trump administration's immigration policies have had on street vendors, many of whom are undocumented immigrants. But in the Queens neighborhoods of Jackson Heights, Corona and Jamaica, where selling food and other items on the street is common practice, some vendors say they have lost a significant portion of their income.

"There was a period that there were a lot of rumors that ICE was on Roosevelt Avenue [a busy commercial street in Jackson Heights] - that there was an ICE van there by the subway," Basinski says. "I don't think that was true, but people thought they were going to get picked up."

Last year was a turning point for HernÃ¡n's churreria. He had finally earned enough income to afford a larger facility with industrial equipment and an additional baker. But with his income now cut in half, he has returned to the streets to sell churros. On Sundays he drives with his wife to suburban Westchester and Pennsylvania to sell his churros to churches with large Latino congregations.

HernÃ¡n came to New York 17 years ago from Ecuador. A few weeks after arriving, he got a job at a car wash, where he made $30 a day. He recalls never having had that much money in his hands before.

But after watching the quick exchange of money by a young churro seller at a train station one night, he decided to become a churro vendor himself. When he realized he could make more money supplying other vendors as a churro baker, HernÃ¡n convinced a Mexican baker to teach him the craft. He then began building a network of vendors to buy his churros.

In Queens neighborhoods such as Jackson Heights and Corona, where more than 57 percent of the total population is foreign-born and over 100 languages are spoken, street vending provides an opportunity for many immigrants to make a living. But for some, that's become increasingly difficult.

Glady, a street vendor who sells shish kebabs, says she has lost half her income this year. Even on this fine day, she has had few customers.

"I haven't even made $50," she says in Spanish, as she heats up the grill. "The change in president has caused people to not want to spend their money because they might arrest us one day. A lot of my friends have left."

Ruth, a vendor working across the street from Glady, waits for familiar faces to buy her chicharron (pork cracklings), braised pork and beef cuts stacked up high over a hot flat grill. She believes customers aren't buying because they are afraid to be visible and are saving money in case they or members of their family are deported.

"A lot of people don't come like before, because they don't want to risk [it]. People are avoiding a lot of cost because if something happens to them, at least they have some savings," Ruth says in Spanish. "They don't have that liberty to buy like before we had this new president."

There are an estimated 20,000 street vendors in New York City. In 1981, the city capped the number of street vendor permits it issues at around 5,000. This means that roughly 80 percent of vendors are unable to operate their food businesses legally.

Matthew Shapiro, senior attorney at The Street Vendor Project, says many immigrants are unable to find traditional jobs. Street vending is an easily accessible line of work that allows them to make a living. But unlicensed vendors run the risk of being ticketed or even arrested by local law enforcement. In the current political climate, those risks are magnified for undocumented vendors who peddle without permits.

Any contact undocumented immigrants have with the criminal justice system is widely seen as raising their vulnerability to being detained by ICE and potentially deported, Shapiro says.

"Since we've had such a hard line immigration stance coming out of the federal government, this puts them at further risk," Shapiro says. "So if they are out there selling and breaking the law, that could result in higher-level immigration consequences."

For example, some immigration attorneys express concern over the increase in ICE arrests in and around courthouses.According to the Immigrant Defense Project, these arrests in New York increased by 900 percent in 2017.

While some vendors continue to struggle to make a living on the street, others have sought new, less visible occupations. One vendor, Julia, used to sell lunches from a street cart without a permit. But for the past couple of years, the mother of three has been selling food from her home to reduce her risk of being arrested or detained.

"If I keep going to court [to pay tickets for vending without a permit], they could deport me,"Julia says, in Spanish.

Like other street vendors we spoke with, Julia has seen a drop in income this year.

Julia was born and raised in El Salvador; 15 years ago, she settled in Nassau County, Long Island, in a town with a large immigrant population. She began selling food throughout the neighborhood in order to sustain her family.

Then one night, ICE knocked on her door at 2 a.m. and arrested her partner. The agents entered their bedroom and woke them. At the time, Julia was pregnant. She had no idea how she would support her family after the father of her children was deported.

"You can imagine how I feel when I see ICE cars [even now]," she says. "I stay paralyzed."

In the early evening, a light bulb attached to an extension cord illuminates a stock pot of boiled corn (elote) and atole (a corn beverage infused with cinnamon, sugar and milk) on a folding table in Julia's driveway. As curious neighbors stop by for a warm beverage, she scoops the steaming atole into styrofoam cups and slathers cobs of corn with mayonnaise, crumbly white cheese and hot sauce.

Although Julia once made $500 a week as a street vendor, she now settles for the $100 she makes from selling outside of her garage. Her new approach avoids the fines she once received, and she says she now sleeps with the peace of mind that she and her daughters are safe.

Basinski of The Street Vendor Project says that a large decline in street vendors and their income could have significant cultural and economic implications for the city.

"Who could imagine New York City without street vendors?" Basinski asks. "If we don't have the streets as a home for small businesses to start and to thrive and grow, eventually that's going to affect the economy of New York City."

A 2012 study conducted by the Institute for Justice found that street vendors contributed 17,960 jobs, $71.2 million in taxes and $192.3 million in wages to the city's economy that year.

HernÃ¡n, who once dreamt of expanding his churros business nationwide, has now put his plans on hold. If more of his vendors quit selling churros, he worries that next year will be the last for his churreria. "I will have to close my business and go back to selling churros by myself," he says. "Only the bravest will sell next year."

This story is a collaboration with Feet in 2 Worlds. A version of this story originally appeared on the Fi2W website.