Why Fast-Casual Restaurants Are Surging 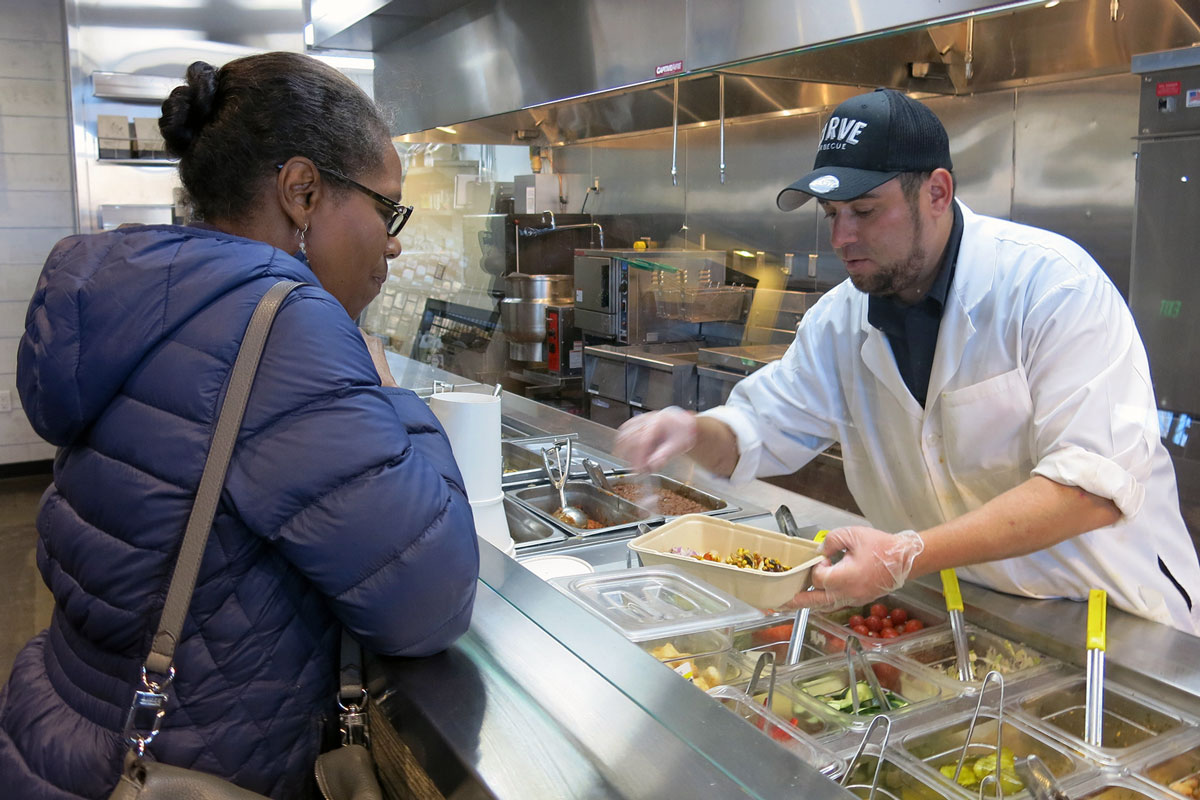 The restaurants borrow ideas from both fast food and upscale sit-down restaurants, catering to customers who want food fast, inexpensive and customized. Their success â€“ having grown more quickly than either fast food chains or full service restaurants in recent years â€“ is part demographics and part economics.

Colorado is arguably the cradle of fast-casual. The Denver, Boulder and Fort Collins metro areas boast the highest numbers of fast-casuals per person in the country. The state is home to both industry pioneers like Chipotle and Noodles & Company, and buzzed-about newcomers like the recently renamed Modern Market and Smashburger.

At a shopping center in Glendale, Colorado, Laquardra and Jason Staples are sitting down to lunch. The restaurant is brand new, a sleekly-designed barbecue spot called Carve. The interior is styled with exposed wood beams, chrome metal chairs and stainless steel.

"We're just out running errands so we just stopped in for a nice lunch," Laquardra Staples says, while she pokes a fork at a cup of sweet potatoes and a small pile of burnt ends.

Online reviews call Carve it the "Chipotle of barbecue," and it gives off that vibe. It's quick, with meat and side dishes arranged on butcher paper, and pushed down an assembly line. Meals run about $10.

"I usually do the whole fast casual thing when I'm at work on my lunch break and the food is usually a couple notches up from fast food," Jason Staples says.

Folks like the Staples are driving this push to fast-casual dining. They're in their 30s, and both are professionals. They work busy jobs on different schedules with little time to cook at home. But when they get hungry, they're not pulling up to drive-thru windows at fast food joints.

(Millennials) are eating out 6 or 7 times a week. They want groovy, they want spicy, they want bold. That's what these fast-casuals aren't afraid of. They're putting flavor into their food.

"I graduated from culinary school and I eat out more than I cook at home. It's kind of a shame," Jason Staples says.

Despite the higher price of a fast-casual meal, enough people are thinking and eating like the Staples to make it more than a fleeting trend. That's something Carve's owners are banking on.

"They're looking for a full-service quality product in a McDonald's style efficiency. And that's really where fast-casual comes from," says Mitch Roth, the CEO of the restaurant group behind Carve.

Traditional sit-down restaurants struggled after the recession. So did fast food. During the same time, fast-casuals exploded. In the three years after the 2008 recession, fast-casual visits rose 17 percent, while other sections of the restaurant industry lagged. Just from the Carve parking lot alone you can see two other fast-casual chains with expanding footprints: Tokyo Joe's and Modern Market.

"I think with the number of young people moving to Denver, the active lifestyle in Denver, it promotes and encourages restaurateurs to operate a certain way," Roth says.

Colorado's Front Range has become a test market for these types of restaurants. Because eaters in the state first gave approval to fast-casual innovators like Chipotle and Noodles & Company, other restaurateurs see the state as a place to launch a new concept.

"The millennials are the one who are really pushing this," says Katie Sutton, a consultant and development chef with Colorado-based consulting group Food and Drink Resources.

"They are eating out 6 or 7 times a week," Sutton says. "They want groovy, they want spicy, they want bold. That's what these fast-casuals aren't afraid of. They're putting flavor into their food."

Fast-casuals are now the hip start-ups of the restaurant world, and they sometimes follow the same trajectory. Here's how it typically works: A young, ambitious chef gets out of culinary school, then teams up with a business partner, increasingly someone with Wall Street credentials. They ditch the full service experience to put more money into the ingredients while cutting costs on wait staff. Eventually the chef entrepreneur decides to expand to a handful of stores.

"Then some venture capitalist comes in and purchases you," Sutton says. "That's the dream now."

"It is getting crowded," says Sue Daggett, CEO of Smiling Moose Rocky Mountain Deli, another Denver-based chain. "Not only is it getting crowded, but the economy is so much better. And so real estate prices are higher and everyone's vying for the same spaces."

In suburban south Denver, workers at MAD Greens, a fast-casual chain that serves up customized salads, are prepping for the lunch rush.

"We cook almost everything from scratch," says Dan Long, a MAD Greens co-founder. The Colorado-based chain is beginning to stretch beyond the state's boundaries with restaurants in Arizona, and planned openings in Texas. But when you're a restaurant chain that touts its locally-sourced food, expansion is complicated.

"What separates it from the fast food side of the equation is the quality and the freshness of the ingredients," Long says.

When Mad Greens opens a new store, they send people out to establish relationships with local farmers. Cooking from scratch? That takes time and some skill. All that adds up to a more expensive salad.

"It does get difficult as you get bigger. And I think a lot of fast casuals are running into that," Long says.

Even with the high concentrations of fast-casual chains in shopping centers and major metro areas, and with a recent announcement from Noodles & Company executives that they'd be closing some stores, fast-casual is years away from any sort of saturation.

That's a larger cultural phenomenon that the fast-casual boom is more than happy to capitalize on.