When Farmland Gives Way To Development 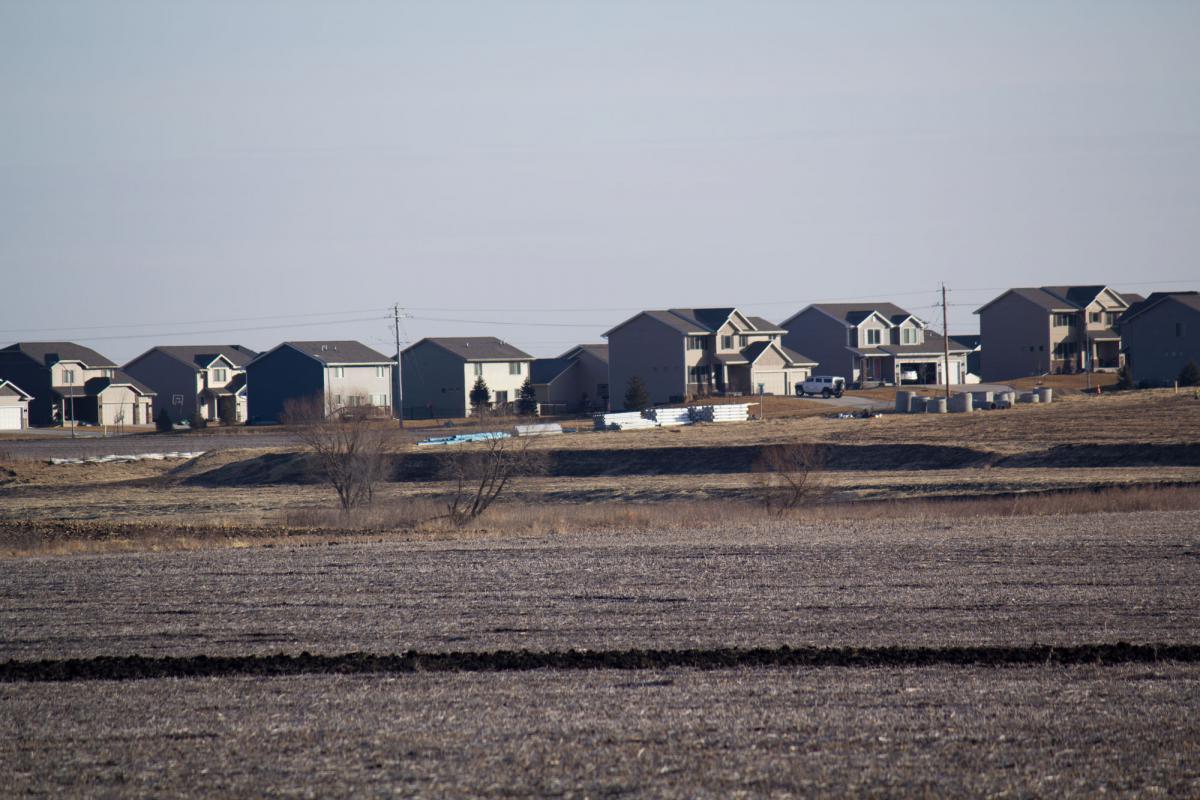 Big cities in the Midwest are gaining ground on the rural communities that, for many decades, have thrived on the edges of urban development.

Since 1980, the amount of land being farmed or grazed in the U.S. has dropped 13 percent, according to the U.S. Department of Agriculture. Much of it now is covered by housing subdivisions, big-box stores and computer-server farms.

Outward growth from metropolitan areas can strain courts, schools and traffic. It also can change the cultural and regional identity of once-rural communities - something visible on the outskirts of two metro areas connected by Interstate 35 and an agricultural heritage: Des Moines, Iowa, and Kansas City, Missouri. Harvest Public Media took a closer look:

Urban areas have expanded in Dallas County, west of Des Moines, from 1950 to last year. About 11 percent of county land has been annexed by cities. And the county population grew from just over 66,000 in 2010 to more than 84,500 in 2016, according to Census Bureau figures.

County planner Murray McConnell has been struck by how every wave of new arrivals rankles the previous one.

â€œEverybody wants to freeze the landscape as it was when they arrived,â€ he said, noting that the loudest voices who oppose things like a new housing development are not the farm families whose fields abutt the new construction, but the hobby farmers or large-lot suburban transplants.

Lori and Matthew Wiese are new farmers, former urban professionals who restored an abandoned farmhouse in the county, did a farming apprenticeship and moved their family of six out there. Now, they direct-market fruits and vegetables, eggs and chicken and will be adding beef. Their customers pick up the orders.

â€œPeople, because of the choice that we offer, were willing to drive a little bit father,â€ Lori Wiese said.

They live on a gravel road, though Wiese said some customers would prefer to drive on pavement. So, one day she was on the phone with a county official and asked, â€œIs there a plan to pave.â€

The response: No. And that's fine with the Wieses, whose road extends across the Raccoon River. They said paving it would increase traffic and take away from the quiet rural landscape they sought out.

McConnell noted that the county tries to discourage development on prime farmland. But once a city annexes county land, development is likely, he said. And it puts a strain on county services.

The historic courthouse in Adel, 30 minutes west of Des Moines, is bursting at the seams. Two new courtrooms were added a decade ago, but county clerk Anna Butler said there's already not enough space.

â€œIt's becoming more frequent over the last few months where we've run out of courtroom space when we have multiple jury trials or multiple even bench trials,â€ she said.

â€œIt's a burden on everybody. It's more paperwork on our end. It's a hassle all the way around,â€ Butler said.

The increased demands on law enforcement may be a boon to the court system. When the sheriff's department moves out of the bustling town center and into its new building, Butler said, there's a chance the county will convert the old jail into more courthouse space.

Growth is happening in the town of Adel itself, which added a wing to the elementary school, as new housing springs up to the south and east, stretching toward I-35, where, two and a half hours down the road is the northern suburbs of Kansas City.

While the amount of farmland in Missouri has held mostly steady for a decade, Clay County - undulating land crossed by streams, many of which feed into the Missouri River - saw the metro area's biggest percent change of land between 2007 and 2012 that no longer is used for agriculture.

New housing subdivisions are pushing out livestock grazing and farmland; between 1978 and 2012, the number of cattle here dropped by a quarter. And officials estimate that by 2040, five percent of the county's total acreage will be newly developed.

â€œThe trend in Clay County is, yes, it is cutting into agricultural production. Definitely. And once a farm field grows houses, it rarely goes back into farm field production, sadly,â€ the Republican and former state legislator said.

Linda Hezel lives on 15 acres about 20 miles from Kansas City and runs Prairie Birthday Farm, growing fruits, vegetables, herbs and wildflowers that end up on plates at restaurants across the Kansas City metro.

Her concerns about suburban encroachment are twofold, the first being what happens when land is clear-cut for housing developments and shopping centers.

â€œLots of parking lots and we take out whole forests now. We are capable of just grinding them up and hauling them away because of the equipment and the technology and I think that's a terrible misfortune because we don't know what's in there,â€ Hezel said, referring to wildlife and carbon dioxide emissions.

A nurse by training, Hezel's second worry is that losing too much open space could put people's health - both on a personal and a community level - at risk.

She and her husband bought their land in the 1990s, before developers took notice of the area's natural beauty and built a subdivision that abuts her property.

â€œNow, when we moved here, Oakbrook behind us was cattle. It was probably 160 acres,â€ she said. Hezel recently learned the subdivision is adding 18 more homes.

With thousands seeking more elbow room than living in a city might provide, there's a sense that community ties are breaking among those who've been out here for a while.

â€œThe thing I hear the most is the loss of local identities,â€ said T.J. Berry, a Republican state representative and the incoming executive director of the Clay County Economic Development Council. â€œSo, Liberty used to be its own community, and now it's definitely part of the suburban Kansas City area. And you don't want to lose that identity: multiple high schools rather than one high school for a community.

â€œAnd that's not just in Liberty, that's in other communities in the Northland, where they've lost identity,â€ said Berry, who grew up on a farm in Clay County.

The eastern edge of the development is in the Liberty School District, which has grown by almost 5,000 students over the last 15 years. The district's chief operating officer, Steve Anderson, said when Shoal Creek's neighborhoods really started to take off, â€œI don't know if it caught the district off guard, but there was a point where there were a lot of trailers and just trying to kind of accommodate that, that more pressing need.â€

He said the district now has a handle on its population influx, and they're still expecting to grow as the county does.

â€œThe balancing act, obviously, is to build for what's coming,â€ he said. â€œYou never want to overbuild, that would be irresponsible.â€

Some Shoal Creek kids attend school in the North Kansas City School District, which district spokeswoman Tammy Henderson said has grown by about the size of a grade school every year for at least eight years. New school buildings and upgrades are in the works, she said, and the 82-square-mile district buses now run on natural gas, which cuts the cost of covering about 2 million miles a year.

And that brings up what may be the most headache-inducing part of when once-rural areas sprouting thousands of homes: traffic.

While Clay County is convenient for people who commute to jobs in Kansas City and other nearby towns, the roads near the subdivisions and retail areas can get cramped. There's a key state highway, Missouri 152, that runs east and west, cutting through the concentrated developments at the south end of Shoal Creek.

Kyle Elliott, the long-range planning and preservation division manager for Kansas City, said 152 is a challenge at the pinch-point intersection with I-35 - a major shopping area with a Hy-Vee, Home Depot, Target and Walmart, not to mention Liberty High School just to the east.

â€œ152 is not a very long roadway and it was almost at capacity when they built a full four lanes about a decade and a half ago,â€ he said.

In fact, there was a nearly 60 percent increase in accidents at the I-35/152 intersection between 2012 and 2015, and it sees so much traffic that the Missouri Department of Transportation is planning to replace the six-lane bridge over I-35 and widen it to 10 lanes for the next wave of residents seeking a little space.

And they're coming. Shoal Creek, Elliott said, is â€œabout a half to a third built-out, so it could potentially see quite a little bit more (development).â€