Are Farmers Markets Becoming A Tough Sell For Growers? 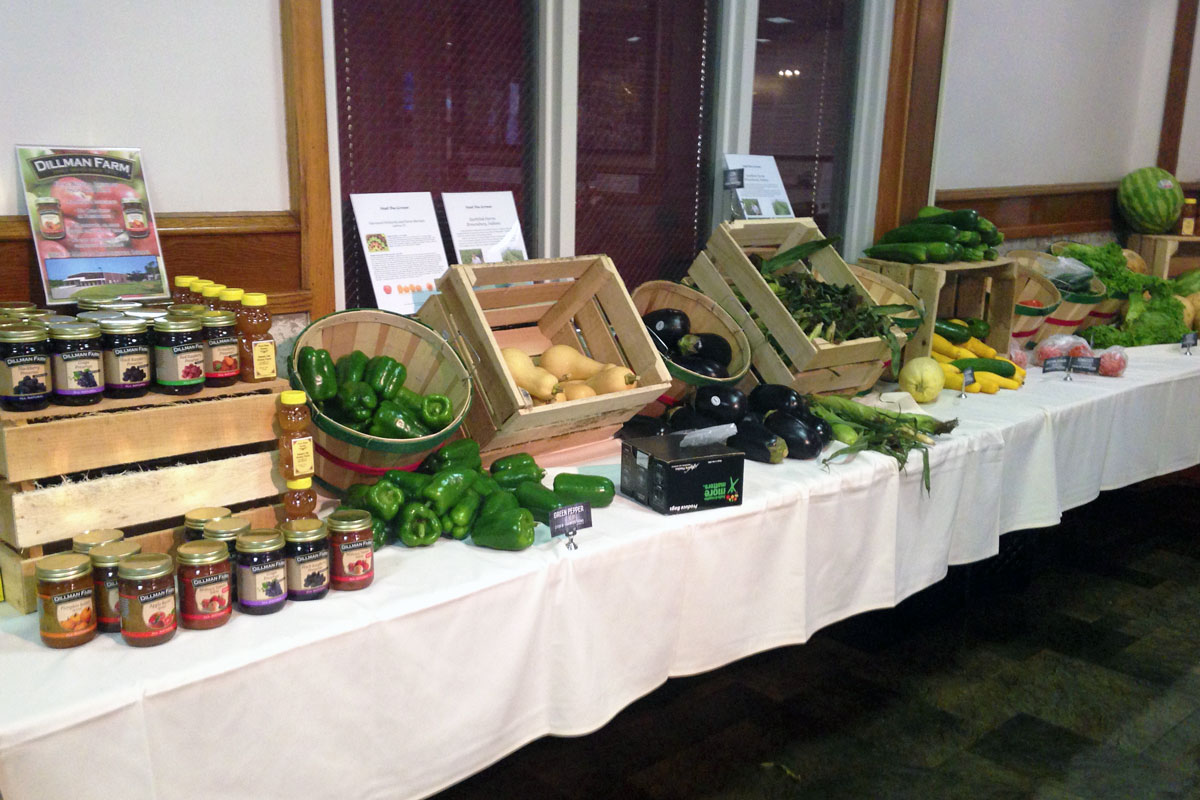 It's Wednesday morning on the Indiana University campus. Walk inside the Indiana Memorial Union, and you'll see fluorescent lights, flat-screen TVs on the walls and a few tables of vegetables in baskets.

"Today we are running a small farmers market," says Zachary Knudsen. He's the director of purchasing for Sodexo at the IMU.

Amanda Abrams rings up customers at the cash register. She runs down the list of vegetables for sale today -- kale, green beans, zucchini, yellow squash, corn, cantaloupe, watermelon and green peppers. It hasn't been too busy today, but she's sure business will pick up once students comes back to campus.

The variety is impressive and it all looks to be in pristine condition. I ask Knudsen the question you'll hear over and over again at any farmers market -- where did this food come from?

So, what we've asked our vendor to do is basically collect produce within 150-mile radius of Indianapolis. That is our definition of local. And they put it onto a list for me basically. I select 10-12 maybe even sometimes 15 items. The food got here two days ago on a refrigerated truck from Indianapolis. As far as how it was procured from the farm, I actually do not know that far into the supply chain.

And there are no farmers here today to vouch for their products, so that's where the conversation stops. That's right, no farmers at the IMU Farmers Market.

Should they even be calling this space a farmers market?

What's In A Name

"I mean, I think maybe it's a farm stand," says Steve Holt, a food and nutrition writer. He recently penned an article for Civil Eats titled 5 Ways America's Farmers' Markets Have Evolved.

You can picture a farm stand... A table on the side of a road with produce. There's a jar in which customers drop their money. And the farmer isn't there.

To talk about what a farmers market is, Holt starts with the government's definition. "The USDA says a farmer's' market as defined as a multi-stall market at which farmer-producers sell agricultural products directly to the general public at a central or fixed location, particularly fresh fruit and vegetables."

I hear from producers a lot that markets can be a tough sell from a financial and economic perspective.

There are also social transactions that take place at farmers markets between customers and producers. In some ways, he says, those transactions are even more important than the financial ones.

"I also want to make room for a broader definition of farmers markets in the 21st century that might include social media interaction and maybe an online marketplace," says Holt. "I think increasingly these virtual spaces are supplementing the physical market spaces and allowing producers to connect meaningfully with more customers than ever."

Local growers also have more buyers than ever, like distributors that connect them with institutions like Indiana University. This could explain why direct-to-consumer sales have stagnated in recent years even as the number of farmers markets across the country has ballooned.

Holt suggests this isn't a sign of decreased demand but increased supply as farmers diversify how and where they sell their food. To say it another way, farmers aren't putting all their eggs in the farmers' market basket.

"Markets are tough on farmers," he says. "You've got to pack everything up. You have to guess roughly or exactly how much produce to bring. Sometimes you're driving hundreds of miles to the market, so there's gas involved. If you don't go yourself, you pay for someone else to drive and sit there in place. You're constantly marketing your product while you're there, giving out samples, engaging passers-by, calling out what you're selling, and that can be difficult sometimes for farmers who are used to spending long periods of time alone in the fields. And so I hear from producers a lot that markets can be a tough sell from a financial and economic perspective."

Unique To The Market

Customers, too, have many more ways to engage with local food, but traditional farmers markets can still prove to be important spaces for immigrants. His Boston neighborhood farmers market caters to the large number of Central American immigrants, "And they're able to find some foods at the market here that they can't find anywhere else in the city, because producers know there's a market here for that and they are growing those foods, and people will line up before the market has even started because those are the things that sell out first."

Veggies like chipilÃ­n and hierba mora, which Holt says are popular among his neighborhood's Salvadoran immigrants.

There's nothing out-of-the-ordinary for sale at the Indiana Memorial Union Farmers Market, or let's just decide to call it a Farm Stand. Abrams says there is one thing that could draw customers.

"You can't beat the prices, because they're just pretty much set at wholesale."

$0.60 for a bunch of kale. $0.75 for a spaghetti squash. She says the IMU isn't in this to make money. They just want to provide a service to students and staff.

And perhaps cheap prices could tempt new customers to engage with local food.