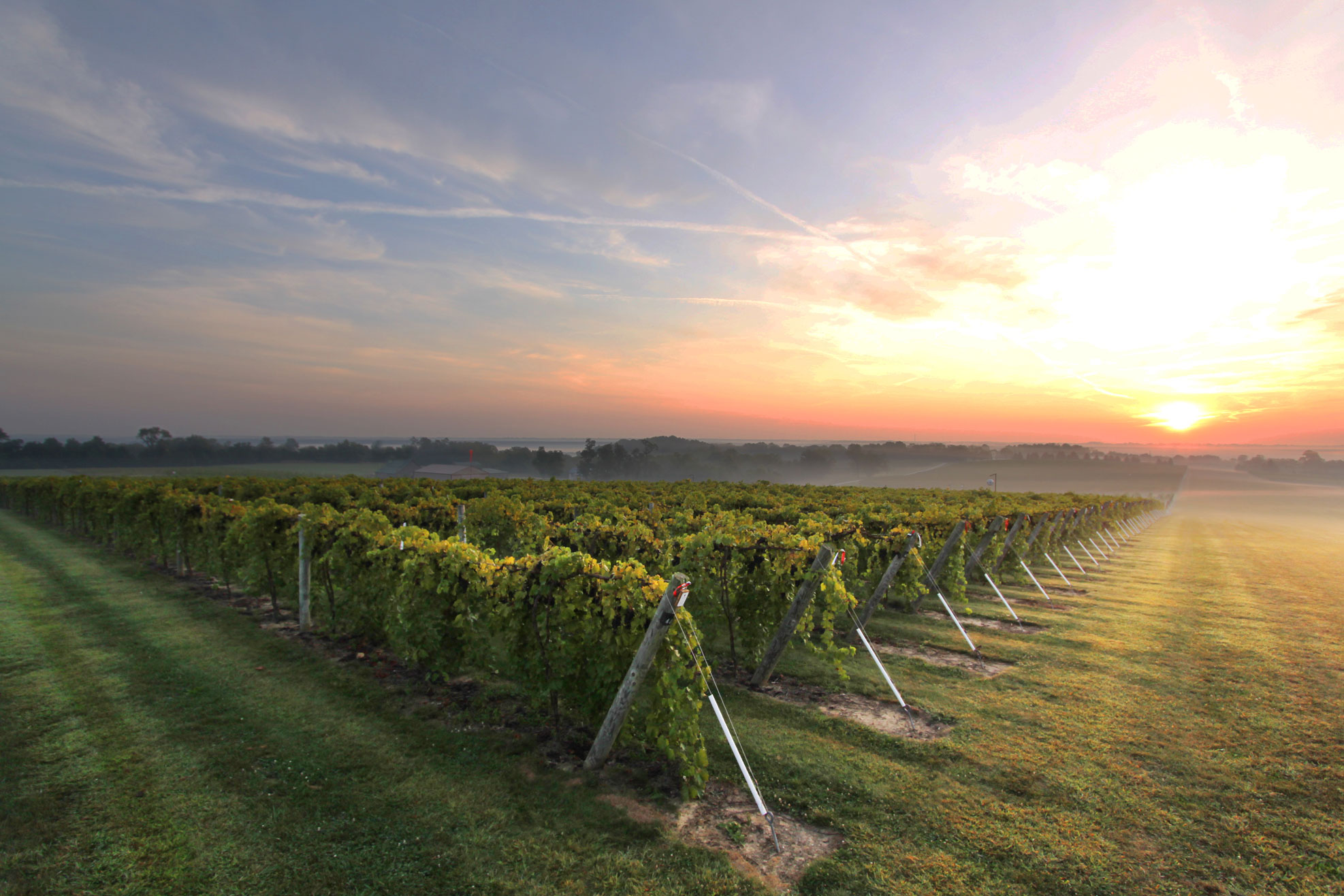 Fall is usually a busy time at the Oliver Winery, with harvesting and wine making in full swing, but this year has been especially interesting because warm temperatures and sunny days have elongated the harvest season into late October and early November.

Harvesters are picking Catawba grapes at the Creekbend Vineyard which will be processed into a rosé wine.

From Vine To Bottle

The story of Oliver Winery began in the 1960s with Indiana University law professor William Oliver. When his winemaking outgrew hobby status, he worked to pass The Indiana Small Winery Act in 1971. A year later, he opened his own winery. His son Bill Oliver took over in 1983.

The Creekbend Vineyard, located in south-central Indiana, Monroe County, opened in 1994. In addition to the Catawba grapes, they grow Vidal, Chambourcin and Cabernet Souvignon.

Driving up the gravel road of the vineyard, it's grapevines as far as the eye can see -- covering 54 acres of rolling hills.

Get Your Hands Dirty

Vineyard manager Bernie Parker and the six other regular workers are joined by an additional 60 harvesters who are paid $2.00 for every plastic lug they fill with grapes. The goal is to pick 16 tons of grapes before lunchtime.

The Catawba plant is hardy and can withstand hot and humid summers as well as very cold winters -- exactly the climate in Indiana. Parker says this is actually the latest they've ever picked the Catawba crop thanks to the unseasonably warm weather in October.

The Trouble With Grapes

The life cycle of the grapes start in April when the plants bud. The vines flower and grapes start growing in May and June. That's when Parker and his team do most of the canopy management and quality control. The grapes go through veraison, the on-set of ripening, and then they sweeten up in early August. The harvesting happens throughout the fall -- but of course, all of this is dependent on the weather.

"We are in a climactic zone that has the equivalent growing-degree days as Napa Valley," says Parker. Although, one thing Creekbend Vineyard has that Napa Valley doesn't is forty inches of rain some years compared to Napa Valley's four inches.

All that rain isn't necessarily a good thing. With it comes some serious problems for the plants, like various types of mildew. Because of this, Parker says this could never be an organic vineyard -- they simply must apply fungicides.

They also have to fight off grape-loving animals like robins. There is no surefire way to deter birds, but Scare Eye balloons, bird distress signals and a propane cannon help to keep them at bay.

Winter is right around the corner, but that doesn't mean that Parker and his staff get to take it easy.

Once harvest season is finally over, they will do a mechanical rough cut of all the vines. Then, each of the vines must be pruned by hand. Around 95 percent of this year's growth will be cut off, leaving behind only six inches of stem on the vines.

"We put hands on the plant anywhere between seven and tens times a year depending on how much rain we get," Parker says. "That's right around 34,000 plants. We're busy constantly."

More: Next the grapes are transported to the Oliver Winery wine making facility. Learn more about what comes next in the wine making process.