Nurturing A Dying Beehive Through Its Final Season 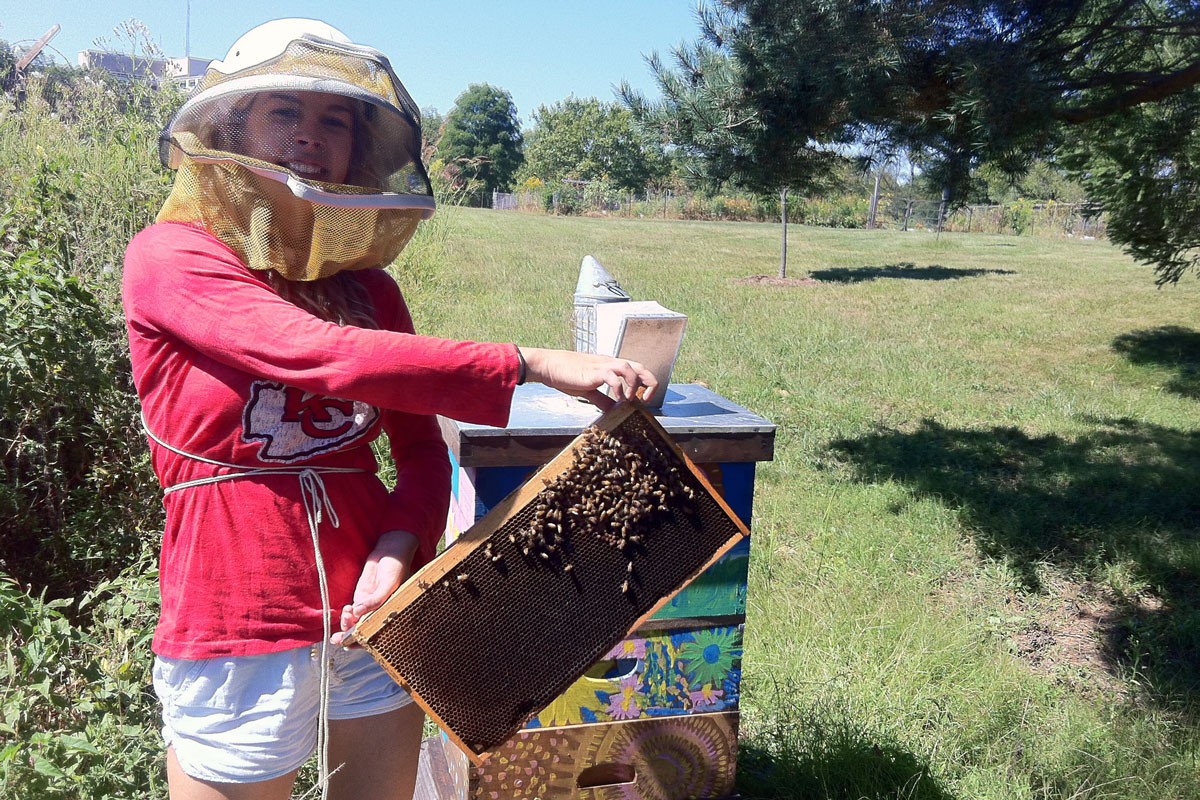 Ellie Symes hands me a beekeeper hat and mask. I struggle to fit it over my headphones. Then I wrap the string around my recording equipment and around my waist to secure the net. It's uncomfortable.

"Yeah, I'm so used to it by now," says Ellie, who also happens to be wearing shorts. She shrugs off the possibility of a bee sting. "You're technically not supposed to wear red either, but my Chiefs won last night."

One Sting At A Time

We're preparing to crack open the hives she helps manage at Indiana University's Hilltop Garden and Nature Center. She is the president of Indiana University's Beekeeping Club, but she doesn't consider herself an expert. She's only been working with bees for three years after all.

"I don't get intimidated by the bees anymore," she says. "Once you understand their behaviors, it's just like, ‘Oh, she's doing that now, so I'll do a little more smoke.'"

Yes, she has been stung before. She says each time was her fault, like when she nearly crushed a bee reinserting the frame. Or, when she didn't use smoke when opening the hive. "It just shot out right away and got me in the leg," she remembers. That was her first sting as a beekeeper. "I was actually really excited, probably the only person who gets excited by a sting. Like, I'm a real beekeeper now!"

Ellie is a graduate student at Indiana University, but her beekeeping began in Columbus, Ohio.

It was the summer after her freshman year. "I was getting bored with life-guarding and wanted to jazz it up, so I Googled environmental volunteering and founded beekeepers assistant needed, and I thought that looks weird, I'll try that." And she fell in love with it.

When she came back to school, she secured a research grant from the Hutton Honors College to establish the first hive at Hilltop in 2014. Since she was still a beginner, she connected with local beekeeping guru George Hegemen to learn the ropes.

More and more students expressed interest in bees, so Ellie helped form the IU Beekeeping Club. 40 students attended the group's second annual call-out meeting this past fall, and another 200 signed their contact list.

"We don't need to raise a generation of beekeepers that after college start beekeeping," she says. "We just want to raise a more knowledgeable generation that understands this issue."

Requiem For A Beehive

Beekeeping is a soap opera, I've learned. Honestly, I used to get really upset and get really emotional about it, but now it's just like, ‘Okay, well…'

She grabs and handful of brown pine needles and shoves them into the smoker. It's a windy day, so it takes several strikes of her lighter before the smoker ignites. Ellie says the proximity to the pine trees was one of the reasons they chose this spot. The bees use the sap to seal the hive, and keepers have a ready supply of burnable material.

A few good puffs from the smoker and the bees are stunned. She can now open the hive. She shrugs, "This hive's kind of struggling. They're not going to make it through winter." She points to the edge of the frame where there's only a small portion of honey; in a healthy hive, the entire frame would be covered. There aren't many eggs or bees inside this hive either.

But she's still dedicated to her weekly task of providing additional food for the bees. She holds a mason jar filled with sugar water. The lid has several small holes in it. She inverts the jar and places is over a slit in the hive. They need this during the cold months when there isn't much nectar to collect. But, Ellie's efforts can sometimes cause more harm than good. A couple weeks ago, she discovered a dozen bees had drowned in the water.

"Beekeeping is a soap opera, I've learned," she says."Honestly, I used to get really upset and get really emotional about it, but now it's just like, ‘Okay, well…'"

She adjusts the mason jar so it's positioned just right. And then, she crushes a bee. Ellie recoils.

Other bees hover around their wounded comrade. "See her wiggling the tail, the other bee," she points out. That's a sign it might sting, so she puffs the smoker.

Ellie lets out a deep sigh, "Okay, that was sad, I'm sorry," and she gently inserts the frame back into the hive.