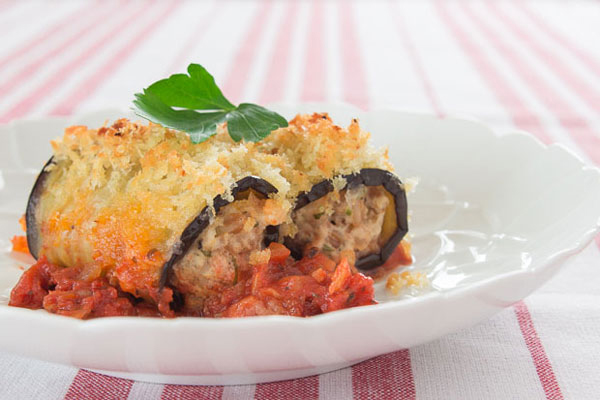 I recently made some beef and pork filled cabbage rolls. They were meaty and delicious, but my favorite part of the rolls was both the flavor and texture of the farro. This got me wondering about what a meatless roll stuffed with only farro would be like.

Because you’re losing out of texture, fat and flavor by omitting the meat, I decided to think about my rolls from the ground up. The farro was a good base for the filling since it has a meaty texture, but I wanted to include something that would give it some more body and richness.

That’s why I decided to add some raw cashew nuts. When pureed, cashews make a thick cream that has a faintly sweet taste that’s not unlike fresh ricotta. When mixed with the farro, you’ll end up with a filling that’s so creamy you’ll have a hard time believing there’s no butter or cheese in it.

Because the filling reminded me of some ricotta filled eggplant involtini I once had, I decided to change the wrapper from cabbage to eggplant. After roasting the eggplant with garlic and olive oil, I stuffed each sheet of velvety eggplant and topped them with garlicky bread crumbs. The rolls braise in a sweet tomato sauce until the flavors meld and the topping turns a golden brown.

I often see vegan recipes laced with hyperbole like “this is so good, even meat-eaters will love it” or “this is just as good as the version with meat”. But hearing such promises from someone who hasn’t eaten meat in years isn’t all that reassuring. As a card-carrying omnivore, I hope my words bear a little more weight when I tell you that these meatless involtini couldn’t possibly be made better by adding meat or dairy.

Unapologetically rich and creamy, these vegan involtini taste downright bad for you. But while the amount of olive oil needed to roast the eggplants isn’t going to qualify this as diet food, it’s certainly healthier than it tastes. With textures ranging from crispy to satiny, and a bevy of contrasting flavors to match, each bite is different from the one that preceded it, making these rolls as fun to eat as they are to look at.

Because this dish is a little involved I’m going to assume you know how to make a basic tomato sauce (or that you have a store-bought one in the pantry). If not, you can use the tomato sauce portion of my chicken parmesan recipe. While I love the toothsome texture of farro, if you need to make these gluten-free, just replace the farro with cooked brown rice, or quinoa and use gluten-free breadcrumbs.