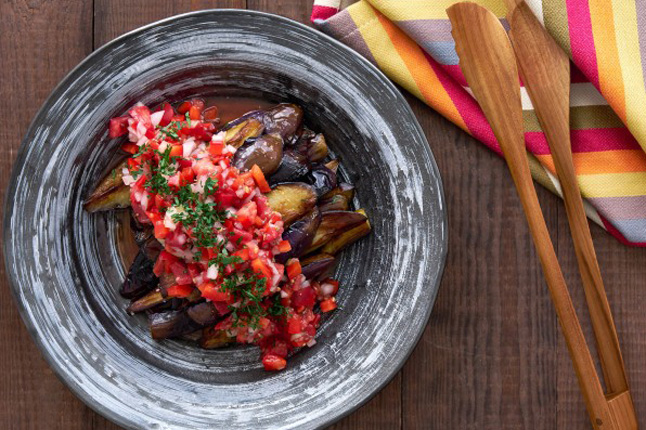 Eggplant is one of those controversial vegetables that people either love or hate. I think a large part of why it gets such a bad rap is that it's a fairly difficult vegetable to work with. Without the right technique it can end up tough, spongy and dry, or watery and flavorless, or just plain greasy. I've shared a few of my favorite eggplant dishes here before, like Baba Ghanoush and Eggplant Dengaku, but today I wanted to share a technique for making a salad inspired by Eggplant Caponata.

While I love a rich, flavorful traditional Caponata, it can be a bit of work, and isn't quite as light as I'd like during the warmer months of the year. This salad still includes loads of creamy pan-fried eggplant, but I've topped them with a fresh relish made of red bell peppers, sweet onions and tomato. Aside from providing a stunning juxtaposition of colors, the relish is crisp, sweet and sour which brings an enjoyable contrast in taste and texture to this dish.

To keep the relish for getting watery, I borrowed a technique I developed for my pico de gallo recipe and added a room temperature thickening agent, in this case, chia seeds. They provide just enough viscosity for the relish, and you don't even need to cook it.