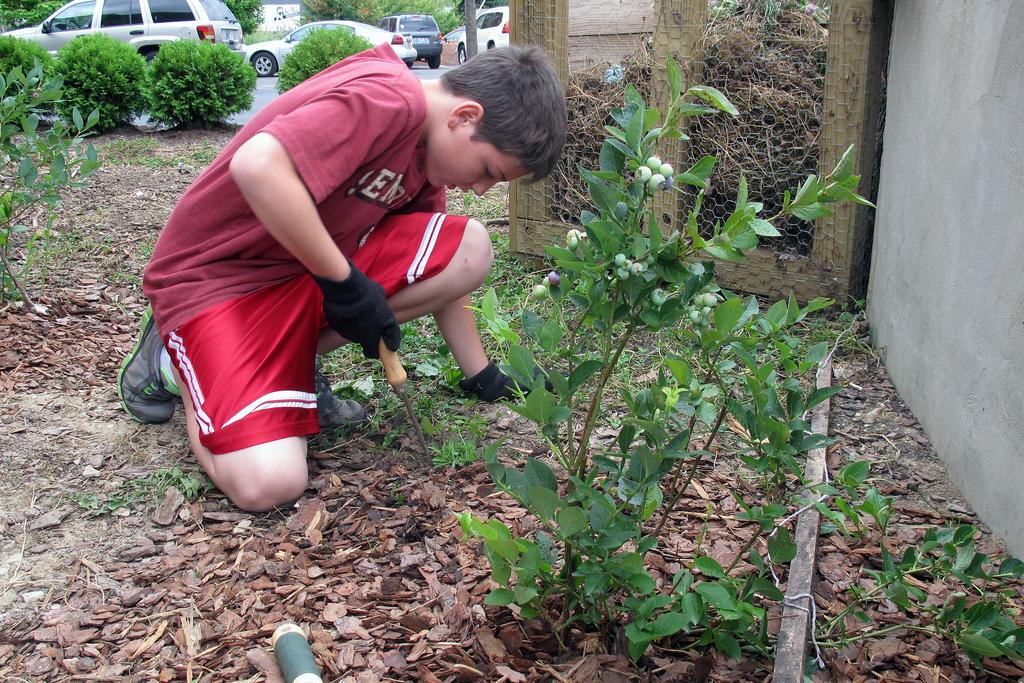 Earlier this week, we reported on the food growing on top of the Middle Way House, a not-for-profit domestic violence shelter in downtown Bloomington, Indiana.

Back on the ground, Aleisha Kropf from the Project School is getting ready to have a class of fourth graders join her for an hour of work in the garden. They will be weeding and fertilizing young blueberry bushes.

Through the support of two grants, students at the Project School are helping to turn the perimeter landscaping of Middle Way House into edibles that will eventually be sold to Food Works, a local catering company. Part of the educational experience is teaching kids where their food comes from, since Food Works provides lunches for the Project School.

The blueberry bushes were planted as part of the renovations to turn the old Coca-Cola building into the new location for the Middle Way House, but because of lack of volunteer power, the bushes became overgrown with weeds. That's where nine sets of eager and energetic 10-year-old hands come in.

"These kids have so much energy," says Kropf. "They jump on these blueberries. Weeds are flying, it's amazing."

Around the corner, zucchini blossoms are already flourishing in one of the two compost bins. The bins were built by middle schoolers as a physical education activity. And last week, Kropf supervised kindergarteners as they weeded another bed, laid sheet mulch and straw and planted seedlings they started in their classes.

She says since the school is located in an asphalt-locked space, teachers need to get creative when it comes to getting kids exercise.

"We have 300 students who need outside time, and we're interested in the science behind planting, sustainability and organics. You can bring these kids out here and it's like a living classroom."