Dietary Guidelines Crack Down On Sugar, Red Meat Gets A Pass 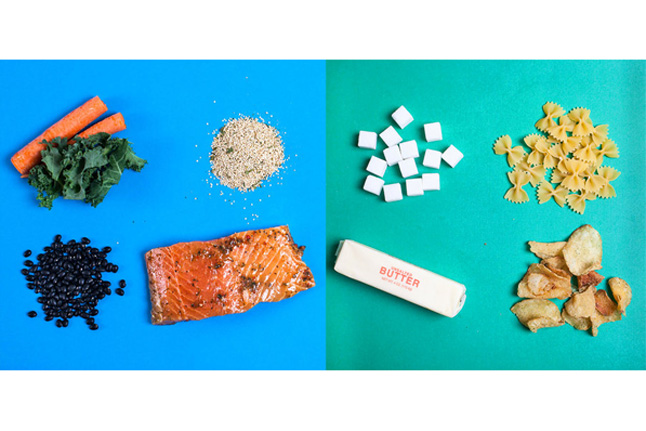 And today comes the official advice from the U.S. government: the Obama administration has released its much-anticipated update to the Dietary Guidelines.

The guidelines, which are revised every five years, are based on evolving nutrition science and serve as the government's official advice on what to eat.

One concrete change: Americans are being told to limit sugar to no more than 10 percent of daily calories.

As we've reported, lots of Americans consume up to 22 teaspoons a day. To meet the new 10 percent target, they'd need to cut their sugar intake by nearly half - to no more than 12 teaspoons a day on a 2,000 daily calorie diet.

Over the last five years, a growing body of evidence has linked high levels of sugar consumption to an increased risk of Type 2 diabetes and heart disease, even among Americans who are not overweight or obese.

Much of the dietary advice included in the new guidelines will sound very familiar and remains unchanged from 2010. For instance, there's a focus on consuming more fruits and vegetables, more fiber and whole grains, and less salt.

Top administration officials within the U.S. departments of Agriculture and Health and Human Services, who were tasked with writing the guidelines, decided not to include some of the recommendations made by a Dietary Guidelines advisory panel that reviewed the latest nutrition science.

The message to eat more seafood, legumes and other protein foods really does mean substitute those for red meat.Â So I think the message is more or less there, it's just not as clear.

For instance, the advisory committee had recommended including sustainability as a factor in making food choices. But administration officials nixed that idea.

The committee had also advised telling Americans to cut back on red and processed meats. But that recommendation sparked a vigorous challenge from the meat industry, and the final dietary guidelines do not include any specific advice to cut back on these sources of protein.

The recommendation "was certainly controversial," says Tom Brenna, a nutrition professor at Cornell University and member of the Dietary Guidelines Advisory Committee.

"The red and processed meat recommendation, I think, has morphed a bit into a different kind of message," Brenna tells us. "A little bit like turning a coin over, in a sense, where if you eat less red meat, one is eating more of other protein foods."

Instead, the guidelines emphasize a "shift towards other protein foods" - including more nuts and seeds and about 8 ounces of seafood per week, based on a 2,000-calorie-a-day diet.

The suggestion to limit meat intake comes in more subtle form. For instance, the guidelines point out that many teen boys and adult men consume more than the recommended 26 ounces a week of protein from animal sources, so they should "reduce overall intake of protein foods by decreasing intakes of meat, poultry, and eggs."

There's also an overall recommendation - unchanged from 2010 - to reduce saturated fat intake to less than 10 percent of daily diet, a shift that could, in practice, require limiting intake of red meat.

"The message to eat more seafood, legumes and other protein foods really does mean substitute those for red meat," Brenna says. "So I think the message is more or less there, it's just not as clear."

The other major change to the government's nutrition advice: dietary cholesterol. The new guidelines drop a longstanding recommendation to limit cholesterol from foods to 300 milligrams a day.

As Alice Lichtenstein, vice chairwoman of the the expert panel that advised the government on the guidelines, told us last February, there isn't strong evidence that limiting cholesterol-rich foods lowers the amount of artery-clogging LDL cholesterol that ends up in the blood.

The guidelines also call on Americans to cut back on sodium to no more than 2,300 milligrams per day. Most of us consume far more - about 3,440 milligrams daily on average - much of it in the form of foods like pizzas, soups, breads and cured meats.

The Dietary Guidelines have clear implications for federal nutrition policy, influencing everything from the national school lunch program to the advice you get at the doctor's office. But they are written for nutrition professionals, not the general public.

Indeed, one has to wonder whether most Americans are even listening. As the Dietary Guidelines report points out, three-fourths of Americans don't eat the recommended amount of fruits and vegetables. In some age groups (think teens), the percentage of people following the guidelines is in the single digits.