In A Dark Year For Agriculture, Pumpkins (Mostly) Glow 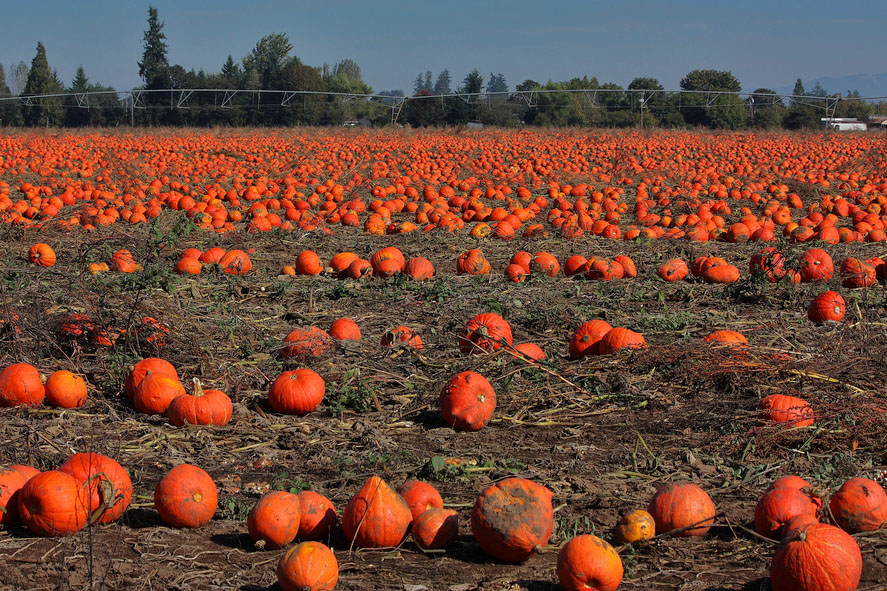 2012 has been a terrible year for corn, porkÂ and other foodsÂ thanks to the drought that struck much of the United States. But as we approach Halloween, trick-or-treaters will be glad to know that one crop has fared exceptionally well in many places: big, orange pumpkins.

They Love It Hot And Dry

Hot and dry weather decreases the mold and pests that harm pumpkin plants, causing them to thrive under the drought conditions that kill so many other plants.

"We had a very low disease rate because there wasn't that high moisture that diseases love," saysÂ Kathleen Delate, professor of agronomy and horticulture at Iowa State University.

Some areas, however, have seen so little rainfall that even a dry-weather-loving crop like pumpkins are suffering.

Pumpkin vines have a deep root system that enables them to survive with less water than other crops. But they still need water.

In Oklahoma, many pumpkin farmers have had to flesh out their own crops with imports from out-of-state to ensure they'll have enough to sell to farm visitors.

"The reality is we have had to ship pumpkins in for three years," says Diane Dickenson of Shepherd's Cross, a non-profit farm in Claremore, Oklahoma. "But this year's harvest was even smaller and this has been going on for many years."

How Dry Is Too Dry?

The difference, according to experts, is caused by the irregularity of the summer's rainfall.

One farm may have had its crop choked by lack of water, while another as few as twenty miles away may have had slightly more rainfall.

The happiest pumpkins this year were those who benefitted from irrigated fields.

So carve your jack-o-lanterns from locally-grown pumpkins if you can. Now, more than ever, those farmers can use your business!