The Dark Side Of Sunny-Side Up 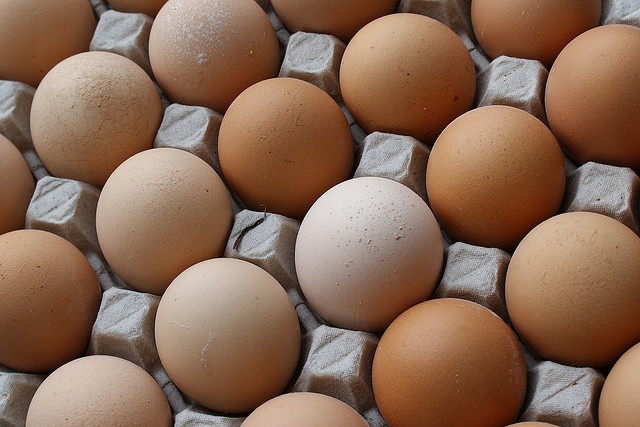 Lot Of Omelets, Lots Of Birds

According to a report issued by United Egg Producers in October, the average American consumed around 246 ovums last year.

Do a little number crunching with WolframAlpha, and you'll find this means the nation as a whole gobbled some 76.5 billion eggs in 2011 -- enough yolk and albumen to fill the world's largest supertanker five times over!

While the immaculate ellipsoids you find at the grocery store might look like the creations of some alien machine, it's important to remember that our eggs actually come from the U.S.'s 280 million living, breathing hens.

Of these 280 million egg-layers, the vast majority are housed in gigantic indoor facilities, where miserable conditions can take root in the absence of adequate governmental oversight.

An undercover video released today by The Humane Society offers a behind-the-scenes glimpse into conditions at a Kreider FarmsÂ egg factory.

The footage is disturbing: hens crammed into 54 to 58 square-inch cages, mummified carcasses strewn amongst the living, a thick layer of dead flies covering the floor, and the list goes on.

Suddenly that ketchup-slathered scramble's a little bit hard to swallow.

Kreider Farms spokesperson, Dave Andrews,Â insists the depiction is a distortionÂ and not representative of how the company treats its flock generally.

Out Of Sight, Out Of Mind

The Humane Society's exposÃ© comes on the heels of the passage of two new state laws that prohibit would-be whistle blowers from bringing recording equipment surreptitiously into factory farms located in Iowa and Utah.

Industry execs frame the controversial legislation in terms of 'criminal defamation', but opponents of so-called 'ag-gag' measures worry about what will happen to livestock should farming practices grow even more opaque.

What You Can Do

Even though it's impossible to know what's really going on in the egg supply chain as a whole, there are some things you can do to ensure your own eggs are cruelty-free.

The first (and easier) option is to get acquainted with someone in your community who raises hens in a manner consonant with your ideals and who would be willing to sell you a dozen eggs every couple of weeks or so. (Hint: ask around at your local farmers market.)

The second -- albeit more involved -- option is to do some research and get laying hens of your own. It's not as daunting an endeavor as you might think, and those deviled eggs are so much better when you know the chickens that laid them are fit and happy.