Dairy Farmers Milking For What It's Worth, Unsure What Comes Next 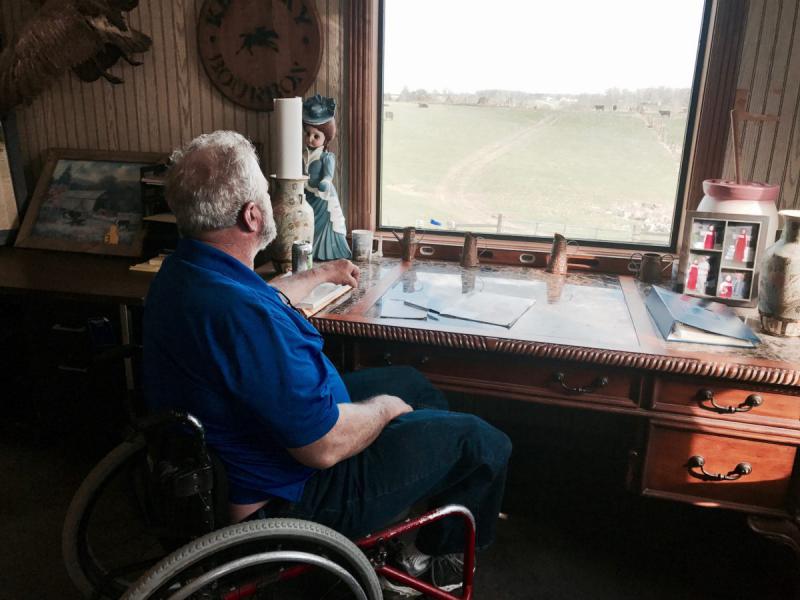 Dairy farmer Gary Rock sits in his milking parlor, overlooking what is left of his 95-cow operation in LaRue County, Kentucky.

"Three hundred years of history is something that a lot of people in our country cannot even talk about," Rock said. That's how long the farm has been in his family.

While the land has turned out tobacco, soybeans and other crops over the years, since 1980, dairy has nourished the family during good times and in tragedy.

"In 2013, we had an F-2 tornado that totally destroyed all the facilities here except the one we are sitting in, which is the milk parlor itself," Rock said. If that had been lost, he said, he would not have rebuilt.

Instead, things moved forward with help from his community.

"Before the tornado, we had a freestyle barn. It was low, it was not well-ventilated. After the tornado, we put in a pack barn, which eliminated 90 percent of the health problems I had with cattle."

Rock said the changes ended up helping his operation significantly. But within weeks of the farm's return to production, tragedy again: Rock lost his legs in a tractor accident. Still, the dairy provided, and this time with more than an income.

"It enabled me to find life again in a profession that I already knew," he said. "So, that was a driving force for me."

Now, the farm looks to weather its greatest storm yet: a disastrous drop in revenue.

"To give you an illustration, the same farm on the same number of cows is selling a $170,000 less of product in value," Rock explained. "So, try to comprehend having to cut your pay scale in half and see what you've got to do to survive."

This isn't a Rock family problem, this is a dairy industry problem. Prices have plummeted in a market flooded with supply from foreign producers and larger operations squeezing out small farmers. The crisis has dairy farmers rethinking the U.S. market system and looking to other countries as models for a solution.

In the Ohio Valley, the effects have been swift. In February, more than 100 producers across Kentucky, Ohio and five other states learned that major regional buyer Dean Foods would cancel contracts. Another processor, Illinois-based Prairie Farms, is closings its fluid-milk processing plant in western Kentucky in June.

"It looks to me that this will be the last month-and-a-half of milking that I'll do," Rock said. "This is the brick wall I never faced."

The average price of milk has about 30 percent below the cost of production since March, the National Family Farm Coalition said. Things are so bad that dairy producers who do have contracts report that co-ops are attaching suicide prevention information with their checks.

Farm Aid Communication Director Jennifer Fahy said the tough times remind her of the 1980s farm crisis, when as many as 2,100 farms would close in a week.

"We are hearing from farmers who are being referred by organizations that are usually referrals for us," she said. "Over the years since the farm crisis the network of support for farmers has been just chipped away."

Fahy explained that they've seen net farm income take a 50 percent drop and dairy is seeing it the most.

"Sometimes the best-case scenario is helping a farmer to navigate declaring bankruptcy and getting out before it's even worse, unfortunately," Fahy said.

The U.S. open market system is pushing milk production to larger farms. In 1987, half of all dairy cows were on farms with 80 or fewer cows, similar in size to Rock's operation. By 2012, that midpoint herd size was 900 cows.

Dykes claimed that some of Canada's products are being "dumped" at unfair prices due to Canada's system of price controls, known as "Class 7," implemented last year. He said it stems from an increased demand in butter. Instead of importing to meet their additional butter needs, Canada raised the milk quotas that Canadian farmers can produce.

"They increased it almost 6 percent, whereas the U.S. is increasing at about one-and-a-half percent per year," he said.

As Canada upped its quota for domestically produced milk to make more butter, it was left with an excess supply of other products, such as skim-milk powders, for which there was lower demand.

"Now you have the Canadians coming in, they are selling skim milk powders on the ground in Mexico at 3-cents-a-pound cheaper than we can from the U.S. to Mexico," Dykes said.

Dykes said the Canadian policy lowers prices on milk ingredients and encourages substitution of domestic Canadian dairy in place of products they might import from the U.S., which he said leads to "a situation where we have more milk right now than we have demand" - "and â€¦ trade becomes extremely important."

He wants Canada to open its market to more U.S. dairy. He'd like to see NAFTA renegotiated or for the U.S. to rejoin the Trans-Pacific Partnership, an agreement that allowed a small percentage of U.S. imports into Canada before President Donald Trump decided to end it.

In April, 68 members of Congress sent a letter to U.S. Trade Representative Ambassador Robert Lighthizer regarding NAFTA negotiations, urging an end to Canada's pricing program and dairy tariffs, which impose a duty of nearly 300 percent.

But the view from Canada is different. Dairy Farms of Ontario CEO Graham Lloyd said Canada's pricing schemes are targeted at the domestic market.

"The fear or concerns that the U.S. seem to have with Class 7 is that we are going to be competitive in the world market," Lloyd said. "But what needs to be understood is we actually don't issue milk production for export purposes."

Beyond just defending the Canadian system, Lloyd recommends that the U.S. should give it a try.

"From a Canadian perspective there is also a lot of sympathy for U.S. farmers," he said. Lloyd said Canadian farmers once had the same struggles U.S. dairy farmers face now, before the country moved to its quota-based system.

"Farmers didn't know where their markets were, they were having direct deals with processors," he said. "Milk was getting dumped, there were no production controls and farmers were going bankrupt because they had no certainty of any market."

Lloyd said that was all fixed by a supply management system based on three tiers: production control, pricing and import control. Now, prices are constant and stable allowing processors greater predictability, albeit at lower margins.

"That allows for greater planning for (farmers) and that's where you can maintain higher returns," Lloyd said.

The idea is appealing to some farm advocates in the U.S., who argue that emulating the Canadians holds more promise than blaming them.

"Dismantling a system that is working in Canada so that they are more available to soak up our excess product ... would not fix what is wrong here," said Patty Lovera, policy director for the left-leaning advocacy group Food & Water Watch, which has worked to protect smaller farms.

Food & Water Watch warns that the small to midsize operations are being "squeezed out by the consolidation of industrial mega-dairies that now dominate milk production."

"It would take other farmers who are doing well down to where farmers are here," she said. "Which is what we get a lot of in our trade negotiations."

In April, a group of small farm advocates sent a letter of their own to congressional leaders and Agriculture Secretary Sonny Perdue. In it, the National Family Farm Coalition, along with more than 50 family-farm, labor and consumer organizations urged immediate action on the dairy crisis by adopting a system like Canada's.

Wisconsin organic dairy farmer Jim Goodman heads the National Family Farm Coalition and believes the supply management system, which Canada has had for 50 years, will work in the U.S.

"Because the government doesn't run it," Goodman said. "They don't have to be worried about providing subsidies for producers when prices get low because of all we're supplied because that doesn't happen."