To Cut Food Waste, Expiration Labels Get An Update 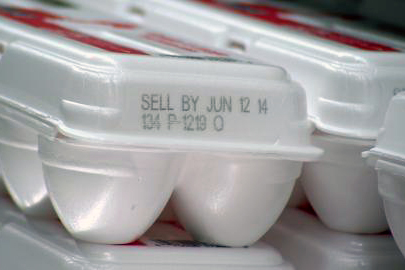 It's a classic conundrum that comes up every time you're cleaning out the fridge: the package label says the food is past its prime, but it's not moldy or smelly.

Do you give it a chance or toss it in the trash?

For a great number of consumers it's the latter, but now some of the largest food retail trade groups are hoping to settle the score and clear up the confusion in hopes of keeping more food in bellies, rather than sending heaps of food to landfills.

The Food Marketing Institute and the Grocery Manufacturer's Association, two of the food industry's largest trade groups, issued new recommendations to retailers and food-makers to modernize their labeling systems and narrow their label language to just two phrases: “Best if used by” to tell consumers that the food is still ok to eat after the date, but freshness matters so eat it quickly; and “Use by” to tell shoppers that the food has a shelf-life and should be eaten before the date on the package.

The recommendations by the trade groups are voluntary, but many expect the measures to work their way deep into the food system.

Contrary to popular belief, most food labels today don't tell you anything about the safety of the food you're eating. Due to a lack of federal standards, a bevy of food expiry labels have cropped up over the years, each manufacturer using different language to tell consumers their product is freshest before a certain date. On a trip to the grocery store, consumers will see everything from “Expires on” labels on eggs, to “Sell by” labels on peanut butter. Some counts put the number of different date labels at a dozen or more.

Food waste has become a signature issue for some environmental groups who see the issue as a way to tackle both hunger and climate change in one fell swoop.

About 30 percent of the nation's food supply is wasted or lost by both retailers and consumers every year, according to the U.S. Department of Agriculture. In a bid to cut down grocery store confusion, the Natural Resources Defense Council (NRDC) lobbied the grocery trade groups to create the new, voluntary standards, and send them out to their members.

You could start seeing more standardized food labels by summer 2018, the soft deadline trade groups told members to aim for in adopting the new language.

Consumer studies show that more than 80 percent of Americans don't fully understand date labels on food, and end up throwing food away prematurely, even if it's not visibly spoiled, according to the NRDC.

The NRDC estimates consumers throws away $218 billion worth of food each year. That figure comes from the organization's landmark 2012 food waste study, which charted where in the food chain it gets wasted. Applied across the country, food waste costs the average American family of four about $1,500 each year, the group says.

Food waste activists are quick to say that food labels won't solely solve the problem, but could be a key in cutting down waste at home, one of the most significant sources, and one of the last lines of defense before sending waste to the landfill.