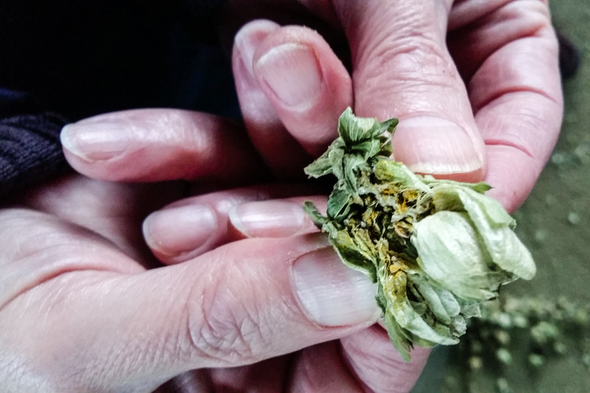 Only the oldest residents of Villanueva del Carrizo, a town on the fertile banks of the Ã“rbigo River in northern Spain, remember that day just after World War II, when all the area farmers were called to a meeting in the center of town.

Spain's tiny beer industry was in a bind: It could no longer import hops â€“ a key ingredient in beer â€“ from war-devastated Germany. But brewers had spotted wild hops along the Ã“rbigo River, and they had a hunch it could grow on farms too.

"Nobody knew what it was, this plant with flowers," says Bernardo Llamas, who was eight years old at the time. His father was one of the first to switch his wheat fields to hops.

Fifteen or 20 times more profitable, local farmers say, than growing wheat or corn. Those here who took a chance on hops got rich â€“ and Spain's fledgling beer industry was saved.

Fast forward 66 years, and the craft beer craze has sent demand for Spanish hops through the roof.

Spain is one of the world's biggest wine producers. And for centuries, there were only a few brands of beer produced in the country â€“ mostly lager. But the recent boom in craft beer â€“ with 150 new brands, and counting, in the past decade â€“ has been good news to the town of Villanueva del Carrizo ('Carrizo' for short), which grows 99 percent of Spain's homegrown hops.

There's still only one production factory, a local cooperative, which handles all of the region's hops â€“ about a million kilos a year.

"This factory was founded in 1945," says Ignacio NicolÃ¡s Campillo, the facility's director. "Our area of Spain has plenty of water and low humidity. It's the perfect climate for hops."

Campillo took The Salt on a tour of huge machines that dry the hops and separate the hop flowers, revealing yellow powder that's compressed into the pellets which are dissolved into beer. The hops add the sharp sour flavor in most beer.

But the Carrizo factory can't make those pellets fast enough to meet the demands of a growing industry. Craft beer production jumped 33-percent in Spain last year. In an ironic twist, an international hops firm first founded in Germany, called Hopsteiner, recently bought a controlling stake in the local factory, hoping to boost production, with ten more varieties of hops.

In the meantime, Spanish brewers have had to supplement with many millions of kilos of hops imported from countries like the Czech Republic and Germany, to meet growing demands. Some of that demand is from the Kadabra Brewery, located near Spain's hops fields. The brewery opened two years ago, founded by a group of friends from Carrizo.

"I grew up in these hops fields, and there was never a local brewery nearby," says co-founder JosÃ© MarÃ­a Vazquez. "So one night over beers, my co-founders and I decided to make our hobby into our profession."

Kadabra is the first Spanish brewery to use all local ingredients, with hops from fields that abut Vazquez's backyard.

"It was the moment to do it. Craft beer is so in style right now," he says. "Spain is in a craft beer boom."

The labels on Kadabra beer are all in English. The idea is to deliver an American-style hoppy craft beer.

Back outside in the hop fields, elderly farmers use long bamboo rods to pick hops that grow more than 20 feet high, strung up on pylons. It's grueling work that few farmers are still willing to do.

"It's easier to drink beer than to grow its ingredients," says farmer Bernardo Llamas, laughing.

As Llamas and his neighbor, fellow hops farmer Benito Paz Fernandez, work in their fields, they bemoan the lack of young people left in the Spanish countryside. Youngsters these days have no interest in farming, Paz Fernandez says.

"It used to be all hops growers here. But now, all the younger people have left for university or jobs in the city," Paz Fernandez says. "So we're all that's left - a bunch of aging hops farmers!"

So the farmers of Carrizo are scouting for a new generation of farmers, willing to take a chance on growing hops, like they did - and help feed this fast-growing industry.