If It's Not From A Cow, Can You Legally Call It Milk? 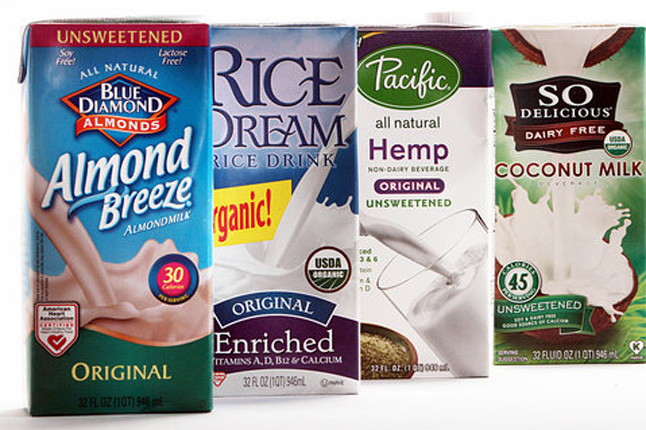 Beth Briczinski has been keeping a list of all the things that companies are turning into products labeled as a kind of milk. "There's soy and almond and rice," she says. "Hemp, pistachio, macadamia nut, sunflower."

Briczinski is highly annoyed by these products. She's vice president for dairy foods and nutrition at the National Milk Producers Federation, which represents the original milk producers: dairy farmers.

These other "milk" products, she says, are confusing consumers. She recalls a recent conversation in which one of her friends, who's trained as a food scientist, thought that a plant-based product can be called milk "because it has the same nutrients" as milk.

This is exactly what those companies want you to think, Briczinski says. It's why they label their products "milk" and place them in the dairy aisle at the supermarket. But the products are not the same at all. Some milk-like drinks contain very little protein or calcium.

This week, a group of 32 members of Congress, many of them from big milk-producing states, came to Briczinski's aid. They wrote a letter to the Food and Drug Administration, calling on the FDA to order manufacturers of plant-based drinks to find some other name. Congressman Peter Welch (D-Vermont), a co-author of the letter, points out that the FDA already has a legal definition of milk, and "the FDA regulation defines milk as something that comes from a mammary gland. So we're asking the FDA basically to enforce its own regulation."

Nancy Chapman, executive director of the Soyfoods Association of North America, responds to this with a question. "If you break open a coconut, what's inside? Coconut milk!"

Chapman says this word "milk," in practice, has a very broad meaning. "It's just a liquid that is taken from a particular protein source - a coconut, a soy[bean], a cow, a goat, a whatever!"

This week's letter is only the latest round in a long-running battle over the milk label. In 2000, the National Milk Producers Federation filed a formal complaint with the FDA, asking the agency to crack down on the the labeling of plant-based drinks as "milk." Three years earlier, in 1997, the Soyfoods Association of America had asked the FDA to recognize that "soymilk" is the common and accepted name for a product derived from soybeans and water.

So far, the agency has declined to take a stand, and there's little sign that this week's letter from Capitol Hill will change things. An FDA spokesperson told The Salt in an email that the agency "plans to respond directly to the lawmakers on their letter."