How Much Does It Cost To Eat Healthy? 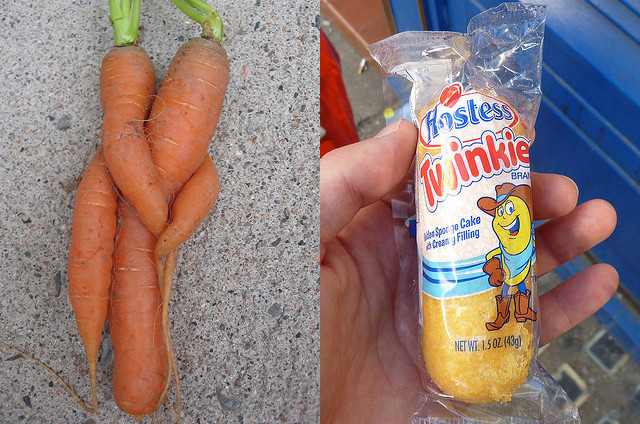 According to Andrea Carlson, lead author for the study, the key is which units researchers decide to employ in their calculations.

In the past, determining the cost-effectiveness of a given food item has involved dividing its price by the amount of calories it contains. If a Snickers bar costs a dollar, for example, then each of its 250 calories is worth less than half a cent.

As it turns out, when considered in terms of price per calorie, junk food is almost always more economical than more wholesome options.

In the most recent study, however, price per gram and the price per portion replaced price per calorie. Under this mathematical regime, healthy foods often compare favorably to unhealthy alternatives

Three o'clock rolls around and it's time for your afternoon snack. You have two choices: a Twinkie or a carrot.

A single Twinkie gives you 150 caloriesÂ and, let's be honest, if you've got a box handy, you're probably going to go back for seconds.

A large carrot, on the other hand, is only 72 calories, but you'll probably feel full enough to stop eating after just one.

Eat This, Not That

To qualify as "healthy," foods had to contain ingredients from at least one of the USDA-recognized food groups (fruits, vegetables, grains, proteins, dairy) and contain limited amounts of sodium, added sugar and saturated fat.

Unhealthy foods, on the other hand, were those that contained little or nothing from any of the food groups and/or were high in sodium, sugar and/or saturated fat.