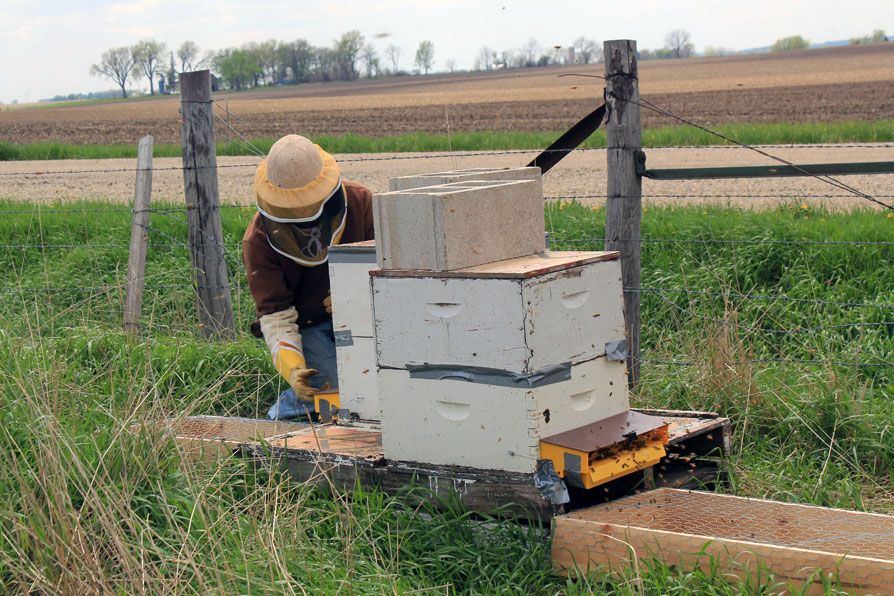 Nathan Anderson stops his red pick-up truck alongside a cornfield on his farm near Cherokee, Iowa. The young farmer pulls on a heavy brown hoodie, thick, long, sturdy gloves and a beekeeper's hat with a screened veil. He approaches a pair of hives sitting on the edge of a field recently planted with corn and adjusts a yellow plastic flap that traps some of the pollen the bees bring back to their hive.

Anderson is not a beekeeper. But he's agreed to help researchers study bees on cropland because honeybee colonies have been dying off at alarming rates in recent years. Some people are wondering if part of the problem in the Midwest is the vast seas of corn and soybeans. And researchers at Iowa State want to find out.

Specifically, Iowa State University researcher Mary Harris wants to determine whether neonicotinoids-a class of insecticides found in the coatings on most corn and soybean seeds-are responsible for the fragility of some hives. Harris says when corn is planted, dust vented from high-tech planters may include residue from the seed coating. Harris has found that the pollen bees collect during planting can contain some of the toxins.

"The highest concentrations were detected in the pollen that was collected the week of planting," she said, and then the levels decrease.

"They're not as able to carry out the various functions that are going to set the hive up to have a really healthy, successful season," she said. That may contribute to higher over-winter losses.

Coated seeds are easy for farmers to use and, Harris said, they can be an important part of an integrated pest management system. Some home gardening products also contain neonicotinoids.

"Some of the aspects that make these such good chemicals may also be creating some environmental problems," Harris said.

The bee situation is dire. Over the past eight years, nearly a third of all bees nationwide died annually. Beekeepers say some losses are routine, but the recent levels are jeopardizing the entire population.

The seed treatments that Harris is studying are ubiquitous. Nearly all corn seed sold in the U.S. has an insecticide treatment. And many seed dealers say that most of their customers request soybean seeds with the treatment applied. Farmers have used insecticides on their crops for decades, so many farmers are skeptical that these seed coatings are now killing bees.

Without bees the cost of our food would go up dramatically. We wouldn't starve to death, without bees," Toth said, "but we would have a lot less variety in our diet.

While research is ongoing, and many factors are likely contributing to bee colony losses, the European Union has put a two-year ban on certain neonicotinoids. And DuPont Pioneer is selling corn and soybean seedsÂ without the toxins in Canada â€“ they're not available in the U.S.

"The corn dust could be having an impact on hives in some situations," Toth said. "It's not explaining the whole collapse of the beekeeping industry."

Figuring out the combination of factors that's killing bees, Toth says, is important to preserving the way we all eat. Corn and soybean crops don't rely on bees and other pollinators. But most fruits, nuts and vegetables do.

"Without bees the cost of our food would go up dramatically. We wouldn't starve to death, without bees," Toth said, "but we would have a lot less variety in our diet."

There is some good news for pollinators. USDA has made $3 million available to help farmersÂ create bee habitat on conservation land in five Midwestern states. Cover crops, which have been re-gaining popularity for a variety reasons in the Corn Belt, can provide quality food for pollinators. And bee deaths this past winter were lower than they have been in years-but not yet low enough to reverse the trend.

"There's not going to be a single silver bullet that's going to fix everything," Toth said. "I wish there was."