Cooking With Kudzu: Experimental Permaculture Collective “Eats The Vine That Ate The South” 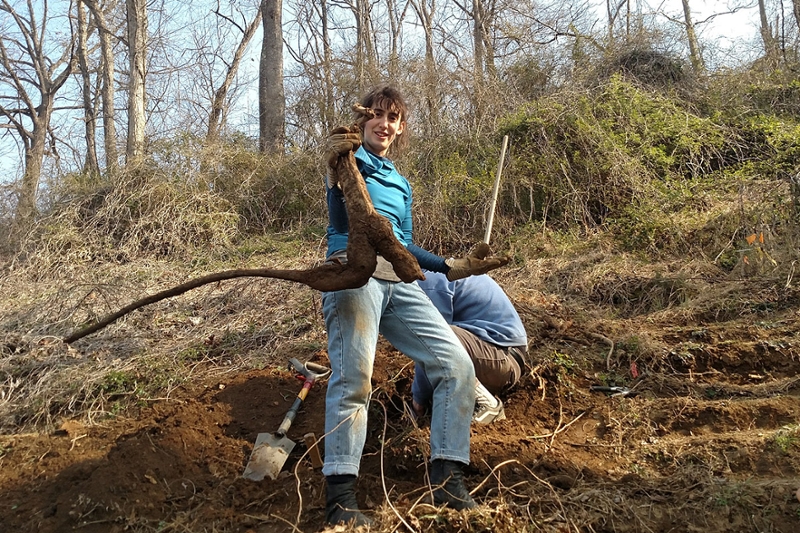 Kudzu, the east Asian vine, was introduced to the U.S. as an ornamental and erosion control plant in the late 1800s. But now it’s considered one of most prolific and damaging invasive plant species in the U.S. The so-called vine that ate the south can grow a foot a day, covering whole trees, fields, and telephone poles. It’s beginning to expand to landscapes as far-flung as Illinois, New Jersey, and Oregon. Kudzu is the target of huge numbers of eradication projects, but despite this, many Southerners are captivated by the plant’s power. It’s inspired folk songs, poems, and books, as well as advocates. One of those advocates is Justin Hilt, an ecology educator and permaculturist in Asheville, NC. He says that kudzu was one of the first plants that really captured his imagination, likening it to a “big green monster.”


With Zev Friedman and Lauren Baccus, Holt runs the collective Kudzu Culture, which aims to raise awareness about the many uses of kudzu. Kudzu is used as a fertilizer for soil and fodder for livestock and can also be processed to make foods, fibers, and herbal medicines. Holt says that kudzu is a staple of cultures and industries where people have developed a relationship with the plant, and that he believes that the same can be true in the parts of the U.S. that see kudzu as a scourge. “I think that there's a whole lot of possibility for attitudes to shift around kudzu pretty quickly, if we can figure out economical ways to integrate it into farm and home economies,” he said.


It’s a challenge that is central to permaculture - how do we co-evolve with our environment, and find solutions to what we see as problems? Studies have shown that kudzu thrives with rising temperatures, so with a changing climate, the vine will not be going away any time soon.


Kudzu Culture runs regular camps for those interested in the plant. Depending on the season, they dig the roots, harvest the vines, and then process the kudzu, mostly using traditional Japanese methods. They are beginning to track their workflows and write grant applications that would allow them to develop new systems for processing and distributing kudzu on a larger scale At a recent Research and Development camp, they experimented with using a food-grade cement mixer to clean off the roots, and a chipper shredder to process chunks of root into mash. Next, the mash went in pillowcases and into the wash. The water that comes out after two wash cycles is a sort of cold extract tea, one that Kudzu Culture has sold to local kombucha companies as an ingredient. But it can also be settled and then refined to make a chalky white cooking starch.


With the cooking starch, one can make food and drink like golden milk, silky tofu, or mochi ice cream. The leaves are edible, and similar in taste to pea shoots. And one of the few traditional uses in the South is using the vine flowers to make jelly. The Kudzu Culture trio source recipe ideas from all kinds of places - old Southern recipe books, kudzu instagram hashtags, and East Asian cooking blogs they run through Google Translate.


Despite kudzu’s reputation and negative qualities, Holt and his colleagues think its possibilities can be leveraged, and the plant can be truly integrated into our current industries and practices. Rather than simply a project of “some crazy permaculturists who think it's a cool thing to do,” as Holt said, he hopes Kudzu Culture can create new pathways for a resilient and sustainable source of sustenance.