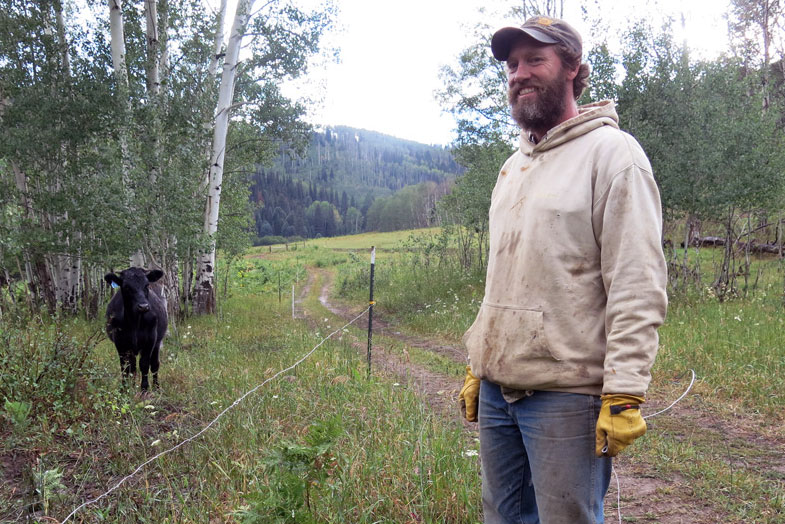 Local food is no longer just a novelty. Farmers markets are growing nationwide and farms that sell directly to consumers brought in $1.3 billion in 2012, up eight percent from just five years earlier. Despite the demand, making local food work in some places is decidedly more difficult than others. Steamboat Springs, Colo., is one of those places.

Problem number one is infrastructure.

The Yampa River Valley in Colorado is known for its meat. You can find a slice of that rich ranching heritage at Josh Kilbane's Yampa Valley Farms about 20 miles outside Steamboat Springs. You hear lots of moo-ing and oinking at the ranch. His herd of Scottish highland cattle, the kind with long, shaggy bangs and curved horns, munch on tall, green grasses behind an electric fence.

The one thing you won't hear much of anymore is the clucks of chickens. He has a few egg-laying hens left, but he liquidated his flock in 2013.

“What spawned it was the idea of creating really, really healthy good chicken,” Kilbane said.

Kilbane bought thousands of chickens and processing equipment, and explored whether local restaurants would buy local chicken for a premium price.

The demand was there. But after crunching the numbers, and losing a bunch of birds to the elements, the project was scrapped.

“It would cost somewhere between $250,000 to $350,000 to build a plant to process birds to the specifications of the federal government,” Kilbane said. “And that pushes us out as a small farm right off the bat.”

There's really no other place in Northwest Colorado where a small, local farmer could drop off chickens for processing.

There are places to take cattle, hogs and lambs, but no chickens. It's a familiar story all over the Midwest: there are huge chicken processing plants but you can't get in there if you're not contracted with a company. That left Kilbane unable to process whole birds into restaurant-friendly cuts and unable to find the capital for his own facility.

“Our challenge in Colorado and particularly in the Steamboat area is that our growing season is about 59 days from frost to frost,” said Karen Massey, Colorado State University extension agent for Routt County. “And so it is a real challenge for people growing their own food or growing food commercially for sale in restaurants.”

That number, 59 days, is something you hear oft-repeated in Steamboat Springs. It's even on the cover of a gardening guide the extension office hands out. The shortened season is a big reason why the city's farmers market feels more like a flea market, Massey said.

“There have been very creative businesses started with season extenders,” Massey said. “But it's a long haul. We sometimes get 400 inches of snow [in a year].”

Season extenders, like greenhouses and hoop houses can be expensive and tough to maintain. If they get too big they can bring up another impediment to local food production.

Steamboat Springs, like many cities and towns with local foodies, functions under a master plan that discourages sprawl into the open space that surrounds the town. Most plans attempt to preserve some kind of the town's ruralness, and Steamboat's is no exception.

Goldich's office has started passing along worksheets created by a county advisory committee to aspiring local food growers as a bit of a reality check about the uphill battle they can face. There are lots of permits to file and specifications to meet in order to get a business off the ground.

Even with all the roadblocks, Routt County planning director Chad Phillips says it's not stopping all prospective farmers.

“What we're seeing is some of the newer people to the county or just with a different perspective, that they want to make this work,” Phillips said. “And they're not doing it because it's easy money. They're doing it because their hearts are into it.”

That passion can be clearly seen by the success of a lively online bartering community of residents. If your garden produces a surplus of lettuce, for example, you can sell it to your neighbor on the side. More than a handful of people in town have taken advantage of the state's cottage food law that allows cooks to sell foods prepared in the home.

Josh Kilbane of Yampa Valley Farms says yes, the climate in Steamboat can be harsh, but that's no reason to throw your hands in the air and give up. When ten feet of snow drops on the ranch, his shaggy Scottish cattle and wooly, dreadlocked hogs barely realize it.

“I'm not going to stop it from being 40 below and 60 mile an hour wind storms, but I can match that animal to that storm,” Kilbane said.

It's that kind of adaptation farmers across the Midwest have been doing for more than century, Kilbane said. It'll be matter of adapting even further to meet the demand of a new market that increasingly wants local food.