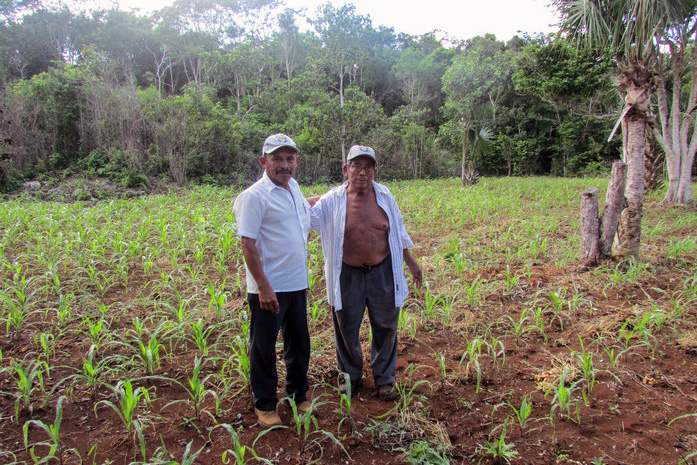 Dionisio Yam Moo stands about four-and-a-half-feet tall, and his skin is weathered from years in the tropical sun. A "proudly Mayan" farmer, he grows corn, beans and vegetables on a six-hectare farm in Mexico's YucatÃ¡n peninsula. The farm is surrounded by dense tropical forest, and crops grow amid fruit trees in thin soil, with the peninsula's limestone bedrock protruding in places.

Yam Moo farms using a traditional, rainfed practice called milpa, which has long involved cutting and burning patches of forest, planting crops for a few years, then letting the worn-out land regenerate for up to 30 years, before cultivating it again. Milpa has enabled generations of farmers like Yam Moo overcome the YucatÃ¡n's poor, thin soil and grow a stunningly diverse set of crops - multiple varieties of beans, squash, chili peppers, leafy greens, root vegetables, spices and corn, the plant at the heart of Mayan identity.

In recent years, however, Yam Moo and other YucatÃ¡n milperos have struggled to keep their farms alive. Climate change has brought erratic rainfall, making the growing season less predictable. Yam Moo says he has always planted his corn in May. But in 2015 for example, he says the rains didn't come until August. And then it flooded. He lost most of his crop, he says. Because milpa farming depends entirely on rainfall, which is never fully predictable, "there has always been a level of uncertainty, and the Maya have dealt with that for millennia," says JosÃ© MartÃ­nez Reyes, an anthropologist at the University of Massachusetts Boston. "But with climate change, I think that uncertainty has grown exponentially."

Years of unpredictable rainfall and failed crops pushed Yam Moo to find a solution, and it's onethat could in turn help fight climate change. Along with other farmers in the area, he developed a modified milpa called "milpa maya mejorada" or "improved Mayan milpa." Yam Moo no longer cuts down new forests, but he still grows the same diversity of crops. And he has incorporated into the ancient practice a host of modern techniques that help him farm despite the more unpredictable rains. A recently installed irrigation system, which relies on an above-ground rain water collector (the YucatÃ¡n has almost no surface water) ensures that Yam Moo can survive droughts. And he has found that by tilling in compost, chicken manure and other organic additions, he can grow far more crops per hectare. The added nutrients keep the soil healthy and productive, meaning he doesn't need to clear new ground as often, or perhaps at all.

In2015, after the rains ended in late summer, he replanted corn in a nearby field, arranging seeds in tight rows with the aid of a small garden tiller, and added organic fertilizers to boost yields. Later that year, he planted beans and vegetables. "As long as you keep feeding the soil, the soil will feed you," he says.

Today, he's back on his feet, feeding his family with what he grows on his plot. He hopes that his success can be a model for the more than 70,000 YucatÃ¡n milperos who, like him, are facing the punishing effects of climatic changes.

Yam Moo's efforts have gotten some high-profile attention. As part of a project funded by the U.S. Agency for International Development and private donors, the environmental group Nature Conservancy (TNC) is providing technical and financial support to get more farmers to adopt improved milpa. By helping farmers like Yam Moo adapt to the changing climate, TNC hopes to fight climate change, by reducing the deforestation traditionally involved in milpa: the practice is estimated to cause up to 16 percent of the deforestation on the peninsula. At a larger scale, the project aims to help Mexico receive payments from private companies and governments of developed countries to combat climate change.

"We're addressing drivers of deforestation with cutting-edge, science-based practices that are good for the producer, that are good for the ecosystem, and that mitigate climate change risks,"says Mariana VÃ©lez Laris, a local coordinator for TNC. The organic fertilizers and reduced burning help soil microbes thrive, she says, while sparing forests and the many species that thrive in them.

The improved milpa project is still small, with only twenty-five milperos in the area participating. But the staff at TNC has big hopes for it â€“ they see it as a key tool to reforest much of the YucatÃ¡n peninsula. As milperos transition away from slash-and-burn practices, TNC hopes that forests can now regrow and soak up carbon dioxide from the atmosphere.

As it is, milpa had been on the decline for decades, even before the effects of climate change hit farmers hard. The expansion of cattle ranching and large-scale mechanized agriculture, the YucatÃ¡n's two largest sources of deforestation, has dramatically reducedland available for milpa. Moreover, younger generation of Mexicans have opted for other professions, laments Silvia Teran, an anthropologist at the Gran Museo del Mundo Maya (Museum of the Mayan World) in MerÃ­da. Many go to work in the tourist resorts of Cancun and Tulum, or the kitchens of San Francisco and Dallas. "There is almost no connection now between young people and the milpa," she says.

Despite these challenges, milpa has been witnessing a revival in recent years, as tourists and Mexican consumers have started to seek organic, locally grown alternatives to industrial food, says Teran. In the town of Oxkutzcab, milperos sell attractively packaged pepitas, or squash seeds. Others use milpa primarily to feed their families, but sell honey made by the bees that fertilize the crops. A nascent "back to the land"-type movement has begun drawing young people from the city into milpa farming. The tradition's merits have even been lauded by celebrities like Mark Bittman, and are now being embraced by Mexican state and federal governments that once discouraged the practice.

But the revival remains precarious. Farmer Gualberto Casanova says milperos lack money to invest in improved milpa. Historically, milpa required little capital and equipment - just a machete or ax to fell trees, and a hoe to loosen the soil for planting. Improved milpa, by contrast, requires fertilizers, garden tillersand irrigation supplies, which most milperos, who are poor, subsistence farmers, can't afford. "If we had water, we could produce all year round," Casanova says. While the Mexican government has provided modest subsidies, the climate-change payments that Yam Moo, Casanova and other milperos hope to receivehave yet to materialize.

Whatever hopes organizations like TNC might have, improved milpa is not a "magic bullet," cautions anthropologist Reyes. He says commercialization schemes promoted by outside groups can backfire, either because the market they are supposed to supply doesn't exist, or because they create too much competition among producers, undercutting the prices of their goods.

For farmers who use milpa primarily for subsistence, however, milpa maya mejorada "might be the way to go," he says. "I see it as a positive initiative."

For Yam Moo, the proof was in his hand as he harvested his crops this past October, which will provide a large fraction of the food his family, which includes his children and grandchildren, needs for the coming year. He hopes his success can convince fellow milperos to take a chance on investing in in this modernized milpa, and in the process, spare valuable forests. "If this patch is enough for me and my family," he says, "why would I go cut down more?"