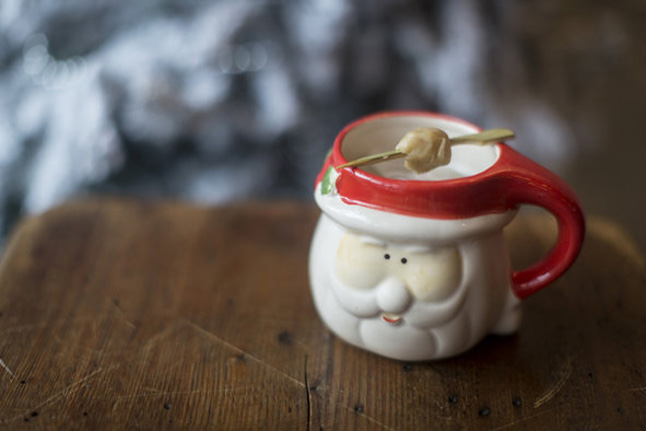 Even in a season spiked with boozy specialties such as eggnog, glÃ¶gg and hot buttered rum, a cookie dough cocktail might strike the casual drinker as ... well ... slightly gross.

Taylor is a mixologist who works for three restaurants in Washington, D.C., all lined up next to each other in the rapidly gentrifying neighborhood of Shaw. The restaurants close over the holidays and reopen as one combined Christmas-themed bar called Miracle on Seventh Street. It's a wildly popular pop-up conceit that draws standing-room-only crowds between Thanksgiving and New Year's.

Make no mistake. The crowds come for the cocktails as much as for the whimsical decor. (This year's themes include "Stranger Things," a nod to the hit Netflix show, as well as the country of Iceland and "Goats in Sweaters.") And the cocktail names refer to holiday movies such as Elf and Adam Sandler's song "Put On a Yarmulke" - that cocktail is intended to evoke orange and chocolate flavors, with ingredients such as Armagnac, creme de cacao and Boker's Bitters. The cocktails have been getting a lot of attention -- none more than the Christmas cookie cocktail, officially named "Snow Angels, Ice Skating, Cookie Dough & Snuggles."

Taylor and his staff dreamed it up by riffing on a more familiar drink: the White Russian. "And how do we get to the cookie flavor?" he recalled. "Well, what does a cookie taste like? Butter. Brown sugar."

So, they combined a rich simple syrup, made with brown sugar, with vodka washed with butter. Yes, we're talking butter-washed vodka. Taylor says the technique, known as fatwashing, is actually fairly simple.

"We melt the butter down, put the butter in the vodka, stir it up, let it sit for about four hours, then put it into the freezer, " he explained, pointing to this video that shows how to combine - then separate - alcohol and butter.

"It's about keeping your proportions to the right amounts," he continued. "The butter hardens on top. We let it infuse overnight and then we pull all the butter out and we strain it very, very finely. And so you have vodka that essentially tastes like butter."

This butter-flavored spirit is shaken together over ice with coffee liqueur, hazelnut liqueur, creme de cacao, half-and-half and salt. "The most important ingredient in baking cookies is salt," says Taylor. "At least for me."

The result is served in a Santa-shaped mug with a little ball of raw cookie dough skewered and served as garnish. (Two important points: The drink itself isn't a particularly appealing color, so it's best served in a nontransparent glass, and the cookie dough is concocted specifically without eggs, to avoid giving the gift of salmonella.) Taylor says Miracle on Seventh Street serves close to 3,000 of these cocktails every week.

"I'll probably be Christmas cocktailed out by New Year's, to be completely honest," he admitted. To celebrate 2017, he says, he plans to switch to champagne.