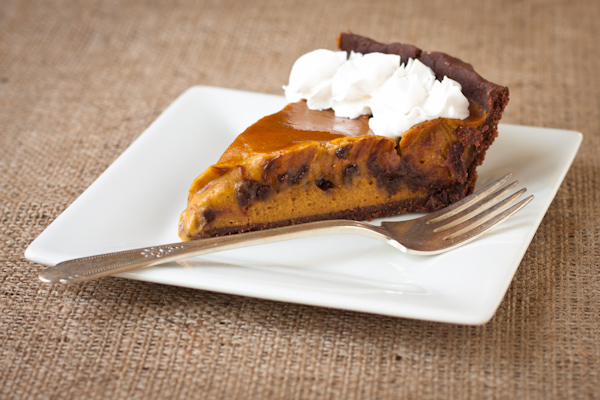 Last year, I was working on an event calledÂ TEDxSanDiego. As part of the team that was organizing the event, we had weekly meetings. Towards the end, right before the event, everyone was really, really tired. I was testing recipes from Hannah Kaminsky's pie book. So every week, I brought in pie. It was the thing that kept everyone going, and they were great recipe tasters. This one was the all-time favorite.

I tweaked Dreena's recipe, adding a touch less maple syrup and playing with the spice mix a little. I simplified Hannah's recipe by using dried chipotle powder instead of a canned chipotle in adobe sauce (I never know what to do with all those extra chipotle peppers once I open the can) and mixing the chocolate chips into the filling, instead of melting them on the crust. I had never tried flavoring my gluten-free pie crust, so instead of making Hannah's chocolate-crumb crust, I took a gamble and switched out some gluten-free flour for cocoa powder. The result is a creamy, rich chocolate pumpkin pie with just the right amount of sweetness and heat.