Chlorpyrifos: Linked To Autism, Still On The Market 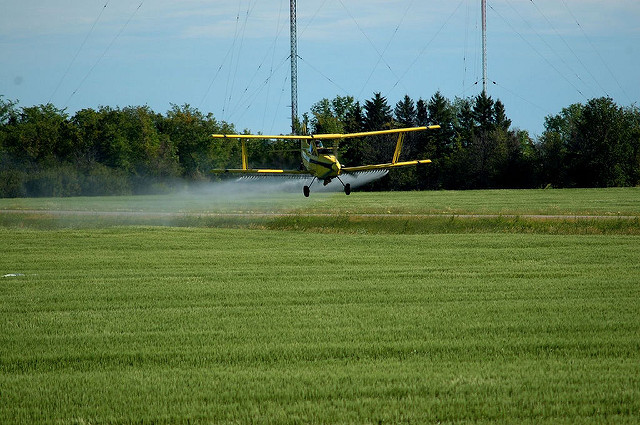 Until recently, a ban on the insecticide chlorpyrifos seemed likely. An Environmental Protection Agency report released after the 2016 election says the agency canÂ no longer verify the safety of the insecticideÂ on food crops. But with the potential dismantling of the EPAÂ on the horizon and a final decision about a ban yet to be made, there are mounting concerns that chlorpyrifos will remain on the market and in the fields.

Chlorpyrifos is an insecticide in the organophosphate class, a group of neurotoxic chemicals designed toÂ attack an animal's nervous system - including humans.

Through contamination of air and water, chlorpyrifos has been linked to autism, attention deficit disorder, intellectual disabilities, lower IQ, and Parkinson's-like tremors, in infantsÂ exposed to the chemical in utero and the first years of life.

Called the "Coca-Cola of pesticides," chlorpyrifos is used in about 100 countries, including some six million pounds on more than 50 types of crops in the United States. Chlorpyrifos was also previously used in in-home pesticides, including Lorsban, Lock-On, Dursban, and Cobalt products made by Dow Chemical.

Despite its widespread use, the safety of chlorpyrifos has been under investigationÂ for almost three decades. It was banned from residential use in 2001, and advocacy groups have worked since then to ban the chemical altogether.

Chlorpyrifos is introduced to the market.

Congress asks the National Academy of Sciences to investigate the dangers of pesticides in children's diets.

A Dow brochure with a photo of a woman and child calls Dursban, a product containing chlorpyrifos, safe and without long-term effects on humans.

The New York Attorney General Elliot Spitzer charges Dow with false advertising. Citing the dangers of pesticides and the particular risks they posed to children, the settlement of the case requires the agrochemical company to immediately stop using such language to promote its chlorpyrifos-containing products.

Despite evidence of its harmful effects on children, chlorpyrifos products are still on the market to kill cockroaches, termites, fleas, and other bugs. The annual number of chlorpyrifos poisonings, which cause twitching, tremors, slurred speech, and even paralysis and death â€“ particularly in children â€“Â reported to Poison Control Centers in the U.S. reachesÂ 7,000.

Virginia Rauh, an epidemiologist at the Columbia Center for Children's Environmental Health, launches an investigation of chlorpyrifos on 725 African-American and Dominican mothers and children in New York City.

Advocacy groups including Beyond Pesticides and Californians for Pesticide Reform ask the EPA to ban the chemicalÂ altogether, including its use in agriculture.Â Dow threatens to sue the agency if it tried for a full ban.

EPA bans chlorpyrifos for in-home use and sets limits on its agricultural application.

Professor Rauh's study data now reflects two distinct populations: babies born before the ban, and babies born after. (This will later raise questions of scientific validity, as the data reflected by the circumstances of the in-home ban cannot be replicated.)

Rauh's study shows babies born before the ban and exposed to high amount of chlorpyrifos tended to be smaller, have poorer reflexes, and weigh less in infancy. They also later lagged in motor and mental development, and were five times as likely to have symptoms of developmental disorders (including autism) and attention deficit disorders.

By age 7, the highly exposed children in Rauh's study had lower IQs than those with lower exposure.

Two concurrent studies â€“ one at Berkeley and one at Mt. Sinai â€“ have similar findings to Rauh's.

The nonprofit environmental law organization Earthjustice sues the EPA on behalf of the Pesticide Action Network, the Natural Resources Defense Council, and farm worker groups, to ban the pesticide for agricultural use.

During the discovery process of a legal case against Dow, Stanford professor Robert Sapolsky, an expert in the degeneration of nerve cells, is asked to review Dow's own studies of chlorpyrifos. Sapolsky found Dow's studies, which label the pesticide safe, to be "scientifically worthless," telling Lerner in an email he was "simply stunned at how bad the work was, how utterly awful every aspect of them was, from the scholarship to how the studies were conducted to how data were analyzed, to how everything was then interpreted."

A team of neuroscientists at Stanford later produced an unpublished report in 2008 and 2009 that shows all the Dow studies on chlorpyrifos contained errors and 89 percent "broke the basic rules of science."

In 2014, a University of California study called Childhood Autism Risks from Genetics and Environment, or CHARGE study, found that pregnant women who lived less than a mile from a field sprayed with chlorpyrifos were three-times more likely to haveÂ a child with autism. The CHARGE study also linked exposure to the chemical in utero with ADHD and other developmental delays and learning difficulties.

Earthjustice files a fourth lawsuit against the EPA, demanding a revocation of its approval of chlorpyrifos. This time, the EPA acknowledges the risks chlorpyrifos poses to the developing brain, but delays making a decision.

After years of study, the EPA announces in October 2015 that it can no longer vouch for the safety of chlorpyrifos on food.

By August 2015, after the EPA requested yet another delay before issuing a final decision, the court that had been hearing the chlorpyrifos case reached the limit of its patience.Â CallingÂ the delay in responding to the advocates' 2007 petition "egregious," three judges in the 9th Circuit Court gives the EPA a deadline for finalizing its rule: October 31, 2015.

On November 10, 2016, the EPA releases a report revising the risk assessment of chlorpyrifos, saying even a small amount of exposure (less than the amended amount outlined by the EPA in 2001) in infants can have harmful effects, like attention deficit, memory, and motor problems.

The implied next step is an outright chlorpyrifos ban â€“ a move the EPA has the power to make. But many are concerned the EPA may not last long enough to see it through. President Trump's pick to head the EPA, against environmental regulation, and Dow lobbyist Mike McKenna was a key player on the Trump transition team.

Longtime advocates, like Earthjustice attorney Patti Goldman, tell Lerner they are hopeful the pending regulation is too far along for the new administration to stop it, saying disregarding the mountain of scientific evidence would an egregious move, even for an administration packed with environmental regulation foes.

Dow is also exploring ways in which it can circumnavigate the EPA rulings, issuing a press release the same day as the November EPA statement saying: "The court ordered EPA to make a final decision on the petition by March 31, 2017, but did not specify what that decision should be."

Lerner points out that Congress could still issue a ruling that deems chlorpyrifos safe, or draft legislation giving Dow's neurotoxic products a pass.