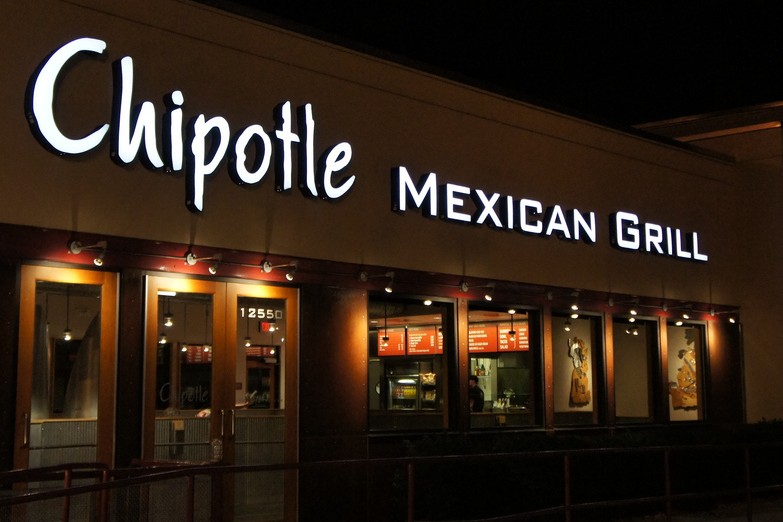 But there's another name joining the mix, and it's an unlikely one:

Let's get a few things out of the way. Yes, Chipotle is fast food. (Well, they call themselves "fast casual dining," claiming that their food is better than fast food, though that's for your taste buds to decide.)

And yes, investment by McDonald's spurred the chain's initial growth spurt in the early 2000's, though McDonald's divested itself of all Chipotle shares in 2006, when the company went public.

But despite these marks of foodie shame, Chipotle has been doing a lot to earn our love.

All The Right Moves

Recently, the chain made headlines by voicing support for stronger FDA limits on antibiotic use in livestock.

Their annual "Boorito" fundraiser at Halloween went to support Farm Aid and their own Chipotle Cultivate Foundation, which supports family farms.

Meat Without Drugs, Produce Without Miles

The company's money is where its mouth is: their mission statement calls for the use of free-range, hormone-free meat and dairy, and local produce whenever possible.

They source their pork from Niman Ranch, which purchases its meat from farmers committed to raising their livestock free of cages and antibiotics. As of June 2011, 100 percent of their chicken and 60 percent of their beef also met standards for antibiotic- and hormone-free, humanely-raised meat.

Do Your Ethics Slice Your Profits?

In theory, this means they're making a smaller profit margin than they would be if they bought their ingredients through traditional channels.

But the company's leadership assert that the additional investment actually benefits them in the long run, because ethically-raised meats simply taste better. As a result, they sell more.

When they replaced the factory-raised pork in their carnitas with Niman Ranch pork, "We started selling twice as many carnitas as we had before," says Chris Arnold, Chipotle's Director of Communications.Â Â

Of course, there are limits to Chipotle's to how local, seasonal, natural and ethical Chipotle can be.

For one thing, there's Niman Ranch, whose ability to sell "natural" meat relatively cheaply may come at the expense of the honesty of that "natural" label. (Watch this space for a feature on Niman Ranch, coming soon.)

Then there's the challenge of maintaining a consistent menu year-round and nationwide. A Chipotle restaurant in Iowa needs avocados as much as the one in California does. Off-season, both of those locations probably get their avocados from Mexico or Chile. The same goes for the lettuce and tomatoes.

The Coalition of Immokalee Workers, an organization that campaigns for fair wages for farm workers in the United States, also points out that Chipotle has failed to sign on to their Fair Food Program, which seeks to put pressure on farms to ensure their produce pickers are paid a fair wage.

Does Chipotle make a better burrito? Yes. But that doesn't mean there's no room for improvement.