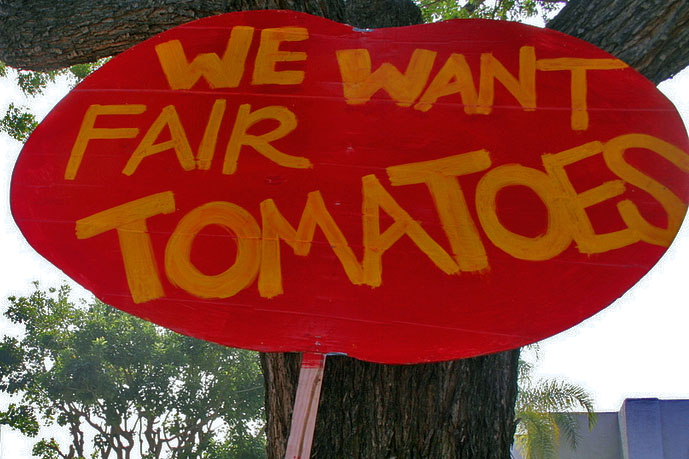 Chipotle Mexican Grill signed a fair food agreement with the Coalition of Immokalee Workers (CIW) on Thursday, October 5 in Denver.

This signature ends a six-year feud with the CIW, an organization that campaigns for farm workers to be paid a fair wage and provided with good living conditions.

Chipotle has long promoted its image as ethical, emphasizing that their pork is pasture-raised, hormone-free and sourced from small farmers, and that it buys produce from local farmers whenever possible.

But the Coalition of Immokalee Workers has countered that to truly provide "food with integrity," the chain must defend the rights of the people who harvest their produce.

By signing on to the CIW's Fair Food Program, Chipotle committed to purchasing Florida tomatoes grown only on farms whose minimum wage and living conditions are monitored by the Fair Food Standards Council.

These farms offset their higher costs by charging a penny more per pound for these tomatoes.

Chipotle first discussed joining the Fair Food Program in 2009, but talks fell apart because the agreement would have required Chipotle to gain approval from the CIW before buying tomatoes from a non-approved farm.

The company worried that it would be not always be able to source tomatoes of the quality it needed from approved farms.

Spokesman Chris Arnold asserted that while Chipotle had not signed on to the Fair Food Program, it has sourced all of its Florida tomatoes from CIW-approved farms since 2009.

Chipotle sources between 15 and 20 percent of its tomatoes from Florida. The rest come from California and Arizona.

Chipotle is the 11th major company to sign on to the Fair Food Program, joining the ranks of McDonalds, Subway, Taco Bell, Burger King and Trader Joe's.