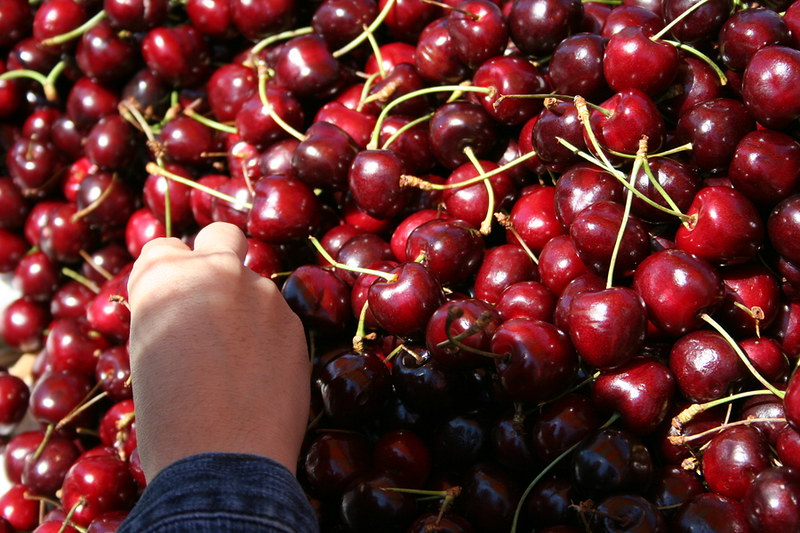 Cherries are among the most sensitive fruit crops to pick, requiring skilled hand pickers to harvest the ripe fruit with easily damaged skins. (Colin Charles/flickr)

Farmers across the country have faced labor shortfalls as seasonal workers have skipped harvest season during the pandemic.

The worst-hit crops require the most amount of labor, such as cherries, plums and apples.

Unlike many crops, cherries repel machine harvesters and other labor-saving production tools because of their fragile nature.

They have to be picked by skilled hands and shipped right at the moment of ripeness.

That shortens the amount of time en route to retail shelves, and makes them more subject to bruising and splitting along the way.

The Washington State Tree Fruit Association says that during an 8-week harvest season for cherries, up to 24 billion individual cherries have to be picked and sorted before getting shipped to market.

Even before COVID-19, the number of seasonal farmworkers, often immigrants without legal permission to work, had been waning in recent years.

Many have left the industry for good amid poor pay, exploitation, and border crackdowns.

But labor shortages due to the pandemic this year have left farmers overall desperate to find help during harvest, leaving a wake of crops rotting in fields.

The Seattle Times reported this week that in Okanogan County, Washington, cherry pickers described lapses in safety measures against coronavirus, such as failure to do daily temperature checks, or neglecting to report signs of illness to keep workers in the field.

Many workers went home in July due to fear of rising infection rates on farms. Seasonal contracts normally extend to November.

Data from the National Agricultural Statistics Service indicates that Washington, the nation’s largest cherry producer, was expected to see a dip in production from 239,000 tons in 2019 to 210,000 tons this year.

Some of that decline is due to frost damage from early spring.

The pandemic also comes as Pacific Northwest cherry growers battle a resurging disease known as Little Cherry, which has been rising since 2017.

The disease is carried and spread by leafhoppers and causes trees to produce small, colorless fruits.

Previous outbreaks struck in the late 40s and then again in the 80s.

Mexican Workers Who Left Mid-harvest Describe A Covid-ridden Cherry Season In Okanogan County: ‘It Was Like We Were Disposable’ (Yakima Herald)