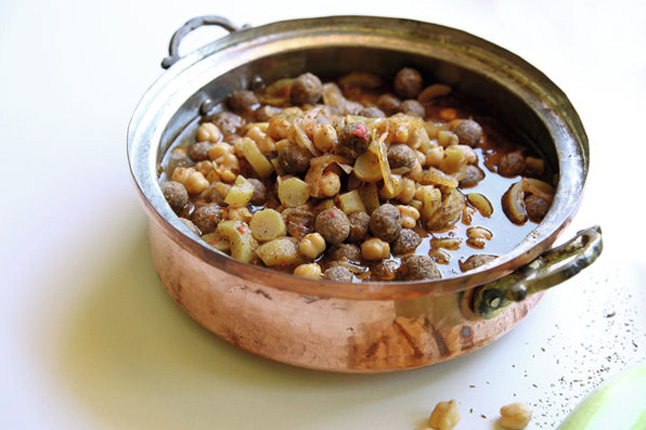 Barbara Massaad was watching a TV news program about the plight of Syrian refugees from her apartment in the suburbs of Beirut when she decided to visit a refugee camp herself.

"I just wanted to go and see what was happening," she told me. "So I went and started taking photographs and talking to people about food."

Why food? Because Massaad is a cookbook writer and photographer. She grew up working at her parents' kabob shop in Ft. Lauderdale, Fla. Then she became a force in the Slow Food movement, starting the Beirut chapter, and racked up prestigious gastronomic awards for books like Man'oushe: Inside the Street Corner Lebanese Bakery.

A mother of three, Massaad says she was particularly touched by the Syrian children she met and photographed at the camps. She wanted to raise awareness, so she thought about writing a cookbook based on Syrian cuisine, or perhaps a more sociological look at what refugees actually eat. But then, she reconsidered. After all, who wants to eat like a refugee? Then came a call from a friend who, with Massaad, helps run a Beirut farmers market.

"And she said, 'Hey, Barb, why don't we make soups and just give them out to refugees at the farmers market on Tuesdays?'" Massaad recalled. "We made, like, really hearty soups with beans and vegetables and pasta. And lentil soups, because lentils are really popular around here."

Then the idea struck: a cookbook - to benefit refugees - devoted entirely to soup. Massaad called upon an all-star lineup of culinary celebrities for help with Soup for Syria.

"I'm friends with Alice Waters," Massaad says of the pioneering farm-to-table owner of Chez Panisse in Berkeley, Calif. "I contacted her and of course, everything that has to do with humanitarian efforts, she was like, 'Of course.' "

Waters contributed a recipe for carrot soup. TV host and writer Anthony Bourdain pitched in with one for soup au pistou, with white beans, leeks, fennel and zucchini. The Israeli-born British restaurateur Yotam Ottolenghi, of such cookbooks as Jerusalem and Plenty, sent a recipe. So did such stars as Paula Wolfert, Claudia Rodan and Mark Bittman.

"It's an easy ask," Bittman says. He's the bestselling author of How to Cook Everything and How to Bake Everything, and he created the Minimalist food column in The New York Times. Bittman says you feel connected to a place when you eat or cook its cuisine.

"You know, I gave them something that's quite the opposite," he said. "I gave them a Korean soup recipe. But they wanted to put together a cookbook that had an international flair to it, and it seems that's what they got."

Readers will find various soup recipes that range from Armenian Cabbage to Iranian pomegranate to Portuguese chickpea to Turkish black-eyed pea with lamb and noodles. They might sound exotic, but Massaad wanted the recipes in Soup for Syria to be easy-to-make and accessible, in terms of price. Soup is universal comfort food, says Massad. It bridges cultures.

So far, Soup for Syria has been published in the U.S., the UK, Italy and the Netherlands. And it's about to come out in Germany and Turkey. Massaad says all proceeds benefit the UN's work with refugees and other charities on the front lines of assisting them, such as the Syrian American Medical Society, which runs hospitals in refugee camps. And with very little attention or publicity, Soup for Syria has already raised more than $300,000.