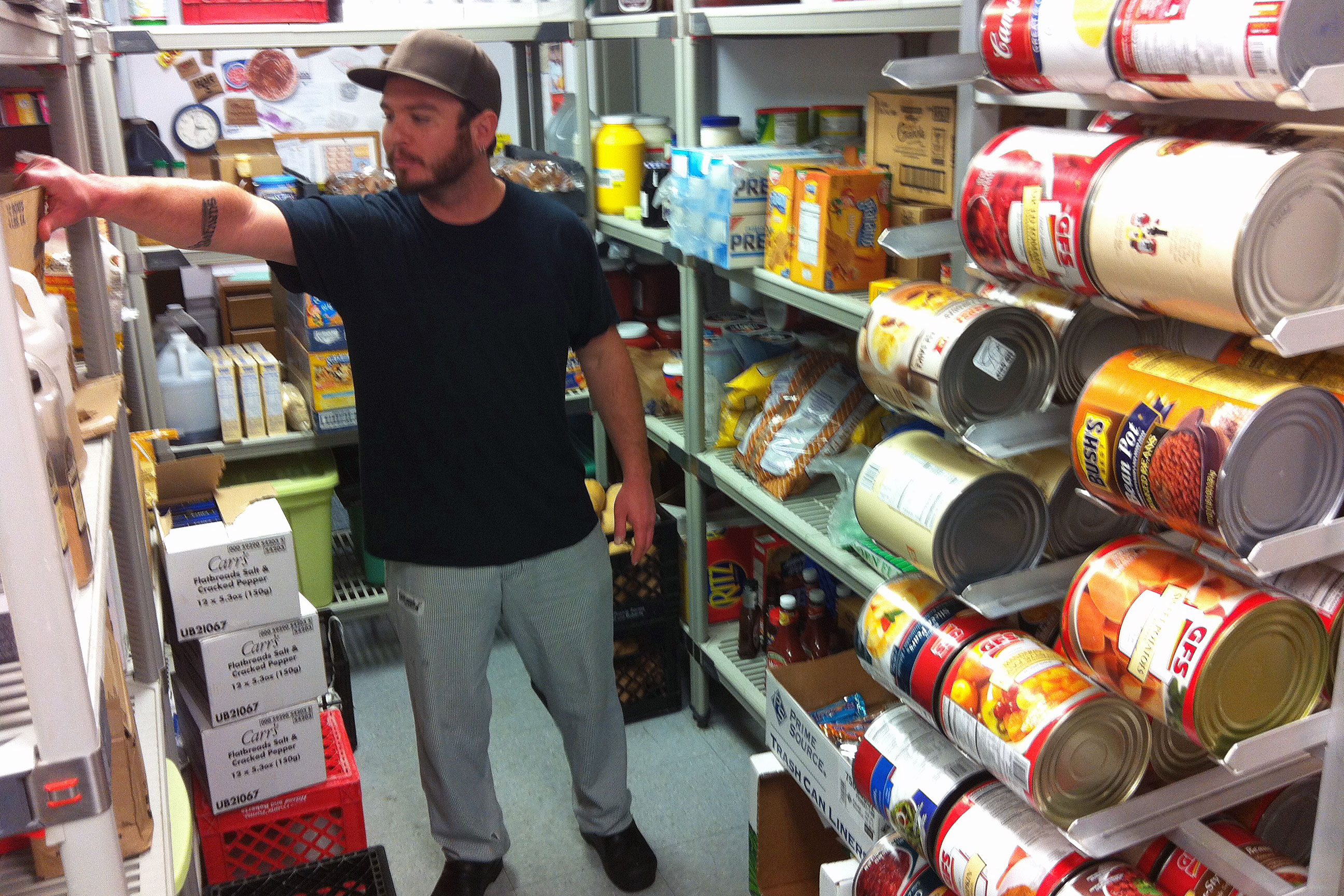 What's In The Freezer

"This box of corn dogs has been here since I got here," says Bob Adkins, cook at the Monroe County United Ministries (MCUM). "It's a monument."

He cooks three meals for 80 kids every day at the MCUM daycare facility. The three-door freezer also contains plenty of ingredients he uses all the time -- bags of apples and bananas, huge vats of fat free yogurt and salad that's already chopped.

He points to the bunch of Brussels sprouts. He's had success getting kids to enjoy this cruciferous vegetable. "The preferred preparation before was boiling, and that just turned them to mush," he says. "But if you roast them from a frozen state, they're not so bad."

Longtime Earth Eats listeners will recognize Adkins as the former Chef de Cuisine at FARM Bloomington. He's now splitting his culinary life between being the chef at the Bloomington restaurant The Rail and being the cook at MCUM.

The situation at MCUM is far from what he's used to in a professional kitchen. The electric stove takes 45 minutes to boil water. He sources his ingredients from the local food bank. And, he has only one assistant, Derrick Mackie. In addition to their cooking duties, they also set the chairs, sanitize the tables and wash all the dishes.

"This is not a glamorous chef job," says Adkins. "I will say it was a lot of pride swallowing to become a lunch man or a lunch lady."

Creativity In The Cafeteria

But this is more than simply a pay-the-bills job for Adkins. He's serious about the food he serves to the kids, making sure it's as nutritious and delicious as the circumstances and his shoe-string budget will allow. He's gotten creative with his ingredients list (i.e. Sriracha, curry powder and coconut milk) and the kids are surprisingly receptive.

One of their favorite dishes? Baked cod with lemon pepper salt and extra virgin olive oil.

Adkins might not ever serve those ancient corn dogs, but he's not completely forsaking traditional cafeteria fare. For instance, he serves chicken nuggets maybe once every six weeks. The rest of the time, he uses his chef chops to prepare high-class school food, like turkey meatballs with brown rice and homemade focaccia bread, and pizza with whole grain dough and homemade sauce.

"It relies a lot on somebody that understands how food works and how the kids are going to work with it," he says.

His training has taught him to serve new and unfamiliar foods to the kids at least five times. If at that point they are still throwing it away, then he reconsiders his menus.

Does he receive verbal feedback from the kids? Absolutely.

"The beauty of kids is their honesty," he says. "Sometimes they'll look up at me and say, 'Bob, I don't like this.' I can't say much, I really can't."