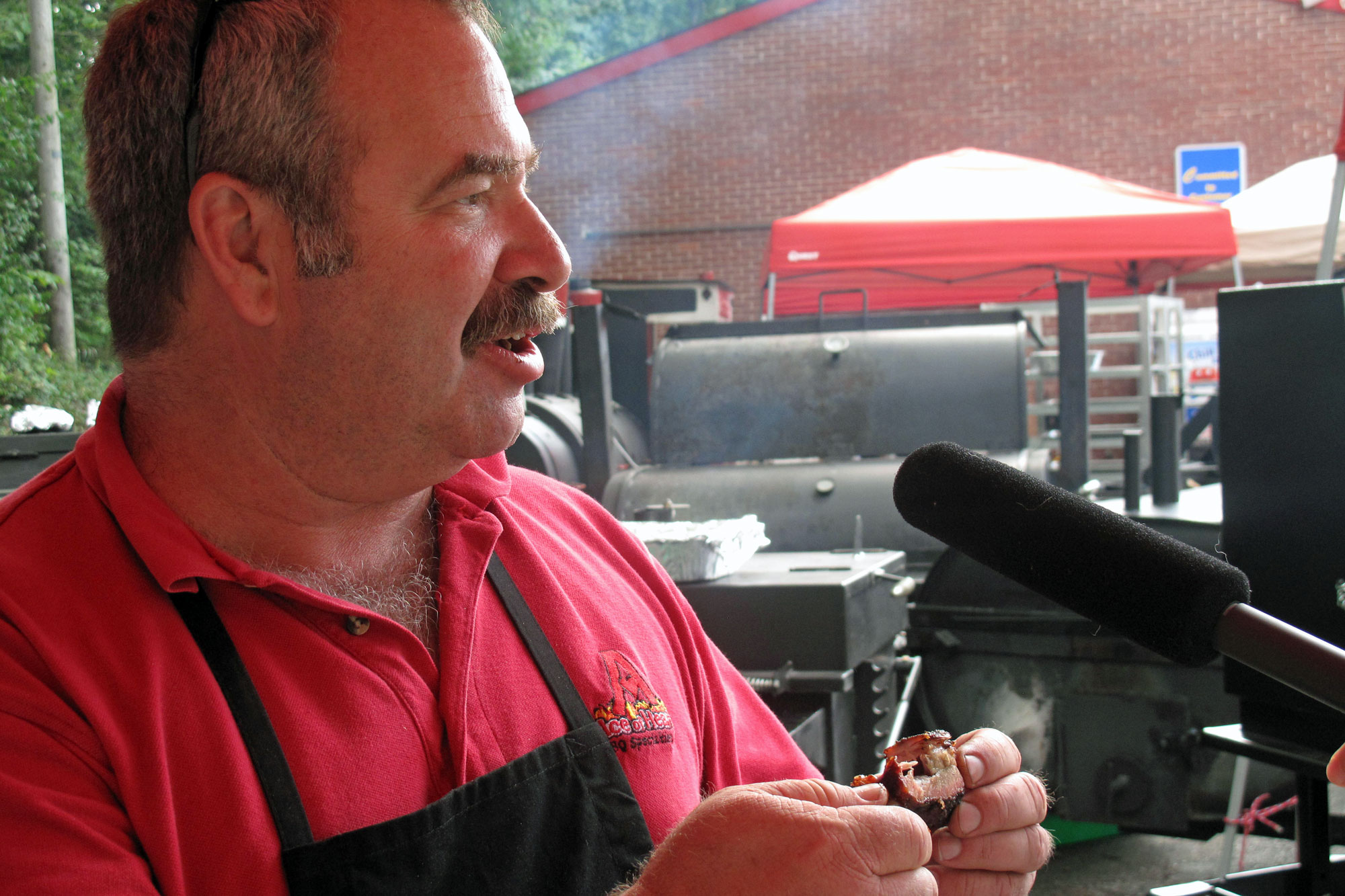 Chris Smith, owner/operator of the Short Stop Food Mart and gas station, doesn't need much of an excuse to get his Barbeque Train going.

"It's Thursday, and in Bloomington, Indiana, Thursday is barbecue Thursday. Everybody in town knows that!"

Parking at the Short Stop comes at a premium on barbecue days. It's not located on a main thoroughfare, which is a good thing because traffic is backed up for a block in both directions. The food table has a line of people that stretches past the gas pumps.

And it's not even dinner time yet.

They serve up Texas-style brisket, Carolina-style pork and Chicago-style ribs every Thursday during the summer through the early fall.

Champ In The Parking Lot

This is a special Thursday because Smith is sharing his parking lot with award-winning barbecuer and educator Chris Marks.Â Marks has won the American Royal Barbecue Contest Grand Championships nine times along with 45 other regional contests throughout the U.S.

So what's his secret?

"Low and slow," he says. "It's a different type of cooking, but look at the different flavors you get with it."

Marks is a slave to flavor, so no, he would never dream of speeding up the cooking process by using a gas grill. "Sacrilegious!" he says. "Gas is for ease. We call it turn and burn."

Marks teaches barbecue boot camps all over the country. Short Stop's barbecue cook Gerrick DeVane attended a class last year in Sellersburg, Indiana along with food writer Lynn Schwartzberg. They came back from the class wanting Short Stop to start cooking Kansas City-style ribs, but Smith says his customers might not be ready for that.

"The problem is it's regional. You gotta be careful about your regions," he says. "Around here, people like Chicago-style ribs," which means falling-off-the-bone meat.

Smith and Marks both agree -- that's an over-cooked rib.

"That's why all the restaurants do it, the big chains, because you can't mess them up," says Smith. "You season them right, put the right sauce on them, you cannot mess them up.Â To do a real competition-style, or Kansas City-style rib is very difficult and timing is everything. And then the question is can you deliver those all day?"

Marks grabs one of the ribs he cooked today and takes a big bite to demonstrate what a perfectly cooked rib looks like. "When we bite that rib, we want to gently tug it," he says (with a full mouth). "You take another bite, and you see how that bone comes clean."

Best On The Menu

In addition to the ribs, Marks and Smith are serving Scotch eggs, fatties, shrimp, salmon, sausage links and lamb chops.

Smith's pick for the best item on the menu today:

"Shoulda gotten the brisket, but it's gone."