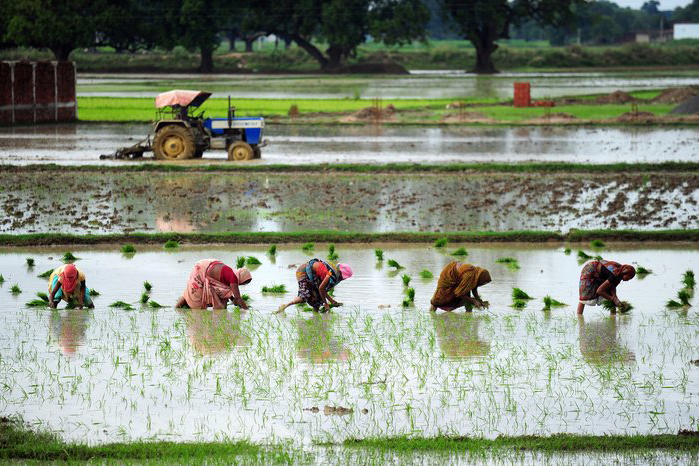 Rising carbon dioxide levels could have an unexpected side effect on food crops: a decrease in key nutrients. And this could put more people at risk of malnutrition.

A 2014 study showed that higher levels of carbon dioxide in the atmosphere are likely to put a dent in the protein, iron and zinc content of rice, wheat, peas andother food crops. Samuel Myers, an environmental health researcher at Harvard's School of Public Health, was the lead author on that study.

This time, Myers and his colleagues wanted to quantify what those changes might mean for people around the world. To do this, they built a new database detailing the foods people in each country eat and the nutrient content of those foods. The database lists the "per capita consumption of 225 foods for 152 different countries." It also accounts for differences in diets in each country based on age and gender.

The database allowed them to calculate the number of people within each country that aren't getting enough of certain nutrients. They could then project changes in the protein and iron content of their diets through 2050. Their results appear in two new studies published Wednesday.

One study published in Environmental Health Perspectivesestimates that the predicted decreases in the protein content of food crops may put about 150 million additional people at risk of protein deficiency by 2050. The other study, published online in GeoHealth, found that the available dietary iron supply could decrease in some high-risk regions.

Wheat and rice are not high in protein, but nearly three-quarters of the world's population uses these two crops as "primary protein sources," the study says, based on data from the U.N. Food and Agriculture Organization.

And so, any reduction in protein contained in these crops can lead to health problems, particularly for poorer people in low income countries, saysMyers.

Eighteen countries in Asia and Africa – including India, Bangladesh, Turkey, Egypt, Iran and Iraq — may lose more than 5 percent of their dietary protein, the authors find. For about 150 million people in these countries, that loss is enough to make them protein deficient.

Protein deficiency is known to lead to low birth weight, stuntingand other growth issues that influence overall health and well being.

The changes could hit particularly hard in India, which already has one of the worst rates of malnutrition in the world. The new findings predict that the country could have 53 million additional people at risk of protein deficiency by 2050.

But the study brings one good news: legumes are expected to be more resistant to these changes in protein content than crops such as rice and wheat.

"Diets that are rich in those pulses would be protected in both ways — they'd already be higher in protein and they'd be less sensitive to higher carbon dioxide [in the atmosphere]," Myers says.

The study on iron deficiency found that 354 million children aged 1 to 5 and about 1 billion women of child bearing age live in countries where the amount of dietary iron is projected to fall by more than 3.8 percent. These countries already have a high prevalence of anemia.

Iron deficiency is the most common cause for anemia. And a "staggering" number of people are anemic – two billion, according to the World Health Organization. Iron deficiency can also impair growth and lower children's IQs.

According to the new study, south and southeast Asia, sub-Saharan and northern Africa and the Middle East are at highest-risk of experiencing a further rise in number of people with iron deficiency. These areas are economically poorer, and people there get most of their iron from plants.

"It seems like quite a big wake-up call for the nutrition community," says Lawrence Haddad, executive director of the international NGO Global Alliance for Improved Nutrition. "We're already agonizing about anemia. This gives us even more emphasis to do something."

Haddad says he is most concerned about South Asian countries, where people eat a lot of rice and poor people can't always afford other foods rich in iron and proteins, such as green leafy vegetables.

Myers offers some measures that countries could adopt to reduce the health effects suggested by the new studies. Developing crop varieties with higher nutrient contents is one potential solution. And providing subsidies for more traditional, nutrient-rich grains could make these crops more affordable.

But these solutions aren't new and they aren't always easy to implement.

"It's not a simple thing. These are countries that are strapped for resources," he says. "It's not like there's some easy silver bullet."

For Haddad, the new studies reinforce the need to reduce emissions of greenhouse gases.

"It's yet another reason we need to worry about mitigating carbon dioxide emissions," he says.