Why Do We Have To Buy More Herbs Than Recipes Call For? 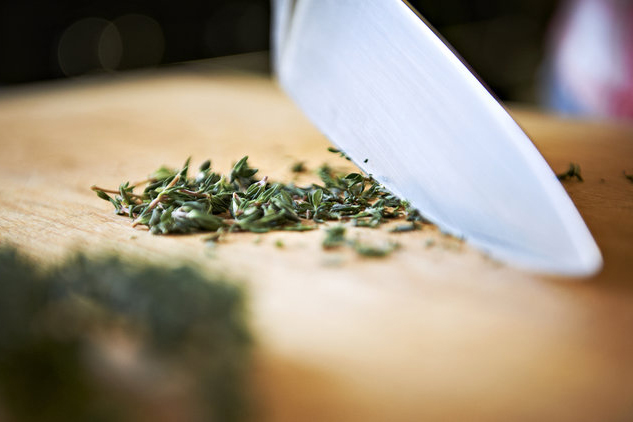 When was the last time you used the entire container of fresh herbs you bought at the store? Never? Me too. Every time a recipe calls for 1-2 tablespoons of freshly chopped sprigs, I head to a supermarket and reach for a plastic container holding at least three times as much as I need. A few days later, I'm standing by the trashcan observing a moment of silence before I discard a plastic coffin of wasted, withered basil.

I know I'm not alone; my friends have sent me all-caps text messages complaining of the same thing. And the Twitter world is full of aggravated home cooks — as well as far too many puns about "wasted thyme."

"I still find myself wasting food that is sold in larger quantities, particularly fresh herbs," says Danielle Rose, a Toronto-based food blogger whom I reached out to over Twitter.

So why are herbs sold in such copious amounts? I put the question to Steven Hurwitz, founder and CEO of Bay Area Herbs & Specialties, a company that gets herbs and other produce from suppliers worldwide and packages them for distribution nationally.

The most common herb containers Hurwitz sells to retailersare plastic "clamshell" containers — whose plastic top and bottom snap together like a clam's shell — with two-thirds to one ounce of herbs. These are the plastic coffins featured prominently in my refrigerator. Hurwitz explains the containers keep herbs fresh longer.

"Basil is the most finicky," says Hurwitz. "If you look at it wrong, it might turn black. It's sensitive to heat, to cold and to gases." (Incidentally, he says it will keep better in a cup of water at ambient temperature than in the fridge. Whoops.) The clamshell helps insulate the basil from changes in the environment during transportation or storage at the supermarket.

As for the size of these containers, Hurwitz says it's driven by grocery stores. "If you gave consumers exactly what they want for the recipe, it would be such a small package," he explains. "It wouldn't give the retailers the [dollars] they would want at the checkout."

But Hurwitz admits that he, too, has sighed at the amount of packaged herbs withering in his fridge. "Even if shoppers are getting more than they need, it doesn't feel like value," he says. "It feels wasteful."

And this isn't just about the stab of guilt that comes when the trashcan lid thumps shut. When food goes to landfills, it breaks down and releases methane, a powerful greenhouse gas. Tossing food also wastes the water used to produce it, according to the National Resources Defense Council: Throwing out a pound of bananas is the equivalent of taking a 42-minute shower. An estimated 40 percent of food is never eaten in the U.S.

"I don't buy cilantro anymore because I can't use a bunch of cilantro," says Dana Gunders, a senior scientist at the NRDC.

So, if customers want smaller quantities, Means suggests asking employees at grocery stores. "Be in charge of your food," she says. "Just ask, 'Is there a way I can buy two stalks of celery?'"

So far, consumers may be spending more time fuming on Twitter than talking to their local grocers or showing what they want through their purchases. For example, Hurwitz says his company created a one-fourth ounce sized container, roughly sized to an individual recipe's demand. But the containers have not taken off, because consumers have not bought enough of them to make it worth retailers' time.

That said, some produce is already moving to a forage-as-you-will model. "We're starting to see spinach sold where you can just take as much as you want, and I think that makes a lot of sense," says NRDC's Gunders.

Hurwitz says there are some promising trends for fresh herbs as well. For example, home-delivery meal companies like Blue Apron have been demanding recipe-sized containers for herbs, and small, loosely tied sprigs are featured in some groceries. These groceries tend to be located close to distributors, minimizing the time herbs spend in transit, and usually serve sophisticated shoppers who know how to store the herbs, he says.

For herbs still sold in larger quantities, though, Gunders advises planning for two meals when at the store, with the second repast making use of leftovers from the first. She suggests freezing herbs, drying them, making herbed butter with them, or growing favorites in a pot at home.

Similar techniques have worked for foodie Rose. She whips cilantro into pesto sauce and gives herb care-packages to her family. And she tries to have some fun with the specter of the trashcan.

"I tend to like the challenge of using up the fresh food I have," Rose says. "Some of my favorite recipes have been born thanks to an attempt at avoiding food waste."

Gnawing Questions is a semi-regular column answering the food mysteries puzzling us and our readers. Got a question you want us to explore? Let us know via our contact form.