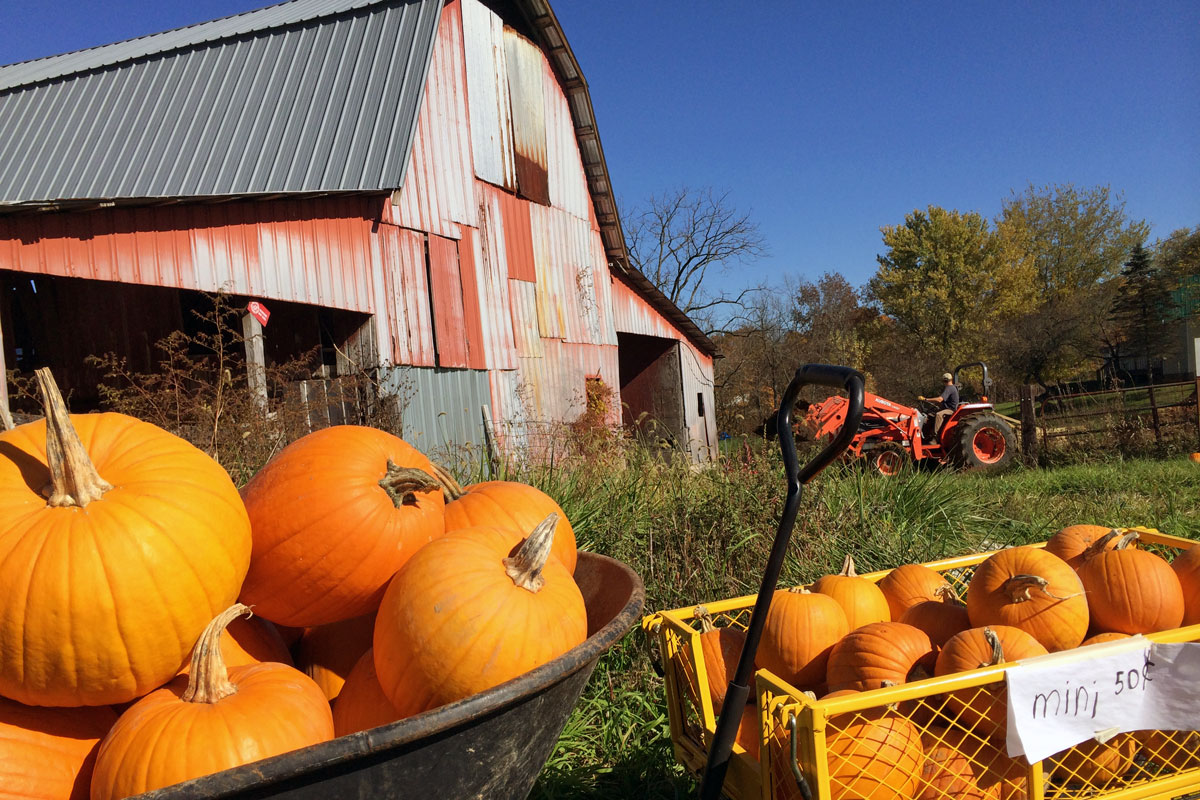 As you drive up Bethel Lane in Bloomington, Indiana, you seeÂ a big red barn. Mike Record considers this barn a marketing tool for his new farm.

"We're going to try and capitalize on that by being able to sell vegetables from the farm here and hopefully the red barn will be a distinguishing feature, a landmark," he says.

Everything about Mike's 22-acre farm is about growing a successful business. The barn is about marketing. All aspects of his property serve the larger purpose. He's also currently working to get USDA Certified Organic, which forces him to take a hard look at his growing practices.

But the first step in branding his farm was finding a name -- New Ground Farm.

Part of the reason for the name is because he doesn't think vegetables have ever been grown on this land. But also, Mike calls hisÂ methods a new type of farming.Â "Small and intensive with direct attention to the customers that eat the food. So, kind of paving new ground in terms of agriculture," Mike says.

When you look around the field, you'll notice there's not a lot of infrastructure. Mike is using trial and error before he makes anything permanent.

"We want to be able to change things around and not have something we installed in a permanent way that we cant change," Mike says. "For example the blue pipe is how we got water out in the field. It's flexible, its like a water hose that runs from near the barn to all the way at the end and it enabled us to get water out to irrigate but, we can roll it up and move it if we decide it isn't the best place for it."

I think primarily the general consensus in the field is that it's not really worth it for small operations (to get certified), so maybe we're kind of going against the grain a little bit.

All of their decision-making began a year ago when they were faced with a choice -- continue growing produce on leased land in Colorado, or move back to Indiana and own their farm? They chose Indiana. They immediately saw value in an old goat farm. The next choice was, do they work to become USDA Certified Organic?

Mike had mixed feelings about it.

"I think primarily the general consensus in the field is that it's not really worth it for small operations (to get certified), so maybe we're kind of going against the grain a little bit," Mike says.

With the infrastructure on his farm still in flux, Mike thought it was a good time to start the certification process. He grew food using organic practices when he livedÂ in Colorado, where he was Certified Naturally Grown. The thing that appeals to him most about organic agriculture is its emphasis on being good to the soil.

"The way you treat the soil first and then ensure that its healthy, and then from there that moves towards products that are healthy, whether it's produce or meat," Mike says.

However, organic farming isn't just about growing healthy soil -- there's a lot of red tape. Record is working on building an Organic System Plan, which involvesÂ a lot of record keeping.

According to Mike, "It describes how we produce our products. Then we have an inspector come and look at the farm and verifies what we've got in our plan is actually what were doing. When that's done, the certifier, or third party entity will either approve or deny the application."

Through all of this hard work, Mike is becoming certified organic for many reasons.

"I guess for us what it has served to do is to really force us to think about how we want to farm and our processes, and then get that written down on paper because you have to have a plan, and you have to follow that plan."

This story was produced in collaboration with students from the Indiana University School of Journalism.