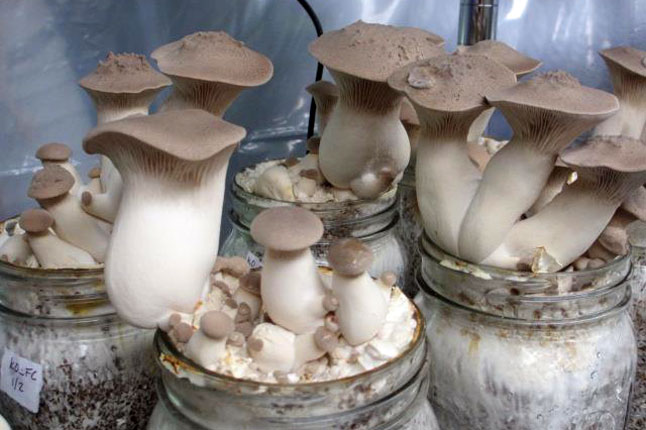 'Tis The Season For Cultivation

There are many fungal delicacies fruiting this time of year:

But if mushroom hunting isn't your thing, you can pick up some cultivated fungi from a grower like Alan Barker of Brown County Fungus Farm.

He started selling his mushrooms about a year ago when he decided to turn his hobby into a business. He says mycology is something very well suited to the hobbyist. "One thing I've learned is they're more forgiving than non-forgiving," he says. "It's a whole lot of fun because when you wake up in the morning, they're bigger by the time you go to bed, so you can almost literally see them growing."

He has custom designed each piece of equipment to fit his specific needs -- from the grow tents to the way he accounts for water drainage.

The fungi are grown in jars and incubators.Â The jars are filled with hardwood sawdust he gets from the Helmsburg Saw Mill and mixed with a wheat bran supplement to add nitrogen and nutrients for increased yields.

Barker has also experimented with cultivating outdoor mushrooms like King Stropharias. To get them fruiting, he digs a hole in his garden, fills it with sawdust and plants the mushrooms spawns.

He says mushrooms are a beneficial addition to any garden. They help the other plants by fighting off competitor microorganisms, viruses, bacteria, mildew and mold. Additionally, theÂ mycelium spreads through the soil loosening it. As it spreads, it seeks out nutrient pockets and distributes them throughout the mycelial network, improving the quality of the soil overall.