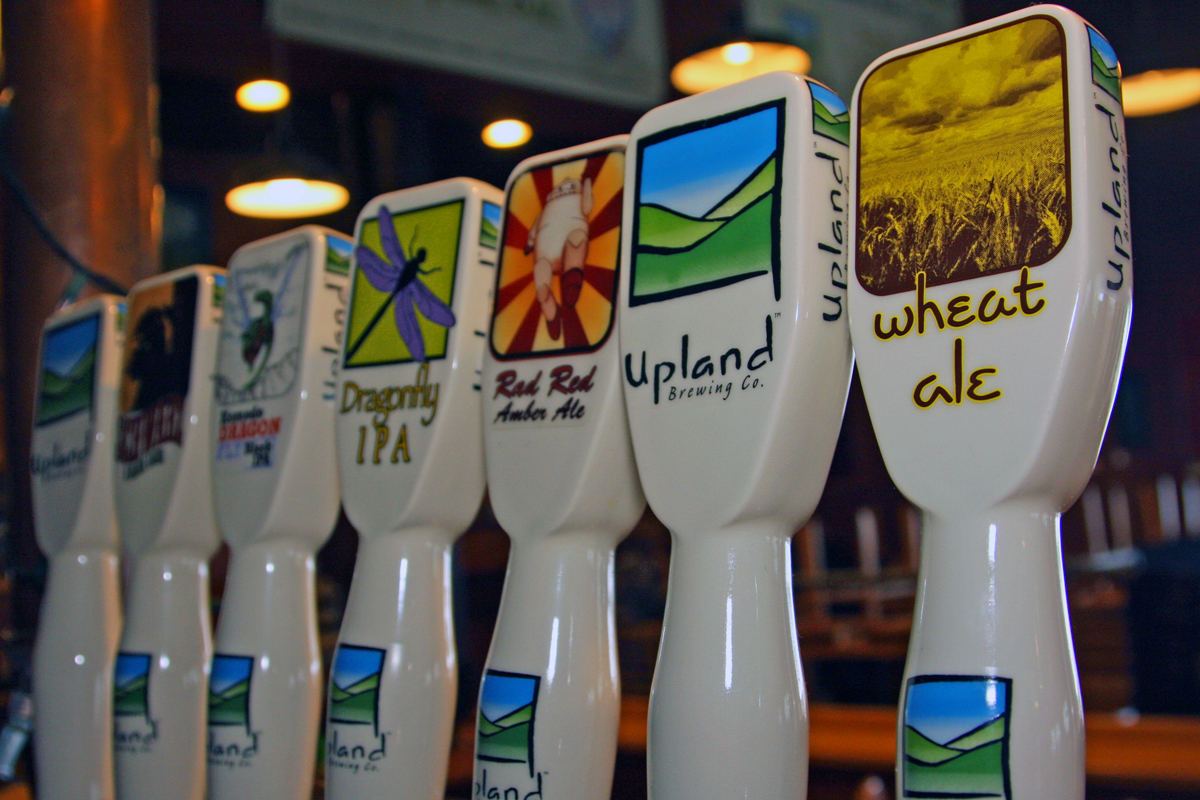 Upland Brewpub in Bloomington is usually crawling with revelers enjoying craft beer and local food. When I stopped by last week before the lunch rush, it was mostly construction workers making a lot of noise.Â Upland Brewing Company is expanding its restaurant on 11th Street, adding more bathrooms and a second bar and upgrading the kitchen.

The noise level would be very different the next day, for the annual UpCup Homebrewing Competition.

There will be a dozen really committed craft beer judges who will come to town at 9:00am. Instead of it being a typical beer drinking session at a beer festival, it's very very serious. The room's dead quiet. It's the wonkiest exercise you've ever seen. It would rival the excitement level of an archeologist convention.

This was the seventh year of the homebrewing competition. There were 60 entrants. It's an event they take very seriously at Upland.

"Quite frankly, brewing on a small system is much harder than brewing on a big system," says Dayhoff. Â "So those guys have to put a lot of time and attention to make a beautiful beer, and we totally respect that."

Craft brewing can trace its roots back to homebrewing. In fact, many professional brewers, like Upland's Caleb Staton, started making beer in their basements.

After five years of brewing on his own in Muncie, Indiana, he enrolled in the University of California, Davis master brewer program. He has been the head brewer at Upland now for ten years.

Over two-thirds of what Upland sells is its Wheat Beer and its Dragon Fly IPA, but Staton still gets to flex his brewing creativity at the main brewery. He is able to experiment with new recipes 10-gallons at a time.Â If the beers are received well at the various Upland brewpubs, then Staton and his team will think of scaling up those recipes.

Scaling up is one of the prizes for winning the UpCup. That homebrewer will have his or her beer made on Upland's equipment and sold at the various pubs. Staton remembers the first winning beer -- an Imperial IPA. "It was actually the first Imperial IPA that we brewed as a company, so it was kind of neat that it drove us to innovate."

I've always felt like if more people can drink craft beer and be thoughtful about their choices about what they're drinking, that we'll get our fair share of the up side of the category growth.

They've featured everything from a Rauchbier, which is a smoked beer to a milk stout.Â Last year's winner was a Berliner Weisse, a traditional German sour beer that is served with various flavored syrups. They made that available on tap leading up to this year's competition.

"These are new styles for us that are challenging to incorporate into our brewhouse, and it's been really fun," says Staton.

The construction at Upland shows just how good business is.

Craft beer in general is only getting bigger. It's becoming so profitable, in fact, that big beer corporations are creating brands that pretend to be like the little guys. Dayhoff gives the examples of Shocktop and Blue Moon.

Is he worried what this trend could do to business? A little, but there's also something kind of charming about it. "It certainly brings people out of domestic, light, yellow lagers and into more flavorful beers," he says.

He adds that if the category of craft beer can grow, Upland will reap the benefits over the long haul.

"I've always felt like if more people can drink craft beer and be thoughtful about their choices about what they're drinking, that we'll get our fair share of the up side of the category growth," he says.