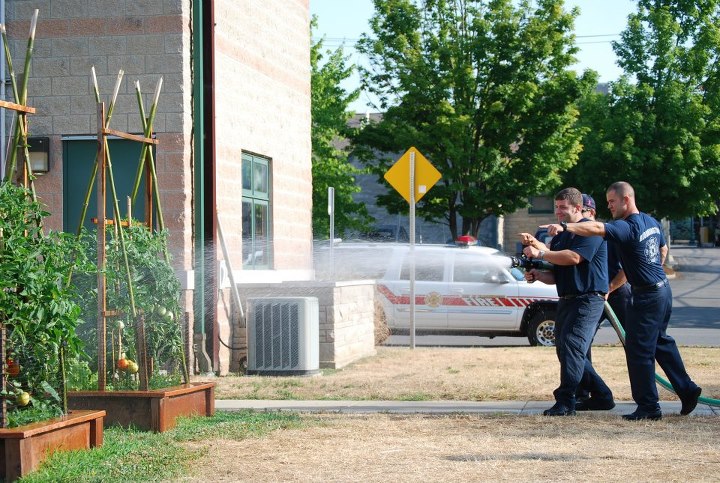 Ferrol Johnson figured the downtown City of Bloomington Fire Station would be the perfect location for one of his show gardens. "We wanted to position it close to a water source, and that was one of the obvious benefits of the fire department -- it's what they do best."

Johnson is the owner/operator of Abundant Harvest Farms. Residents can see his other guerrilla garden installations at the Harmony School and the Southside Recycling Center.

In addition to spreading the good word about organic gardening, he uses these raised beds as advertisement for his organic plant food and soil amendment. He says if you follow his recipe for soil optimization, anyone can create healthy, living soil in which to grow food.

"When you properly set-up and organize the bed you're going to have a lot more success, and success will keep people interested." (Want to know more? Johnson says attend his workshop.)

Better Than The Grocery Store

The two raised beds don't look like much, but there's plenty of produce growing inside -- tomatoes, cucumbers, jalapeños, lettuce, beets, radishes and spinach.

In exchange for watering the beds every other day, the firefights get to enjoy the harvest in their daily meals. That's according to Roger Kerr, Chief of the City of Bloomington Fire Department. In fact, he said he plucked some tomatoes out of the garden for his breakfast this morning.

"It's nice to walk out and have your fresh vegetables right here and not have to go get them at the grocery store," he says.

Usually firefighters bring their own breakfasts, and lunches are light because they're in the middle of work. But for supper, Kerr says meals the fire fighters prepare and eat together can range from a sandwich all the way up to a full-blown Thanksgiving meal.

What Are We Eating?

But if this was his backyard garden, the first dish he would make would be an omelette with spinach, basil and tomatoes.

For dinner, the garden has all the fixings to make a great tomato sauce. Throw in some of the beet greens and serve it over pasta.

If they want to add a little fire to their dishes, he recommends throwing in a chile or two. But beware -- these chiles are mean. "I had one of these the other day and it just bit me back."

While Chief Kerr doesn't enjoy spicy foods himself, he says the fire fighters find them plenty hot as well.

"If you're going to eat them be prepared."