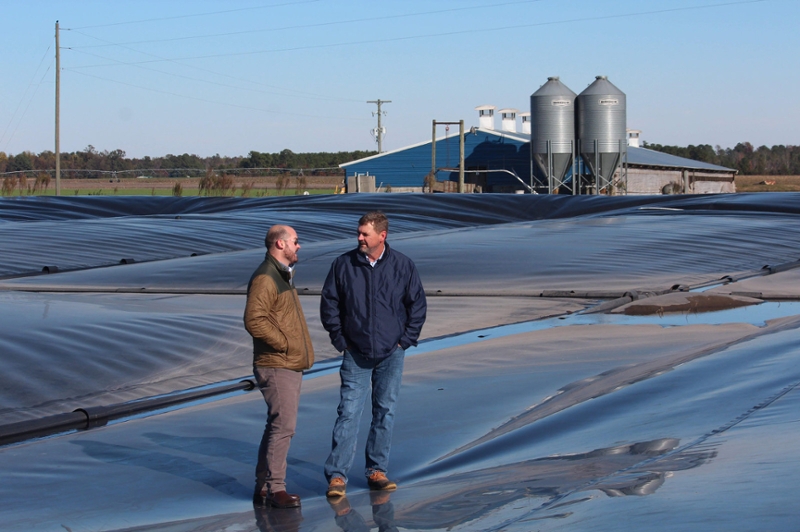 In a secluded corner of rural eastern North Carolina, at the end of a long and winding farm lane, a pit of stinking hog manure is doing its bit to save the world from climate change.

It may be a whiff of things to come.

"You're standing in the middle of about 12,000 head" of hogs, says Kraig Westerbeek, an executive at Smithfield Foods, the country's biggest pork producer. The animals live in rows of buildings nearby, eating and excreting. Their manure flows into a big pond, called a lagoon, right in front of us. This is the standard form of treatment for hog waste in this part of the country. In the lagoon, bacteria go to work on the manure, breaking it down.

On most farms, that gas just goes floating off into the air — and contributes to the overheating of the planet. Methane is a greenhouse gas with a warming impact at least 25 times greater, per pound, than carbon dioxide.

At this lagoon, though, the gas is trapped by a blanket of rugged black plastic that covers the manure pond. The gas lifts the plastic layer and makes it bulge like the floor of a child's bouncy castle.

The gas then gets pumped out to processing stations that remove water vapor and carbon dioxide. What's left is almost pure methane, also called natural gas, ready to burn in any gas-fired home furnace or electric power plant.

This basic idea — turning manure into energy — is not new. Many dairy farms are doing similar things, often using biogas on-site to power a generator.

But Smithfield and the electric and gas utility Dominion Energy have formed a partnership with much bigger plans. They want to expand this to industrial scale.

They're planning to spend $500 million building the infrastructure to capture methane from hundreds of hog farms, mostly in North Carolina. They'll connect farms with miles of underground pipes, collecting methane and feeding it into existing natural gas pipelines. If no pipelines are close by, the gas may have to be trucked to its destination.

"We've got audacious goals," says Ryan Childress, director of gas business development for Dominion Energy. "We've got half a billion dollars behind it. We intend to see that through and make a big difference for the environment, for farmers, and for customers who are looking for low-carbon energy."

This methane, in fact, is even better than "low-carbon." Since capturing it actually prevents greenhouse emissions, it's considered a zero-carbon fuel under the rules of emissions accounting. If you burn this "renewable natural gas," the carbon dioxide that's inevitably released isn't counted as part of your carbon footprint. In fact, because the reduction in methane emissions from manure lagoons far outweighs the carbon dioxide emissions from burning it, it's sometimes considered a "negative-carbon" fuel that cancels out other greenhouse emissions.

That's the key to this business: People or companies who are trying to reduce their carbon emissions will pay extra for it — perhaps twice as much as regular natural gas.

"What changed, fundamentally, is the market for renewable natural gas, [and] the market for carbon, have allowed us to develop a business model, an economic model, that works for everybody involved," Westerbeek says.

According to Smithfield and Dominion Energy, the project will capture about 105,000 metric tons of methane each year. That will reduce the country's greenhouse emissions as much as taking half a million cars off the road.

For people who worry about climate change, it's a clear win. Farmers also stand to earn more money, since they'll get a share of the methane sales.

Others, however, may not see much benefit. The manure lagoons at the center of this project are the focus of heated controversy in North Carolina for reasons unrelated to their greenhouse emissions. Some nearby residents would rather see them removed entirely.

"I think they can do better," says Devon Hall, who founded the Rural Empowerment Association for Community Help (REACH), which is based in Warsaw, N.C.

"There's at least eight to 10 swine operations within a 2-mile radius of where I live and work," Hall says. People who live near those farms have complained about the smell, especially when farmers spray waste on fields. Twice in recent years, manure lagoons have flooded during hurricanes.

Over the past two years, North Carolina residents have won a series of lawsuits that accused a Smithfield subsidiary of causing a public nuisance. Smithfield is appealing those verdicts.

"This is a classic case of greenwashing," says Blakely Hildebrand, an attorney with the Southern Environmental Law Center, which has called for stricter environmental regulation of the pork industry. Greenwashing refers to attempts by companies to paint themselves as friends of the environment for public relations purposes.

"Smithfield is saying that they're going to come in and cap these lagoons and solve this major climate crisis. But they're ignoring the nuisance conditions that led to these to these civil lawsuits in the first place," Hildebrand says.

Hall has not been involved in those lawsuits. But he, too, says he would "like to see some changes" at the swine operations. "There's a lot of things, a lot of issues that we would love to discuss," he says.

Community activists say that capturing methane, by itself, is not the answer. They want farmers to adopt new technologies for handling hog waste that get rid of lagoons altogether.

Some alternatives do exist. According to Smithfield, though, they cost too much to adopt on a large scale.