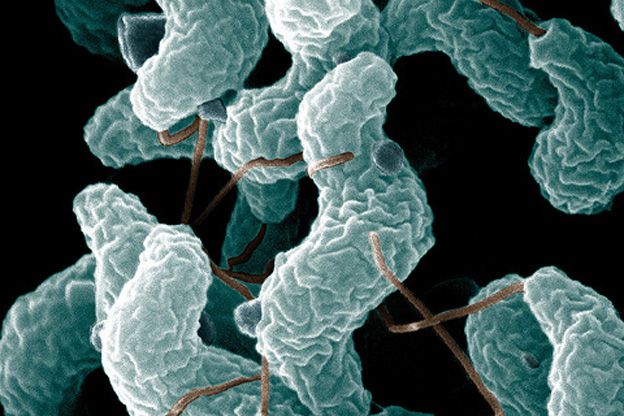 Recall after recall has hit the news. Cantaloupe, beef, even prepared salads -- is nothing safe to eat?

What makes food-borne bugs so virulent?

Here is a brief rundown of four of the worst food-borne offenders: listeria, E. coli, salmonella and campylobacter.

Listeria: The Bacteria That Thrives In The Fridge

In the recent cantaloupe outbreak, listeria was found on the outside of the melon. Cutting into the fruit with a knife could cause the bacteria to travel into the melon to be ingested.

Investigators are looking into the outbreak, already the deadliest in a decade.

Listeria can get into processing plants because it can be found in soil and water. The bacteria is a survivor -- it can hang around in plants for some time.

Listeria actually grows in cold environments, so keeping the melon in the fridge could make the risk greater.

Washing melons and other produce can reduce the risk of consuming listeria, but the CDC warns caution -- throw it out and clean surfaces the melon touched with bleach.

Symptoms of listeria infection include fever, muscle aches, diarrhea and other gastrointestinal problems. Symptoms can take over a month to appear.

The Los Angeles Times has a Q & A about the recent outbreak with infectious disease specialist Dr. William Schaffner.

E. Coli: It's Not Just For Beef

Found in a recent Tyson recall and a Georgia recall that was headed for school lunches, E. coli is commonly seen as something found in ground beef.

E. coli actually lives in the intestine, and a small amount is harmless to humans. However, some strains can cause illnesses, like O157:H7.

E. coli has been found on raw produce like spinach and lettuce in addition to undercooked meat.

Salmonella: The Most Frequently Reported Of The Bacteria

What that really means is undercooked poultry can contain the bacteria, and all poultry must be cooked thoroughly to kill the bacteria.

Salmonella makes it way onto produce by cross-contamination, either by raw meat or the unwashed hands of a handler. Reptiles can transmit salmonella, which could be potentially threatening to children.

Symptoms of salmonellosis can show within eight to 72 hours of consumption. They include nausea, headache, chills and vomiting.

Although the second-most reported cause of food-based illness, most campylobacter infections are isolated events, FoodSafety.gov reports. It can be ingested through raw and undercooked poultry, unpasteurized milk and contaminated water.

The incubation period is two to five days, and symptoms are similar to other food-borne bacteria infections: diarrhea, cramps, fever and vomiting.

Unlike the other bacteria mentioned, campylobacter is not usually recognized as an outbreak.

Avoiding campylobacter starts at the farm and ends at the home, the USDA says. Each step on the chain from farm to table has a role in avoiding contamination, from sanitary farms and food processing to vigilant recall efforts.

A Long And Winding Road

Food takes a long road to end up in the consumer's home refrigerator. The many hands it passes and the wide distribution can cause outbreaks to be widespread and devastating.

Many seek out local produce to avoid the large food and produce chains.

For all food-borne pathogens, the young, elderly and those with compromised immune systems are at the biggest risk. Thoroughly cooking meats and washing produce is important. Keeping raw meats and produce separate can avoid cross-contamination.

Are you worried the produce or meat in your fridge could have been subject to a recent recall? The CDC reminds consumers, "When in doubt, throw it out."