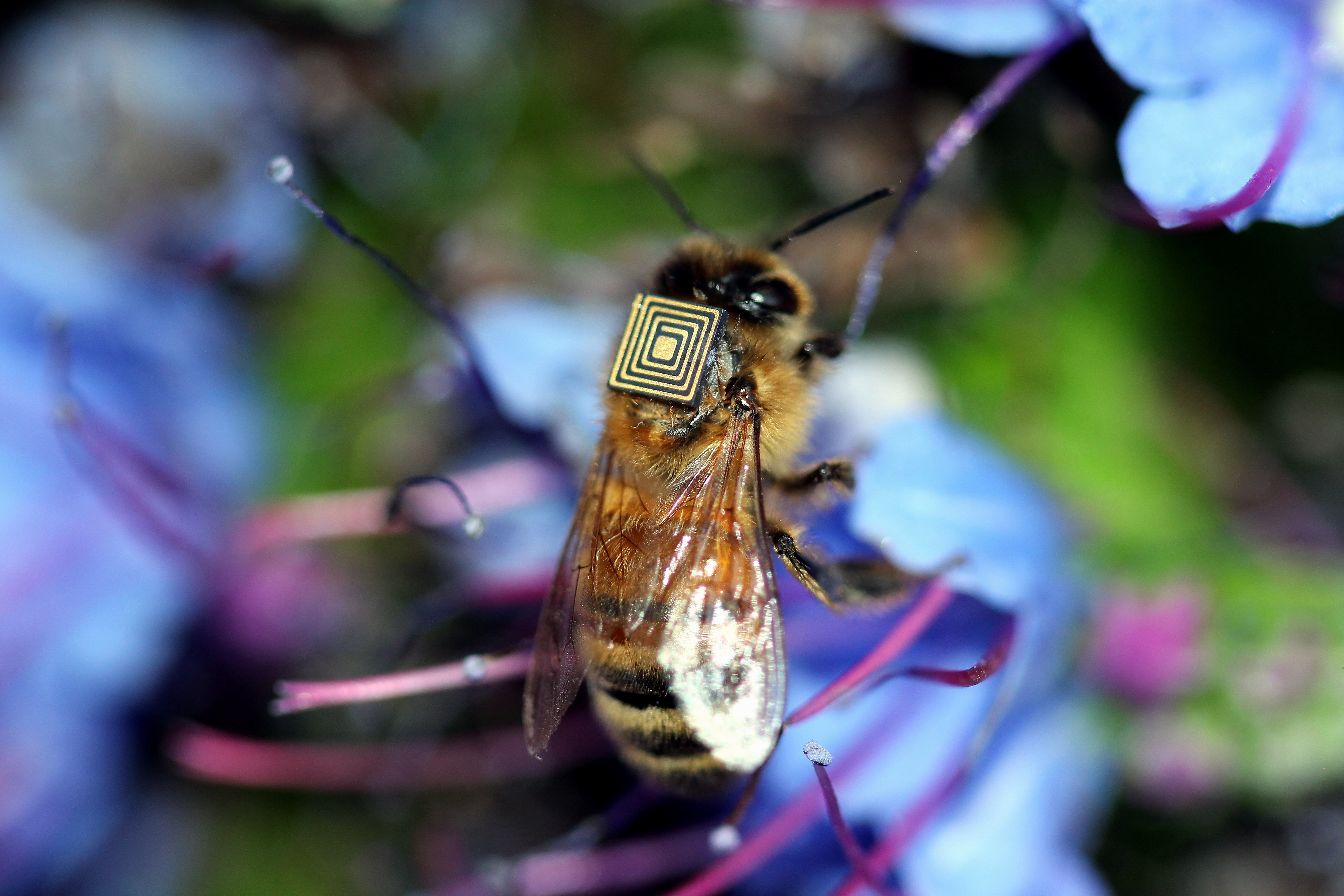 A team of hi-tech researchers in Tasmania has concocted a unique way to tackle the mystery of mass bee deaths around the globe. They're gluing tiny homing devices to the backs of thousands of bees, hoping to catch clues in the insects' behavior.

Some beekeepers have reported losses of 40 to 100 percent from an elusive phenomenon known as colony collapse disorder. The cause of the die-offs is unknown, but culprits include neonicotioid pesticides, varroa mites, viruses, or cell phone towers â€“ and the answer is likely a recipe of multiple factors.

At the Commonwealth Scientific Industrial Research Organization, scientists hope that data from 5000 sensor-toting bees will help solve the riddle. The team first chills the bees to make them sleepy, then shaves their fuzzy backs with tiny razors, and glues on a 2.5 millimeter square devices. They're released into the relatively pristine backyards of Tasmania, which is especially suited as a controlled environment. Another hive, outfitted the same way, is exposed to neonic pesticides.

"The effects are disorientation," said Paulo de Souza, the project's lead scientist. "They take much longer to come back to the hive, longer to leave the feeding stations, and behave in an inconsistent way."

Since the bee deaths are hard to link directly to pesticide exposure, tracking changes in bee behavior could shed light on subtle knock-on effects, like a short supply of nectar from logy workers, or even generational changes as larvae nurse on contaminated nectar.

The current devices cover a good portion of the insect's thorax, which reduces the amount of pollen it can carry by up to a third. Over the next 5 years, the team plans to make smaller and more advanced sensors to boost data collection. Breakthroughs in battery power and communication would allow researchers to track hives around the world in a central database.

By the end of 2014, they plan to cut the size by more than half. Ultimately the group hopes to develop a tracker the size of a grain of pollen capable of detecting temperature, moisture and wavelengths of light as well as the bees' position.

The same technology could be used to track mosquitoes or other disease-carrying insects. But with bees pollinating about two thirds of the world's food supply, de Souza said, the world could face dire consequences if hives continue to collapse.

"Food security in the world depends on bees," he said. "A collapse of bees could really bring a lot of conflict, economic problems, and many other issues for mankind."