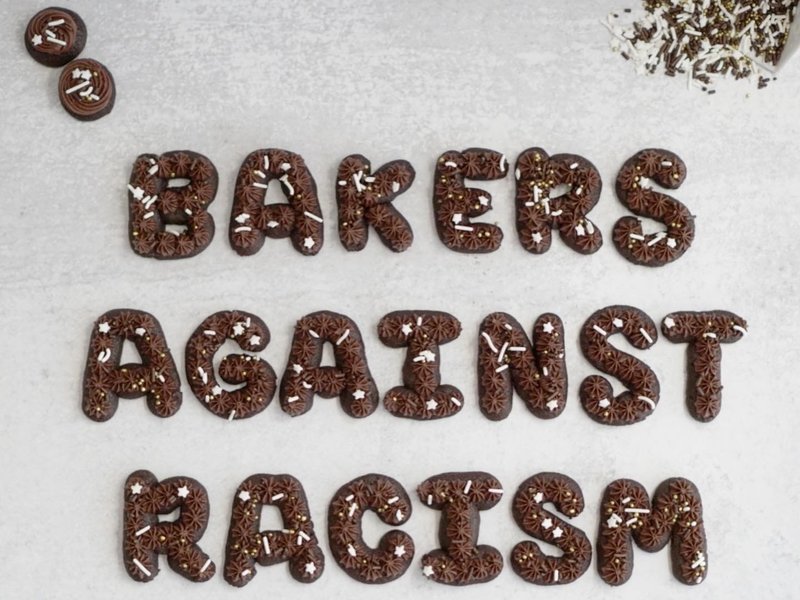 Across the world, bakers are selling treats to profit charities that support Black lives. Home baker Liz Rosado created these cookies as part of an announcement that she was participating in the event. (Courtesy of Liz Rosado)

With whisks in hand, bakers across the world went into their kitchens this week with the same goal: to fight racism.

They were preparing for their virtual bake sales as part of the Bakers Against Racism movement that was founded by three Washington, D.C., chefs. What started with a goal of 80 participants now has thousands of professional and home bakers raising money for organizations that support Black lives.

Pastry chef Willa Pelini was inspired to create the event after she watched protests unfold in Minneapolis and across the country following the police killing of George Floyd. Pelini reached out to fellow pastry chef Paola Velez about hosting a pop-up bake sale to support the Minnesota Freedom Fund. Velez had just finished hosting a Latin-American donut pop-up, Doña Dona DC, and Pelini wanted to see if they could collaborate using that same model.

With Doña Dona DC, Velez says she raised around $1,100 for Ayuda, an organization that provides services to immigrants in the Washington, D.C., area. But she says "it wasn't enough." She wanted her next endeavor to be bigger, and the thought of only being able to double the money raised in another pop-up with Pelini almost broke her spirit.

Velez told Pelini she needed to think about it and got to work on a plan to connect a network of cooks to host micro bake sales across the country. She then reached out to chef Rob Rubba, who made graphics. Velez created a shareable folder of resources for people looking to participate and wondering how to get started.

When Pelini reached out again, Velez told her she thought they should get more people involved.

"We could still pop up. We don't have to be next to each other. We can be socially distant, hosting micro pop-ups across the country," Velez says. "And if we get 80 bakers to join we would be able to make a huge difference."

They put out a call on Instagram to bakers and cooks of all levels who wanted "to fight and stand up against the unjust treatment of BLACK people in the United States. We are armed to fight racism with the tools we know how to utilize, our FOOD."

The goal was for each participant to sell 150 pieces of baked goods through presales and donate the profits to a charity of their choice that supports Black lives.

Their mission resonated with thousands, including home baker Liz Rosado of Brooklyn, N.Y. By day Rosado is a lawyer, but she says baking has always been an outlet for her.

"I'd been looking for a way to kind of channel a lot of the things that I'm feeling in this moment and do it in a way that feels productive and supports causes that are on the front lines doing kind of the real work."

Rosado didn't go to pastry school, so she loved that the pop-up was something anyone could participate in. She decided to make tahini Rice Krispies Treats, challah rolls and frosted cookies. She sold out of everything. Rosado says the sales enabled her to raise much more money for the Equal Justice Initiative than she thought she would.

"I am very impressed that my community stepped up," Rosado says. "What I initially was hoping would be a few hundred dollars turned into $6,000 with a match. And if that's just me and I know this is a national and global movement, I am so excited to see what the final tallies are."

In D.C., more than 100 bakers and businesses are participating, including The Sweet Lobby, which is offering a cupcake duo with sweet potato marshmallow and pineapple inside out flavors. Owner Winnette McIntosh Ambrose says they were inspired by the American South, Caribbean and West Indies.

"It's meant to reflect a little bit on the culinary traditions of the African diaspora as that pertains to West Indian cuisine from the Caribbean," she says.

The majority of the proceeds from The Sweet Lobby and Souk will go to the United Negro College Fund, an organization that McIntosh Ambrose says has given a ton to a lot of people, including herself when she was pursuing her doctoral and post-doctoral studies.

"Education for me is something that is super critical to support," says McIntosh Ambrose.

After the end of the sales on Saturday, the final tally will be done to see how much was raised. Then, Velez says the Bakers Against Racism account will turn into a platform to support and elevate chefs and bakers of color.

Note: This article originally appeared on June 20, 2020 on npr.org.