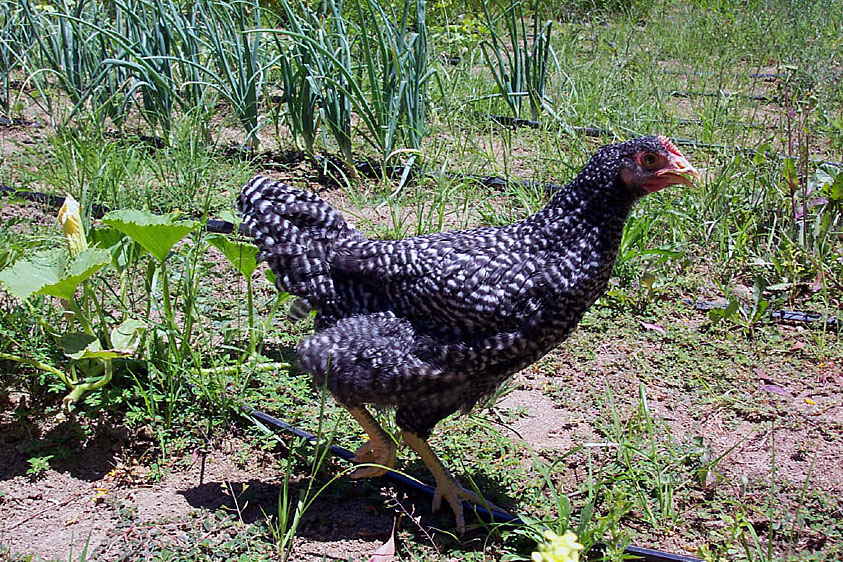 This week we're starting a three-part series where we're discussing the ins and outs of raising chickens in your backyard. We solicited questions from our Twitter followers and Facebook friends. Three veterans of the backyard chicken world have come into the Earth Eats studio to try to answer them.

Today it's all about how chickens can help -- and hurt -- a garden.

Chicks In The City

Annie Corrigan: Aleisha, what are the rules you have to follow since you live in the city of Bloomington?

Aleisha Kropf: You can have a limit of five birds. They all have to be hens, you can't have any roosters or cokerals. You have to have an enclosure for those birds that, I believe, is 60 square feet for five birds. That enclosure has to be a certain number of feet from every other building nearby -- from my fence, from the neighbors behind me. You no longer have to have neighborhood permission, although it's nice to tell them.

AK: That's a huge change that was made at the city council last spring.

Chicks In The Country

AC: You guys who are not in the city, is it just a free-for-all? You can do whatever you want?

TB:Â My experience is being still in the suburbs, and heavily suburbed -- I have neighbors on all sides. I don't want to say it's a free-for-all because there's a matter of neighborly courtesy that you have to keep with. As long as you check with all of your neighbors, make sure that if you let your chickens free range, which I do on occasion, they're not bothering them.Â I do have a rooster, which is one of those things that Aleisha can't have, even though we live in the same kind of area. You do want to check with (your neighbors), because at 6:00 in the morning, you'll have this animal screaming bloody murder in the backyard.

AC: So what are the perks of having a rooster other than this alarm clock?

AK: And predators. They help guard the flock.

TB: Absolutely, especially if you have your chickens free range. They will keep dogs away.

JW: What breed do you have?

TB: I have a Barred Rock Rooster.

AC: Let's talk about your birds, Jana, because you raise interesting chickens.

JW: In the American Livestock Breed Conservancy Listing, they used to be threatened. I believe they've taken a step up and now are critical. So, there are very very few of them. As time has gone on, a lot of heritage breeds have suffered this fate -- they're almost extinct because the production birds are just one or two different breeds. Farmers quit raising various different types of breeds in their backyards because it wasn't productive, it wasn't economical for them.

JW: They really are. The most distinctive feature about them is their comb, a circular cup on top of their head. I guess you could put an egg inside of their comb, it's a very large comb. The females are a beautiful golden color with black spangling form their shoulders back. They're great egg layers. They're like the Leghorn.

AK: Do they work as dual purpose at all? Do you eat them?

JW: I do eat them. They're not considered a meat bird or production bird. Like most egg laying birds, most of their energy goes into the eggs, so they're pretty skinny little things -- hence those wimpy males.

Getting Their Talons Dirty

AC: We talking about what you use your chickens for, eggs and meat so far. What are some of the other things chickens give you?

AK: I can answer that one, at least for us anyway. We got into it primarily from a pet standpoint because my daughter was interested in that. But as a family, we were interested in sustainability, gardening and producing our own food. Because some of ours have a pet designation, they're never going to marked for the axe, they just never will be. I use my chickens primarily for eggs. I also use their droppings for compost in all my gardens, and based on what I have planted where, I funnel them into different areas of my yard to do my tilling because they're much more efficient and I'm a really lazy gardener. If I can put my chickens in there for a day, and they can dig up everything and turn all the soil, it's better for me.

JW: You want to move them frequently because, as Aleisha said, they will tear up anything. If you want them to tear up stuff it's great, but if you don't, you have to keep moving them around or they will turn any patch of earth, grass into dirt.

AC: They don't eat the vegetables?

AK: I find that mine go for the bugs first.

TB: What I've discovered in regards to the vegetables and the bugs -- yes, they are absolutely going to go for the bugs first. But the problem is if you've got bugs on tomatoes, they will speer the tomatoes. They will actually destroy the tomatoes that way.

TB: It's delicious for them!

AK: There are ways around it. We have a small garden area and I do plant things that spill out over so they can eat what comes over the fence. There are people who plant a moat between their garden -- not a literal moat of water, but a dig-out so there's space so a chicken can't put its head through the fence and get the vegetables. Or, I'll plant various plants around my yard that they can free range in.

JW: They're tenacious. They'll stick their head out and really go for a lot if they're inside a fence

AK: I have a grape arbor that they are just... It's like grape Fort Knox!

TB: The clichÃ© is that chickens are dumb. While that may be, they're very wily. They're survivors.

Next time, Aleisha, Jana and Tom will talk about protecting their birds from predators.