At This National Forest In Missouri, Goats Take Care Of The Invasive Plants 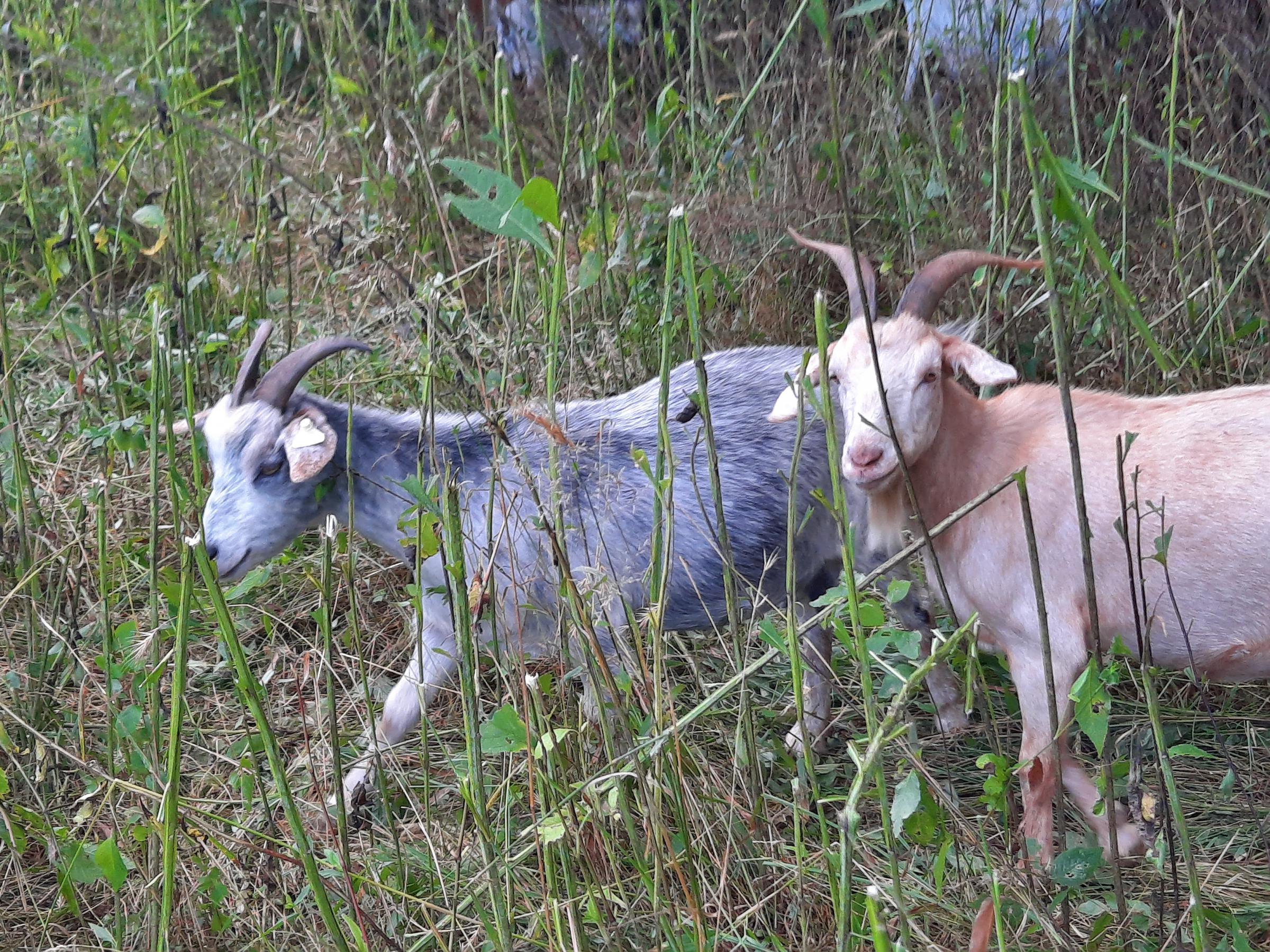 Two goats grazing in a field in the Mark Twain National Forest as part of an effort to control invasive vegetation. (JONATHAN AHL / HARVEST PUBLIC MEDIA)

Invasive plants such as blackberries and kudzucan turn a field from a grassy habitat for turkeys and quail into an overgrown thicket. But removing them -- particularly within a vast forest -- can be expensive or even harmful to the environment.

“They create a large canopy. They compete for nutrients. And then they push out and eliminate a lot of the desirable native species that we have,” said Brian Davidson, who manages the botany and invasive species program at the Mark Twain National Forest, three million acres of land spread out across southern Missouri in the Ozarks region.

So the forest has launched an experiment: deploying herds of goats to eat their way out of the proble

When unwanted plants, which can grow up to 10 feet tall, get out of hand, in come Loren and Elizabeth Steele and their goats.

The Elk Creek, Mo., couple has up to 1,500 Spanish goats that they take to landowners looking for a natural way to eradicate unwanted vegetation. They set up a portable, solar-powered electric fence around a designated area, and let the goats roam and graze.

Despite a reputation for eating anything, goats actually are picky, according to Loren Steele. The difference is that they will eat many plants that other grazing animals won’t touch. Plus, he said, they are not much of a grass eater.

The Steeles got into the goat business in 2017 as a way to keep trees from coming back to an area of their own land they had cleared.

“It’s a lot cheaper than running equipment over the land to get rid of those re-sprouts or to use herbicide. So we decided to use goats and then that started the process for us to look at what the goats eat and what they are effective on,” said Elizabeth Steele.

In just a day or two, they can chomp their way through a few acres of overgrown fields. And in addition to what they take away, the goats can leave behind something that can help the fields.

“They are defecating all over that. So that gets incorporated into the soil, and it’s a positive. What goes in comes out, right? And all of that has a lot of nutrients,” Davidson said.

Using goats to control vegetation isn’t new — the practice goes back to when the animals were first domesticated. What is new is the targeted approach and using precision planning to take out specific plants in particular areas.

The next step at Mark Twain might be to take the goats out of the open areas and see what they can do among the trees.

“We have a lot of native hardwoods that are encroaching and impeding pine regeneration and also not maintaining the openness,” said Davidson. “So we’ll try using goats in there to try and maintain that structure.”

Davidson thinks forests will increase their use of goats to help maintain land because they are cheap, effective and natural. (The Steeles’ contract pays $25,000.)