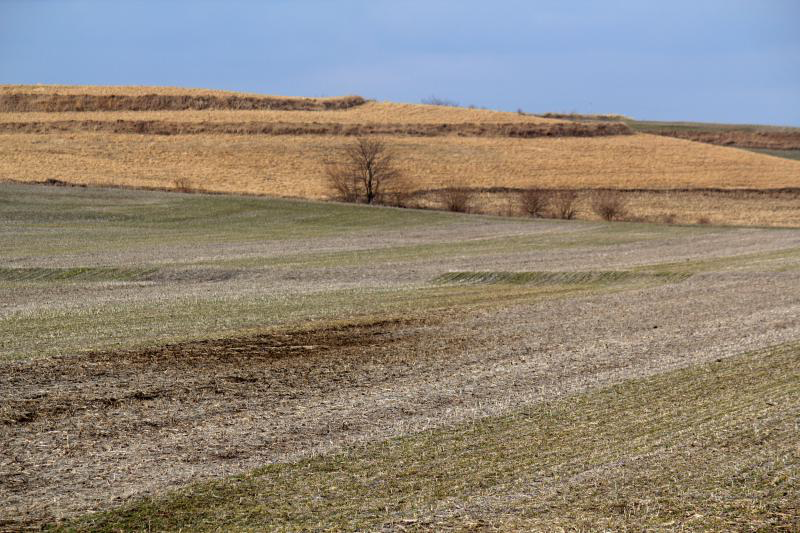 In addition to contributing to soil health and reducing erosion, cover crops have the aesthetic bonus of greening up fields early in the season. The photo was taken in southwest Iowa in February 2016. (AMY MAYER / HARVEST PUBLIC MEDIA FILE PHOTO)

Iowa Learning Farms and Practical Farmers of Iowa conducted a 10-year study on the conservation benefits of planting cereal rye as a cover crop on corn and soybean fields. Their results show the practice improves soil health. The cover crop may cause a slight dip in yields the first year or two, but that can be overcome and eventually small increases in soybean yields may occur.

The two agricultural non-profit groups use farmer-to-farmer education and on-farm field tests to expand growers’ understanding of different practices. The participants in this study agreed to plant strips of cereal rye as a cover crop on their corn and soybean fields, leaving neighboring areas without it.

Liz Ripley, conservation and cover crop outreach specialist with Iowa Learning Farms, says after working out some kinks the first couple of years, the results were so positive it was hard to keep farmers in the study.

“In the strips that had the cover crops, they didn’t see the level of erosion, right next door to the fields that did (erode),” she says. “And compared to those other fields that weren’t participating in the trial, they could see how the soil moisture even was changing over time.”

She says that’s thanks to having living roots in the soil between the harvest and planting of a cash crop.

Many participants bowed out after just five years to plant the cereal rye across their whole fields.

Ripley says the study sites were all in Iowa, but the findings should hold up throughout the Corn Belt in places where corn and soybeans are grown in rotation.

“They're going to see very similar results in terms of the impacts on crop yields,” Ripley says. “When it comes to some of the other variables, here in Iowa we have some really great soil. But a little further south, you know, they start with a little bit lower organic matter, and so they can have the opportunity for faster increases in soil organic matter.”

Ripley says where small yield losses occurred, farmers could usually associate that with problems in how they planted seeds into the increased residue left by the cover crop. By adjusting their planters to ensure corn or soybean seeds were placed at the necessary depth, they corrected the problem.

Cover crops will still cost a farmer in the short term, though Ripley says cereal rye is one of the least expensive options. And over the long term, she says cover crops are an investment in a farm’s future productivity.