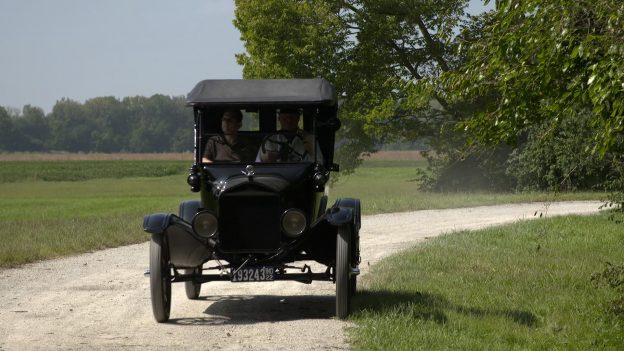 The Music Makers of Gennett Records premieres on WTIU Sunday, November 25 at 8pm. The documentary contains a treasure trove of magical stories about our musical heritage, including the story of a famous 1925 road trip that Hoagy Carmichael and his close pal Bix Beiderbecke made from Indianapolis to Richmond. At the time, Carmichael and Beiderbecke were in their early twenties and struggling to make a living for themselves in the early years of the Jazz Age. In 1925, Bix and his band were invited to record at the Gennett Studios. After an all-night bender at a downtown Indianapolis club, Bix asked Hoagy if he would drive him to Richmond for the recording session. Hoagy had never seen a recording studio before and thought the trip might be fun.

Fueled by audacity, youthful ambition, and nearly a quart of illegal, Prohibition-era gin, the two students hopped into Hoagy’s 1922 Model T Roadster and rambled along Highway 40 toward Richmond. Carmichael detailed the road trip in his autobiography:

“…About 4:00 in the morning we were worn out and headed for Richmond. While out in the middle of nowhere, we stopped and Bix took out his horn. He cut loose with ‘Way Down Yonder in New Orleans.’ Bix played as I had never heard him play, with only the cows and the corn to listen. I battled to keep up with him on my horn that I kept in the back of the car. When finished he said thoughtfully, ‘Hoagy, you weren’t bad.’ Great praise indeed!”

The trip proved fateful. Beiderbecke used the Richmond trip to springboard his now legendary career as one of the greatest cornet players ever. And, of course, Carmichael also benefited from the experience, using the opportunity to help launch his career as one of America’s all-time great composers.

Now, one century later, another 1922 Ford Model T Roadster was chugging its way to Richmond in a fun recreation of that famous road trip. This time, the man behind the wheel was Mike Archer, a member of the Model T Ford Club of Indiana. Our production team contacted Mike and asked if he would be willing to take his classic car out on the open road in order to capture the essence of that important, historic road trip. Our thanks to Mike and to the other members of the club for their help in recreating this important chapter in American music history.

No doubt there were more than a few confused looks on the faces of some 21stcentury farmers as they looked out their windows and saw an old Model T trucking down the road, followed closely by TV cameras and producers. It must have been an odd sight—perhaps just as odd as it must have been 100 years earlier if anyone else would have seen Bix and Hoagy with horns blaring during their impromptu “concert” in the Indiana corn fields. The Music Makers of Gennett Recordscaptures the spirit of this and many other rich stories of our American musical history. Buckle up! It should be a fun ride.

Todd Gould is a Senior Producer/Director of WTIU and the writer and producer of The Music Makers of Gennett Records. The documentary premieres Sunday, November 25 at 8pm on WTIU. Watch a trailer of the documentary here: