Alex Chambers: At his hilltop retreat in Brown County, the painter T.C. Steele carved into the mantel: “It has seemed to me that the greatest of all the arts is the art of living.” A century later, Bloomington writer and cabinetmaker Nancy Hiller has arrived at the same epiphany, in no small part thanks to dogs. Today on Inner States, and in partnership with Limestone Post magazine, Yaël Ksander brings us a review of Hiller’s latest:  Shop Tails: The Animals Who Help Us Make Things Work.

Yaël Ksander: A mourning dove with a broken wing. A mouse kept in a pocket. A parrot, a guinea pig, and an endless parade of cats and dogs. According to her latest book, Nancy Hiller’s never met an animal she doesn’t like, and isn’t willing to be seriously inconvenienced by. At the bookstore, Hiller’s Shop Tails: The Animals Who Help Us Make Things Work might easily get sorted alongside All Creatures Great and Small. Unlike James Herriot’s comfort reading, however, Hiller’s memoir isn’t a refuge from a less comfortable reality. Instead, it documents her separate peace with it.

Hiller had published a book about her life as a cabinetmaker in 2017. When I interviewed her about that book, Making Things Work, she insisted,

“I did not set out to write a memoir! Whenever I see people refer to this book as a memoir,  I feel a little embarrassed because I am not the sort of person who thinks she is worthy of writing a memoir.”

That imposter syndrome grips some of the most interesting and accomplished people is one of life’s great ironies! If the life of a woman who has distinguished herself over the past four decades in the overwhelmingly masculine orbit of fine woodworking is not worthy of memoir, whose is? Add to that

–Nancy’s Florida childhood wherein hippies built shanties in the backyard and shared psychedelic drugs with her;

–a stint at a Dickensian boarding school in England and eventual matriculation at Cambridge;

–her early 20s spent cycling to and from a furniture-making apprenticeship in a shop full of 19th-century lunch-pail types;

– a return to the academy in her 30s for a master’s in Religious Studies;

– an all-in approach to romantic relationships and the places they’ll take you;

–and an uncompromising dedication to her craft, come poverty, crippling health insurance costs, sleeping where you have to, and peeing in a bucket!

These and many other stories of the Rebel Girl who is Nancy Hiller can be found in her two memoirs – the first, of course, “about” cabinetmaking and this latest, of course, “about” animals. But just like your shrink might tell you that the thing you think you’re upset about is not the thing you’re really upset about, there’s a difference between subject matter and content. Even before this pair of memoirs, Hiller’s been known to use subject matter as  camouflage.

In her 2009 book The Hoosier Cabinet in Kitchen History, Hiller pushed a big old piece of furniture in front of her so she could actually talk about the evolution of women’s place in the home and the world. Hiller was at it again in 2011 with the lush tome  A Home of Her Own, which could easily have passed for a coffee-table book on decorating– IF you didn’t also read the stories of the women who had saved and transformed these old houses –  and in the process saved and transformed themselves. I called that fierce book “a wolf in sheep’s clothing.”

With Shop Tails, it’s more fun with animal disguises — to a point. But you won’t get too far into it without realizing that you’ve signed up for more than a book about critters. The merry tales of wee mice, naughty parrots, and kitchen restorations are bookended, interrupted, and interspersed with suffering, loss, and existential inquiry. And this time, there’s no ambivalence about the genre: “this work is largely a memoir,” Hiller states on the copyright page.  A small step for a woman, it’s a large step for womankind when a woman decides to take up space.

Shop Tails was written at a reckoning point. We learn early on that Hiller is facing a life-threatening illness. Recovery, she decides, will depend not only on medical treatment but on healing from childhood pain and the pattern it set up — constantly needing to prove her worth to others through achievement. While the book might be regarded as one more bona fide in a formidable series of them, it isn’t just another achievement; it’s an artifact of the deep healing Hiller knew she could no longer put off –

“I was dangerously dependent on outside forces, people who expressed their opposition, no less than their approval,” Hiller writes. “It suddenly felt deeply exhausting. … Whatever might happen with the course of my cancer, I was not going back to my old ways of living.”

The path toward a new way of living began in the hours before her chemo port was implanted. Putting aside decades of justifications, Nancy sat down and wrote a letter to her parents, a couple of talented and unusual individuals she had “long appreciated … as people” but “at a fundamental level … didn’t trust … as parents.”  Within an instant of receiving her parents’ open-hearted responses to her letter, “and this is no exaggeration” she insists —” the life I had made appeared in a new light.”

Shop Tails is a paean to that life Hiller has made, bathed in the new light that reconciliation and reorientation have afforded. Not unlike James Herriot, Hiller records the routines and pleasures of daily life and the flora and fauna (of all species) she has encountered along the way. But this book does not offer an escape from reality… it documents a mindful embrace of it.

That’s where Hiller’s specialization in re-envisioning period furniture and interiors comes in.  She respects what she calls the “authorial intent” of an original room and at the same time the need to adapt it “to suit the family who now lives there.” Hiller’s book prompts us to think of our own life as an old house — whether we grew up in a mansion or split-level, the place usually needs some restoration, rehabilitation, and creative reuse to be thoroughly functional, let alone fabulous.

Reinterpretation might in fact be the very antidote to the pain, loss, and suffering life brings. So much is beyond our control, Hiller concedes, “but we do have a say in how we respond.” After decades of gutting it out, producing objects for others’ approval, Hiller’s redefinition of the artist’s way is an act of survival: “making something constructive out of challenging circumstances is every bit as creative as baking a loaf of sourdough bread, building a canoe or assembling a kumiko panel.”

Even the renowned Hoosier Impressionist T.C. Steele would have agreed.  The mantel of his Brown County home was inscribed  – “It has seemed to me that the greatest of all the arts is the art of living.” Nancy Hiller comes to the same place, in no small part thanks to dogs. Because dogs, unlike most humans, have the good sense not to underrate the value of a predictable and contented life. Take Winnie, for example, Nancy’s beloved dog–

“Get up, go out, eat breakfast,” began her morning routine….“Make sure Mom, Dad and Jonas are safely off to work and school, then take a nap. Watch robins hop through the grass. ... Greet the family when they come home in the evening. … Go out in the dark and tell the coyotes they’d better not even think about coming into the yard overnight. Have a bedtime cookie and a drink. Lie down with Lizzie near the woodstove for the night.”  In other words, “a basic life of responsibilities, simple rewards, a loving family and rest well-earned.”

Hiller concedes that appreciating this lesson in  fulfillment took a while to sink in. Years later, in this especially uncertain time, her acceptance of a dog’s wisdom offers solace for us all.

Alex Chambers: Yaël Ksander reviewed Nancy Hiller’s book Shop Tails: The Animals Who Help Us Make Things Work, published in 2021 by Lost Art Press.  This review is produced in partnership with Limestone Post magazine, where you can read the review in its entirety. Limestone Post is an independent, nonprofit magazine focused on solutions-based journalism that covers the arts, outdoors, social-justice issues, and more in Bloomington and the surrounding areas. Tune in to Inner States March 6 for Yael’s next review, of debut novels by Bloomington-based writers Greta Lind and Denise Breeden-Ost. 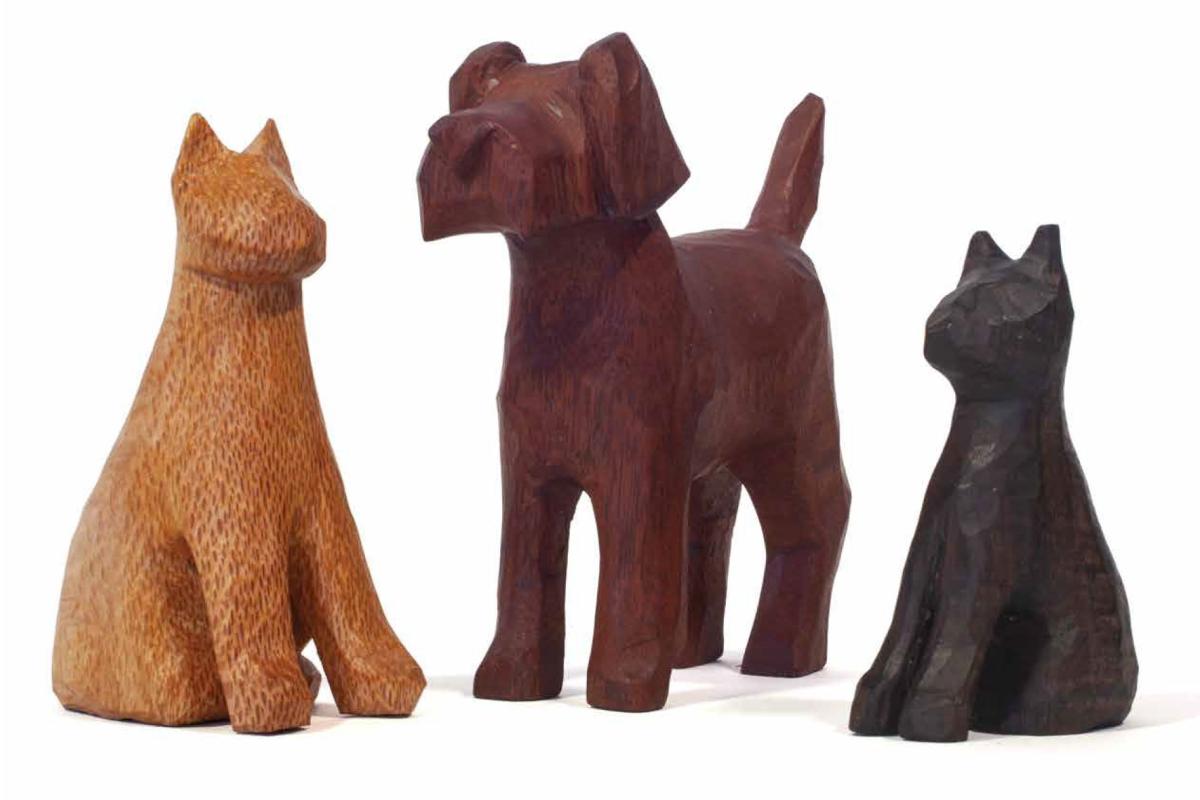 Yaël Ksander reviews Nancy Hiller’s book Shop Tails: The Animals Who Help Us Make Things Work, published in 2021 by Lost Art Press. This review is produced in partnership with Limestone Post magazine, where you can read the review in its entirety. Limestone Post is an independent, nonprofit magazine focused on solutions-based journalism that covers the arts, outdoors, social-justice issues, and more in Bloomington and the surrounding areas. Tune in to Inner States March 6 for Yael’s next review, of debut novels by Bloomington-based writers Greta Lind and Denise Breeden-Ost.