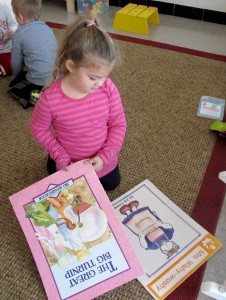 A student at Busy Bees Academy, a public preschool in Columbus, flips through books before story time.

Bear with us — you’re about to read yet another post about pre-K funding in Indiana.

Gov. Mike Pence says providing preschool vouchers to low-income families is his No. 1 priority for the 2014 session. But as we’ve written before, finding the cash to pay for such a program will be tough in a non-budget year.

Sen. Luke Kenley, R-Indianapolis, told StateImpact last month that everyone may be talking about pre-K, but he hasn’t seen a substantive plan for state-funded preschool.

“I think we’re kind of getting ahead of ourselves because it sounds like the right thing to do,” says Kenley, who chairs the appropriation committee. “Everyone talks about in very nebulous terms on a glowing basis. I don’t think we’ve done any work to figure out what we want to do on that.”

Pence offered a few specifics this week when he unveiled his education agenda in Corydon — he thinks the state’s best bet is a targeted program for low-income families. The mechanics would look a lot like the state’s private school voucher program for K-12 students, with eligibility up to 185 percent of the poverty level.

Let’s Do The Pre-K Math (Again)

The numbers haven’t changed much since we wrote about pre-K funding in the spring.

Between 40,000 and 45,000 Hoosier kids would qualify under Pence’s proposal. Federally-funded Head Start programs already serve roughly 14,000 of these students, according to a recent estimate from Indiana University’s Center for Evaluation and Education Policy.

Let’s assume, then, that there are close to 30,000 kids eligible for Pence’s plan.

Let’s also assume the program would cost roughly $4,200 per student — that’s the “magic number” we’ve heard a lot when writing about the pricetag at which pre-K is viable. (That isn’t too far off from the maximum K-8 voucher amount, $4,500.)

Those two assumptions put the price tag at $126 million, though it’s unlikely every eligible family would take advantage of the vouchers.

Chalkbeat Indiana‘s Scott Elliott talked to Kenley after Pence unveiled his education agenda, and it sounds like the appropriations committee chairman is sticking by what he told us in November:

The time for that is the next budget year, 2015, unless Pence wants to also propose a way to fund his education plans, Kenley said.

“We can’t start down the path of funding special projects unless someone wants to come up with a tax or a special revenue source,” he said. …

Pence does not want to wait, especially on prekindergarten programs, according to a spokeswoman.

“Governor Pence and his staff are continuing the important conversation that started in the last legislative session regarding the design of a pre-K strategy that will serve the most vulnerable Hoosier students, and we want to get those programs started as soon as possible,” Pence spokeswoman Kara Brooks said.  “Authorizing pre-K in the coming session will allow enough lead time for programs to be in place for the 2015-2016 school year.”

House Education Committee Chairman Bob Behning, R-Indianapolis, says elected leaders want to find a way to fund pre-K this session. But the same state lawmakers were reluctant to commit $7 million to a preschool pilot program this spring, and that was in a budget year.

What passed out of committee was actually a childcare bill — a way to improve the state’s Paths to Quality rating system for daycare providers. According to early learning experts, only providers rated at a level 3 or 4 would likely meet the definition of “high quality” preschool. That’s less than a third of programs currently participating and probably means they would soon reach capacity.

But whether Indiana can afford the up-front investment is a question Pence and state lawmakers will have to work out in 2014.