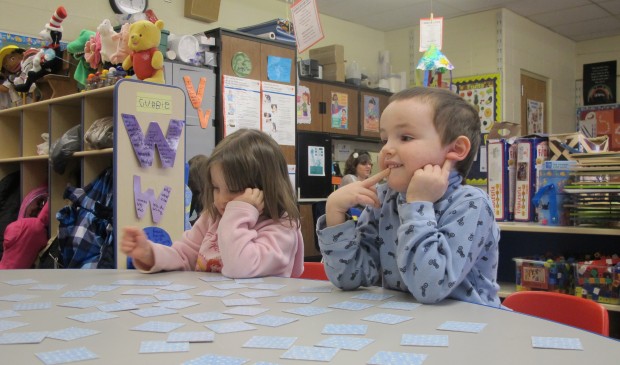 President Obama announced last month he wants to make preschool available to every 4-year-old in the country. He’s proposed a cost-sharing program with the states to enroll more students from low- to middle-income families in high quality early childhood education.

Currently Indiana is one of 11 states that doesn’t provide public money for preschool, but that could change if the General Assembly approves a small-scale pilot program this spring.

Early education advocates say the conversations around pre-K are encouraging. But they’re also concerned about the quality and cost of the program.

“We heard the president talking about elevating the salaries of pre-K teachers,” says Indiana Head Start Association Executive Director Cheryl Miller, “but knowing how our programs are funded, I’m sure a lot of Head Start folks were scratching their heads and saying, ‘OK how do we bring our teachers to the point where they make the same kind of money as school employees?'”

Why Head Start Wants To Add More Teachers With Degrees

A proposed pilot program to help low-income Hoosier families pay for preschool has the support of Gov. Mike Pence. But even if Indiana lawmakers give state-funded pre-K the green light, the pilot would be small — only 1,000 students. 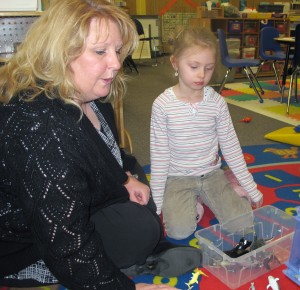 So for now federally-funded Head Start is one of the few options low-income Hoosier families can access. The program in Fayette County Schools serves about 160 students. In Kathy Ammerman’s class at Eastside Elementary in Connersville, kids are stacking blocks and cutting shapes out of play dough.

“With 3- and 4-year-olds, if they’re making noise, they’re learning,” says Ammerman. “You wouldn’t go into a first grade classroom and hear that level of noise. No.”

Ammerman has degrees in both K-6 and early childhood education, two teacher preparation programs she says are very different. She says when Head Start has hired licensed K-12 teachers to work in preschool classrooms, they’ve had to readjust their thinking.

“Those teachers tended to struggle with what appropriate expectations are and how you get children to where they need to be,” says Ammerman. “It’s in how you set up a classroom that is not necessarily about direct instruction but sharing that learning with the children.”

Why Preschool Teachers Are Leaving For Public Schools

Across the country, Head Start hopes to boost quality by employing more teachers like Ammerman — the goal is by the end of the year for 50 percent of the program’s workforce to have a bachelor’s or master’s degree. Indiana is on track to meet that goal.

But there’s a problem: The average salary for a Head Start teacher in Indiana is less than $25,000. That drives many early educators with degrees to leave for kindergarten and first grade classrooms where they can make a lot more money, says National Institute for Early Education Research Director Steve Barnett.

“If you’re in a labor market where for the same skill set, you can increase your pay by almost double — you’re going to do that,” says Barnett. “Very few teachers are going to stay year after year and pay that kind of price for the pleasure of teaching very young children.”

Last year Head Start turnover was about 16 percent statewide. That figure includes not just classroom teachers but part-time aides and support staff. But in Ammerman’s district, where early educators with degrees make the same starting salary as other teachers in the school — about $34,000 — turnover was less than one percent.

How Indiana Could Build On Existing Pre-K Infrastructure

So where do you start? With existing childcare providers. When Barnett’s home state of New Jersey began its urban pre-K push, 75 percent of students were already in some form of preschool. She tells StateImpact: 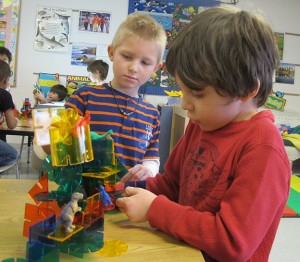 Rather than take them out and put them in private school, what we did was offer to double the pay — for those teachers in private programs and Head Start — if they went back to school, got a degree, got 15 credits in early childhood and were part of a system where they had coaches working with them in their classrooms continuously to improve their quality. We raised the quality of those programs from poor-to-mediocre to good-to-excellent, and it’s mostly the same teachers.

Some early education advocates make hard-and-fast distinctions between childcare and preschool. But not Tina Pender, the education coordinator for Monroe County United Ministries.

Pender oversees the curriculum for the four classrooms of 2- to 5-year-olds at the Bloomington childcare center. It’s both licensed by the state and accredited by the National Association for the Education of Young Children, the same organization that certifies many Head Start classrooms. 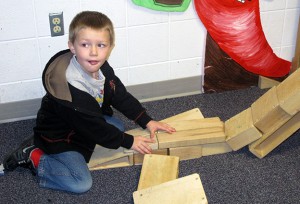 A child builds a bridge with blocks at the Monroe County United Ministries childcare center.

“Most people don’t understand that we’re teaching science, and math, and social studies, and creative expression. We hit all of those things the very youngest of classrooms, all the way up,” says Pender.

Low-income families pay an average of $45 per week for childcare — the actual cost is more than $200 — and there are almost as many kids on the waiting list as the center can serve. That means relying on outside donations and sponsors to stay open. There isn’t much left for teacher salaries.

“We are very limited in how we hire,” says Pender, who has an associate’s degree and plans to go back to school in the spring. “It would be fantastic to be able to hire only people with four-year degrees in early education, but what we do is provide extensive training.”

Pender says the NAEYC accreditation standards help ensure quality in the classroom. All of the center’s teachers have early childhood education certificates, and many continue their education while working at the center.

“You don’t do this for the money,” says Pender. “You do this to make a difference in the life of each child. I can’t think of one staff person that doesn’t feel that way.”